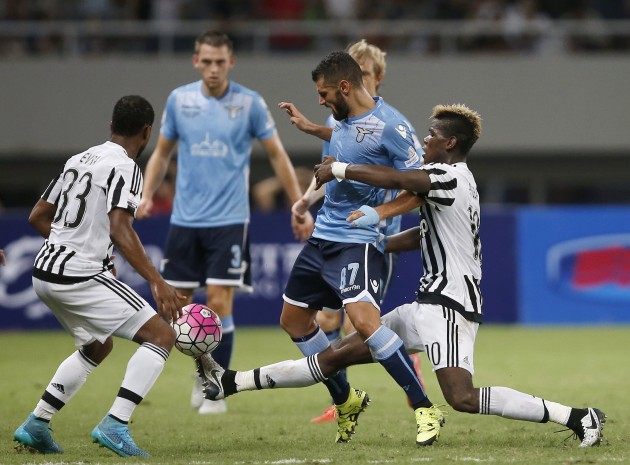 Ready, steady, Go – the new Italian season got off to a familiar start last weekend when Old Lady Juventus lifted yet another trophy, defeating Lazio 2-0 in Shanghai to win the Italian Supercoppa. It is a bit early to be drawing conclusions but you would have to say, even now, that the Old Lady remains the favourite to win a fifth consecutive league title.

If watching Juventus win represented a familiar sight, so too did the polemics surrounding the quality of state broadcaster RAI’s coverage of the match.   The TV production was admittedly less than perfect. On occasion, the ball went missing.  On other occasions, relatively unimportant replays were shown whilst potentially important action was taking place.  Close-ups did not always feature the correct player whilst some of the wider-angle shots made it seem as we were watching from a nearby mountain top.

A typical piece of production genius concerned the ritualistic post-match awards ceremony. Can you guess what the producer did just at the moment that Juventus captain Gigi Buffon was about to raise the winner’s Cup?   Yeap, he switched shot to the Shanghai stadium crowds. By the time, we got back to Buffon, he had already raised his winning trophy to the heavens.

This is hardly a major issue but overall, the TV direction managed to annoy many of those Italian fans who had come in off the beach to watch the game on a hot August Saturday afternoon  (the match was played at 14.00 hours Italian time, 20.00 hours Shanghai time).

Less than flattering comments sprouted all over Twitter with perhaps the most printable of these being that of fan, @PierpaoloRubeo, who thanked the state broadcaster for taking him back in time to the ’80s.  That, of course, was a time when TV coverage was far removed from the fantastically high standard that modern day fans take for granted when watching World Cup, European Championship finals or indeed top flight leagues such as the Premiership, the Spanish Liga or the Bundesliga.

As for state broadcaster RAI, it was caught between a rock and a hard place in that whilst it transmitted the images of the game, they had had no control over the production of those same images.  These were produced by the local Chinese company, UVS Ltd.

As for the football itself, the game did suggest one thing very clearly. Those, like this writer, who wondered if Juventus would be able to get their act together in the wake of the departure of fundamental players such as Argentine Carlos Tevez, midfield ace Andrea Pirlo and midfield dynamo Chilean Arturo Vidal could be mistaken. Not for nothing, both goals were scored by Juve new boys, Croat Mario Mandzukic and Argentine Paulo Dybala.

Little wonder that after the match, Juventus coach Massmiliano Allegri commented: “Against Lazio, it’s never easy but, in truth, I’m almost surprised by our performance, we gave away almost nothing. This was thanks to our good mix of young and old players, that’s our strength.

“Both I and the club knew that, after four years of success, certain difficult choices had to be made. You have got be patient, our young players have a lot of quality but you have got to give them time.”

Certainly, it would seem that there is reason for the Old Lady to look forward to the new season with plenty of confidence.

*********************
Do comebacks ever work?  Sampdoria are about to find out since last weekend they concluded the signing of the “enfant terrible” of Italian football, 33-year-old Antonio Cassano, former (in chronological order) Bari, AS Roma, Real Madrid, Sampdoria, AC Milan, Inter Milan and Parma player. Four years ago, the tempestuous Cassano stormed out of Sampdoria after a bitter row with then club owner, the late Riccardo Garrone.

Sampdoria coach Walter Zenga is reportedly not wildly enthusiastic about this return  of the prodigal son. We can understand his reservations. After all, in the past, Cassano has managed to fall out with coaches such as Fabio Capello and Massimiliano Allegri whilst his much-reported “cassanate” (Cassano pranks), often involving women and alcholol, have often been far too colourful to retell in any respectable publication.

Most recently, Cassano proved one more time that he is nothing if not a freethinker by abandoning the sinking Parma ship last January, telling Italian TV that he had torn up his contract because (a) he had not been paid since July 2014 and (b) for the lack of clarity from the club’s owners, past and present.

Cassano was last seen on the world stage when coming on as a substitute in Italy’s first round defeats by Costa Rica and Uruguay at the Brazil 2014 World Cup. In the fallout from Italy’s elimination, Cassano was singled out by many critics as one of the major disappointments in coach Cesare Prandelli’s Italy team. In the meantime, “bentornato”.