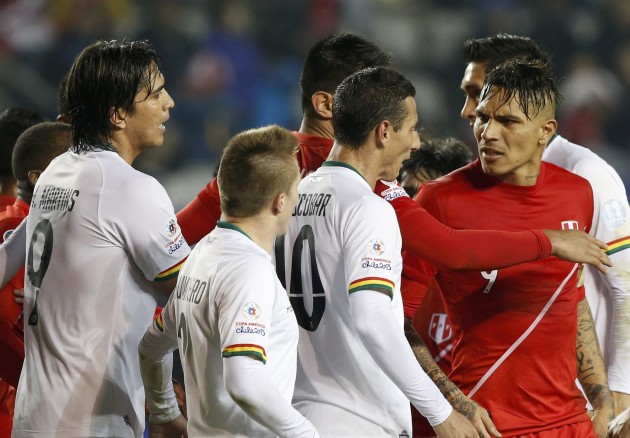 Two months ago, Bolivia may have been lowest of all the South American national teams in the FIFA rankings, but there was a reason for the country’s football to have a smile on its face. After a creditable goalless draw with Mexico in the team’s Copa America opener, on June 15th Bolivia beat Ecuador 3-2 to ensure a place in the quarter finals of the competition – the first time they had made it out of the group since 1997, six Copa ago, when they hosted the competition.

That feelgood moment seems a long time ago – and not because Bolivia then lost next two games in the tournament. True, the 5-0 thrashing at the hands of hosts Chile was hardly a morale boost, but with a place in the last eight already assured, coach Mauricio Soria fielded an understrength team. And then in the quarter final they were unable to cope with Peru centre forward Paolo Guerrero and went down 3-1, but at least they showed signs of defiance in defeat. Backed by the extreme altitude of La Paz in their home games, the Bolivians were entitled to feel that a place in the 2018 World Cup might not be a complete impossibility.

It may still happen. But there can be no doubt that the bizarre soap opera which has played out over the last two months has made their task appreciably harder.

The problems began soon after that game against Ecuador on June 15th, and as a direct result of the victory.  With Bolivia now qualified for the quarter finals, there was a row about bonus payments. Coach Soria was accused by Bolivian FA officials of inciting his charges to press for more money. Carlos Chavez, FA president and one of the few leading South American directors present at the Copa, was not impressed. A few days after the competition, on July 13, he declared that Soria’s reign had come to an end.

“Soria’s position is unacceptable to the FA,” he said. “He has taken some inadequate positions and for this reason we are going to sit down with him and negotiate an amicable separation.”

But less than a week later, Chavez was no longer in a position to negotiate anything. In his third term as president, Chavez was arrested as an investigation was carried out into the financial affairs of his organisation.  He remains behind bars, with other leading directors placed under house arrest.

Meanwhile, the clock has been ticking. The national team are back in action at the start of September, playing friendlies that will prepare them for the World Cup qualification campaign, which kicks off in some seven weeks’ time. The new FA Executive Committee started to panic. Who would coach the team?

Last Monday they hit on a novel solution.  Since before his arrest Chavez had not had time to negotiate the terms under which Soria was being sacked, why not just pretend that the sacking had not happened?  Erwin Peredo, president of the Blooming club was placed in charge of the negotiations – chosen in part because until the end of last year Soria was coaching Blooming.

Soria, though, refused to play ball. Last Friday he declined the offer to be ‘unsacked.’ “I believe that the conditions necessary to work are not present,” he said.  “Some of the directors continue trying to manipulate my name, and in this context the public should know that I’m not staying on, and that I have accepted the situation that was clearly expressed on July 13.”

The entire saga reads like a lesson in how not to prepare for the most competitive World Cup qualification campaign on the planet. Then again, Bolivia managed to make the Copa America quarter finals despite breaking all the rules of sound preparation.

Late last year they even managed to play three games under three different coaches. For September’s defeats against Ecuador and Mexico, the veteran Spaniard Xabier Azkargorta, who took them to the 1994 World Cup, was still in charge.  Soria came in on a caretaker basis for October’s brave 2-2 draw away to Chile.  He picked the squad for the following month’s game against Venezuela. But he then got himself involved in a political row. At the end of Blooming’s visit to Real Potosi, one of his ex-clubs, he appeared to insult the people of the host city. It caused a furore, and with temperatures running high, the Argentine Nestor Clausen took charge for the 3-2 win over the Venezuelans.

After things had cooled down, Soria was formally appointed earlier this year. But preparation time was limited. Alone of the South American nations, Bolivia were not in action in the FIFA dates at the end of March.  Instead, they pulled out of a trip to Nigeria, using the political situation in the African country as a pretext for withdrawing from a fixture which they plainly no longer wanted to fulfil. And so they had just one warm up match before the Copa, collapsing 5-0 against Argentina and giving a performance which inspired no confidence whatsoever in their chances of making progress in the tournament in Chile.

Instead, they rallied and did better than expected. Can they now overcome all the obstacles they have placed in their own path and put in a challenge for a place in Russia?

It looks as if they are turning for guidance and leadership to a Spaniard called Portugal. Miguel Angel Portugal is a former Real Madrid midfielder, and also coach of their B team, who had a successful spell in charge of the La Paz club Bolivar in 2012-13. He is due back in Bolivia in the next few days, seemingly willing to step into all the high drama at high altitude.