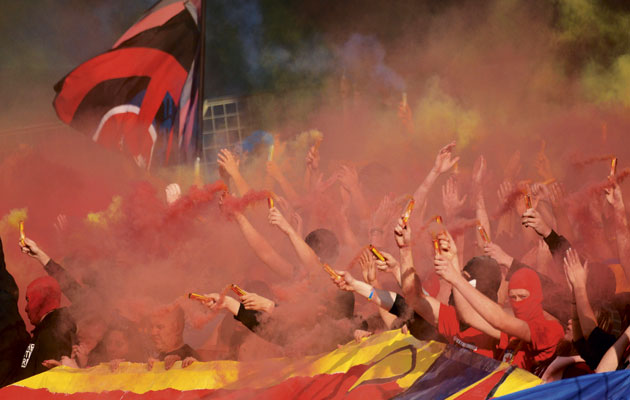 With some pride, the Czech Republic hosts the most prestigious football tournament in its history, from June 17 to 30. However, in the absence of any stadium with a capacity in excess of 30,000, the eight-team European Under-21 Championship represents the pinnacle of Czech ambitions in this area.

Not surprisingly, the country is making the most of the event, but away from the tournament’s smart stadiums and picturesque host cities, the domestic game remains a tangle of traditional power, new money and occasional dirty deals, all constrained by the economic realities of life in a post-Communist country.

In many ways, the four clubs whose home grounds will host the tournament – Slavia Prague, Sparta Prague, Sigma Olomouc and Slovacko – typify these contrasts.

Group A will be staged in Prague, at the homes of Czech football’s two biggest rivals: Slavia’s Eden Arena – which will also host the Final – and Sparta’s Generali Arena. Group B is split between Andruv stadion in Olomouc and Slovacko’s Stadion Miroslava Valenty in Uherske Hradiste. 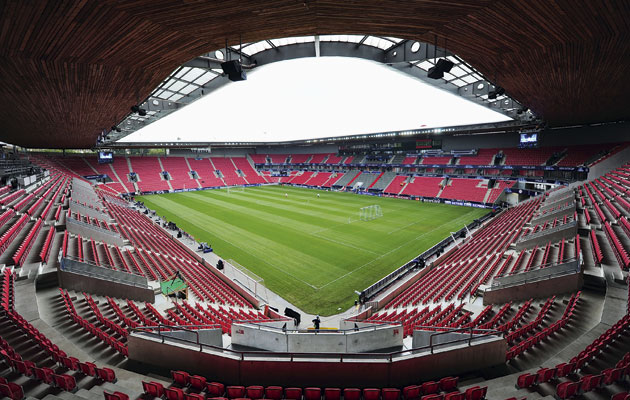 Slavia are traditionally the club of Prague’s middle class and were Czechoslovakia’s most successful club in the first half of the 20th century. However, the “Sesivani” suffered under Communist rule and didn’t win the league again until 1996.

The Eden Arena in Prague’s Vrsovice district has been Slavia’s home since 1953, when the Communist regime forcibly relocated the club to make way for a giant statue of Stalin. But when requirements for stadiums forced the club – then owned by ENIC, Tottenham Hotspur’s owners – to completely rebuild the ground, they spent several years in exile, playing home games at Strahov, before a new 20,800-capacity Eden was opened in 2008.

Playing in the country’s largest arena, Slavia won the league in their first season at the newly opened Eden and a new era beckoned. But, seemingly poised to overturn Sparta’s dominance of Czech football, Slavia instead got into serious financial trouble.

The problems began in January 2008 when Slavia’s board apparently allowed Key Investments, a shadowy Czech securities company, to take control of the club without ENIC’s consent.

A protracted legal dispute followed as ENIC attempted to reclaim loans it had made to Slavia. Plagued by debts, the club came close to declaring bankruptcy and was forced to sell its interest in E Side Property Limited, the company that owned the new stadium.

The financial situation has since stabilised under current owner Ales Rebicek, a controversial former politician, but money remains tight.

In September last year, Rebicek struck a deal with Vinet, E Side’s successor, to bring the club and stadium under common ownership again, with a view to making the club more attractive to would-be buyers.

Eden, meanwhile, remains an impressive stadium which was good enough to stage the UEFA Super Cup game between Chelsea and Bayern Munich at the start of last season. The irony for Slavia fans is that their own team is now far more focused on avoiding relegation than challenging for Europe. 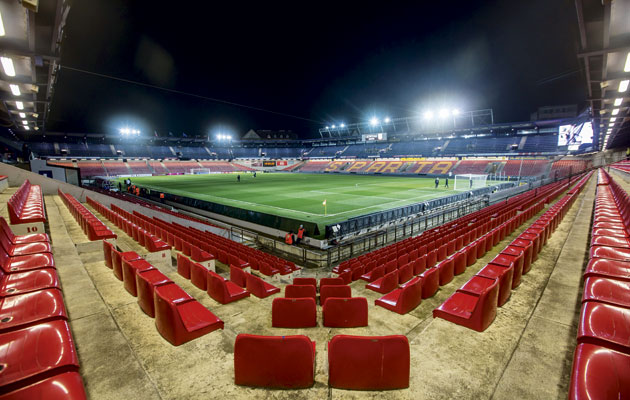 Commonly known as Letna, Sparta’s Generali Arena will host three group games and a semi-final this summer. With a capacity of 19,784 the ground is slightly smaller than Eden but remains the first choice for international games, reflecting Sparta’s dominant position in the post-Communist era.

The original Letna stadium dates back to 1917, although both Sparta and Slavia were playing games in the park of the same name at the end of the 19th century. The stadium’s current appearance owes much to the former Sparta owner Petr Mach, who transformed the ground into a modern all-seater in 1994. Subsequent improvements saw Letna host Sparta’s first Champions League group games in 1997 – the first of six such campaigns.

In recent years, however, qualification for the Champions League has become more a hope than an expectation, partly due to the emergence of provincial club Viktoria Plzen as a new force in Czech football.

Pelta was impressed, describing the evidence as “devastating” and handed it over to the authorities. In January last year, however, a court cleared Martin “Rattlesnake” Svoboda, the man alleged to have acted as Plzen’s go-between.

Another headache for Kretinsky, and for Czech football as a whole, is crowd trouble. A growing hooliganism problem reached a head in March 2014 when fighting broke out between fans of Sparta and their bitter rivals Banik Ostrava during a televised league game. In the wake of the Ostrava riot, Pelta has worked with the interior ministry to improve security in Czech stadiums, with measures including closer co-operation with the police, the creation of a database of known troublemakers and more stringent checks outside stadiums.

The lengths to which the FA is prepared to go to ensure security became apparent at last season’s Czech Cup Final between Sparta and Plzen at Eden Arena.

Amid fears that the game would be targeted by radical hooligans, the FA limited ticket sales to small groups of supporters behind each goal. The measures were effective but they ruined a potential showcase.

Less successfully, Pelta has also tried to curb obscene chanting in stadiums, encouraging referees to halt and potentially abandon games whenever it took place. The widely ridiculed initiative has been dropped this season. 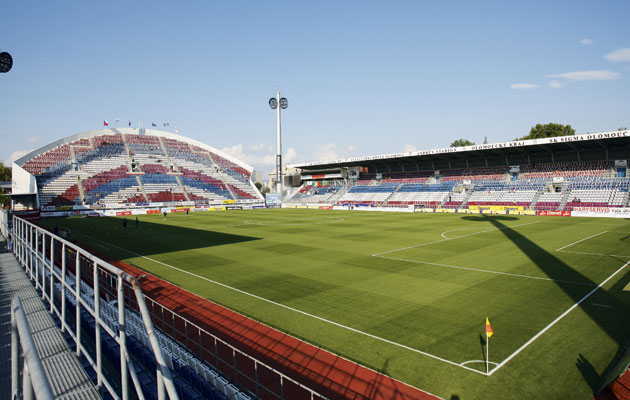 Moravia, the eastern region of the Czech Republic, will stage Group B in two smaller stadiums. In addition to three group games, Olomouc, the Czech Republic’s sixth-largest city, will also host one semi-final. The pretty university town is home to Sigma Olomouc, currently in the second division but still one of the country’s better-supported teams.

In many ways, Sigma are a typical provincial Czech club in that they are dependent on their youth system for playing talent and revenue.

Formed in 1919, the club didn’t break into the top flight until the 1980s but then established themselves as one of Czech football’s major players under future national coach Karel Bruckner in the 1990s.

They were, however, at the centre of a notorious match-fixing scandal in 2010 in which their then-goalkeeper Petr Drobisz was accused of bribing players from his former club, Bohemians of Prague, to throw a league game between the two sides. Olomouc were fined 4million Czech koruna (£105,000) and docked nine points for their part in the scandal. They were also later banned from taking part in the 2012-13 Europa League, while Drobisz was cleared of any criminal activity but still served an 18-month ban.

Sigma avoided relegation and bounced back from the scandal to win the Czech Cup – their first major trophy – in 2012 but were relegated two years later.

Currently co-owned by a partnership of businessman Josef Lebr, the Olomouc city council and a not-for-profit fans group, the club is on course for an immediate return to the first division. 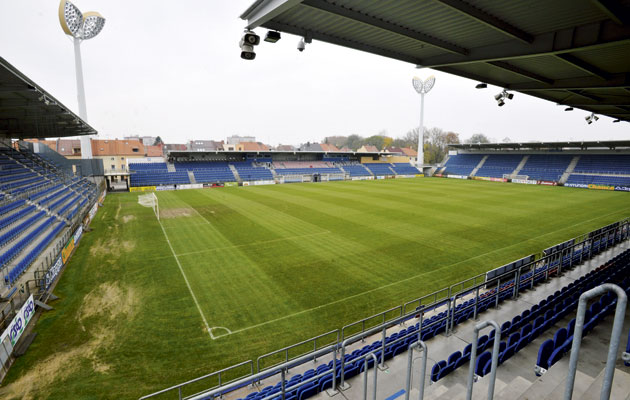 The remaining Group B games will be played at Slovacko’s 8,000-capacity Stadion Miroslava Valenty. The selection of this modern, compact stadium is testament to the south Moravian club’s rapid rise.
Based in Uherske Hradiste, a large but sleepy town at the heart of the Czech Republic’s main wine-growing region, Slovacko came into existence only in 2000, following the merger of SK Synot Stare Mesto and FC Synot Slovacka Slavia Uherske Hradiste, two local clubs owned by the Valenta family’s Synot gambling empire.

Initially known as 1.FC Synot, the merged club played in the neighbouring town of Stare Mesto until 2003, when a total reconstruction of the Uherske Hradiste stadium was completed. The future looked bright until the 2003-04 season, when the club was revealed to be at the centre of the Czech Republic’s biggest-ever match-fixing scandal. In the aftermath, the club was demoted to the second division, three of its officials were convicted of bribing referees and the Valenta family sold the club, which re-emerged as Slovacko, the name of the surrounding region.

Despite the scandal, Synot’s influence on Czech football remains strong. The stadium continues to bear the name of Miroslav Valenta, who died in 2008, and the company is also the titular sponsor of Slavia Prague’s stadium and of the Czech first division, known as the Synot liga.

Come June 17, the Czech Republic will put its best face forward, welcoming visitors to a tournament played in smart stadiums in picturesque cities in an increasingly affluent country. When the guests are gone, however, the slightly murkier business of Czech football will resume.