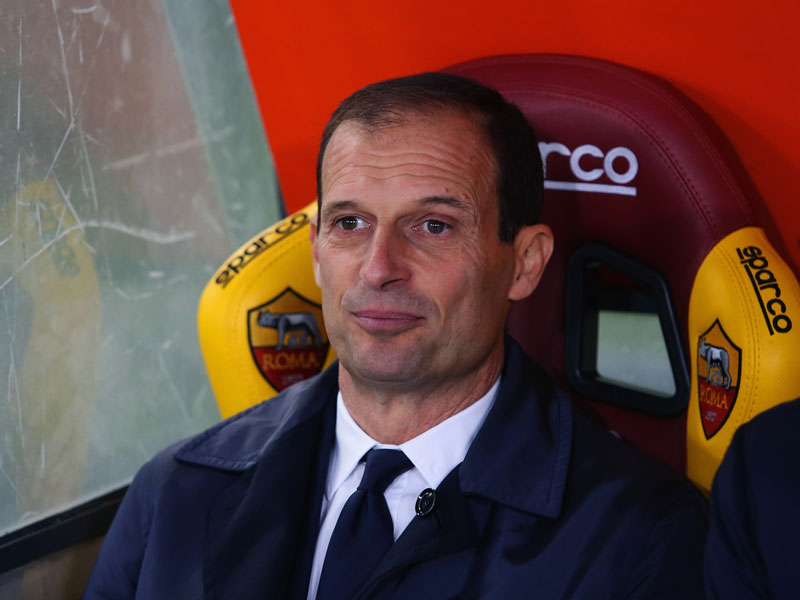 Sitting in the press room at the Olimpico in Rome on Sunday night, you could hear Massimiliano Allegri long before he entered the room. Full of energy and enthusiasm, the Juventus coach looked like a new man as he burst onto the stage for his post-match analysis of his side’s 2-0 loss to AS Roma.

The thing is, obviously, that for Allegri and his Italian champions, “school is out” and a cheerful end of term atmosphere reigns. That is what happens when you win the title at Easter, with five games still to play. Not for nothing, Juventus have picked up just two points from the three games they have played since wrapping up the title on April 27th. As we all know, at this level, motivation is everything and with the title wrapped up and no Champions League final to prepare, Juve have run out of motivation, a point admitted by Allegri himself on Sunday night when he said:

“We did well in the first half, except that we didn’t score. Given our dominance, we should have created many more chances. When you are clearly on top in a game, you’ve got to create the chances…But, we’ve already won the title and we had a bit of a lighthearted approach…”

Those saves came at a moment when the game was being played almost exclusively in and around the Roma penalty area. It seemed only a matter of time before Juventus would score.

Not so. Ranieri’s men hung on by their fingertips and got possibly more than their just rewards when first Alessandro Florenzi in the 80th minute and then Bosnian Edin Dzeko in time added on took full advantage of a Juventus defence that had already packed its bags in readiness for the train home.

So, where does this leave us all? Well, even if the game mattered nothing to Juventus, it did indeed matter a great deal to Roma who, thanks to this win, remain bang in there in contention for a Champions League place. As of now, with two games to play, Roma are sixth in Serie A on 62 points, just one behing fourth placed Inter and on the same points as fifth-placed AC Milan (in front of them on the head to head count).

Needless to say, over the last two days, these three will be involved in desperate battle for that much wanted fourth place, a battle that could become four way if Atalanta, currently on 65 points were to lose away to Juventus next Sunday night. Given Juve’s current underwhelming motivation, that could seem unlikely but, in the meantime, Atalanta play arguably their biggest game of the season when they face Lazio in the Italian Cup final, here in Rome on Wednesday night.

It remains to be seen just how much petrol Atalanta will have left in the tank after their eagerly awaited Cup Final appearance, their first since they lost 3-0 to Fiorentina 23 years ago. For eighth-placed Lazio, this Cup Final is arguably even more keenly anticipated than by Atalanta given that it would not only put some silverware on the sideboard but it would also go some way to compensating for yet again narrowly missing out on the Champions League at end of an overall very positive season.

Irrespective of how Atalanta and Lazio fare in their final, it has also to be said that wise old man Ranieri has done well with a disappointing Roma, keeping them in the Champions League hunt right down to the second last day. Speaking after Sunday night’s game, 67-year-old Ranieri confirmed that if, as expected, Roma opt for a new coach next season, he will not be hanging around looking for an “office job”, saying:

“When Roma offered me this job (in March as a caretaker replacement for Eusebio Di Francesco) they also offered me an (office) job for afterwards but I said no. I want to continue coaching, that’s the way I am…”

Ranieri then will be on his way, that we know. What we do not know is the name of his replacement given that one prize choice, former Italy and Juventus coach Antonio Conte, expected back in Italy, may be aiming higher, with either Inter or Juventus in his sights.

Yes, Juventus…After a five year spell at Juventus which has yielded five Serie A titles, four Italian Cups and two Champions League finals (defeats by Barcelona in 2015 and by Real Madrid in 2017), media speculation would have us believe that Allegri’s future as Juventus coach is no longer cast-iron certain.

That could be but Allegri and Juventus president Andrea Agnelli are due to meet sometime this week and it would come as no surprise to hear agreement between the parties has been reached. It could be that Allegri is looking for new players (a defender, a midfielder and a striker) as well as for a pay rise (speculation puts his salary request as high as €10-12 million). Such “requests” are enough to put any working relationship on hold. So, even if Allegri talks and sounds like the both current and future Juventus coach, we will have to wait and see.

Even if he shed no light on his own contract situation, however, Allegri did have one intriguing observation to make on Sunday night.   When asked by World Soccer how how he viewed the total English dominance of both this season’s Champions League and Europa League finals, he said:

“The English clubs have lots of (economic) possibilities but you should remember that the top five English clubs (Manchester City, Liverpool, Chelsea, Tottenham and Arsenal) are all coached by foreigners, namely Guardiola, Klopp, Sarri, Pochettino and Emery…With them, English football has improved tactically. With their ability to buy the best players and with their tactical improvement, it is frankly normal that the English clubs have achieved these results”.