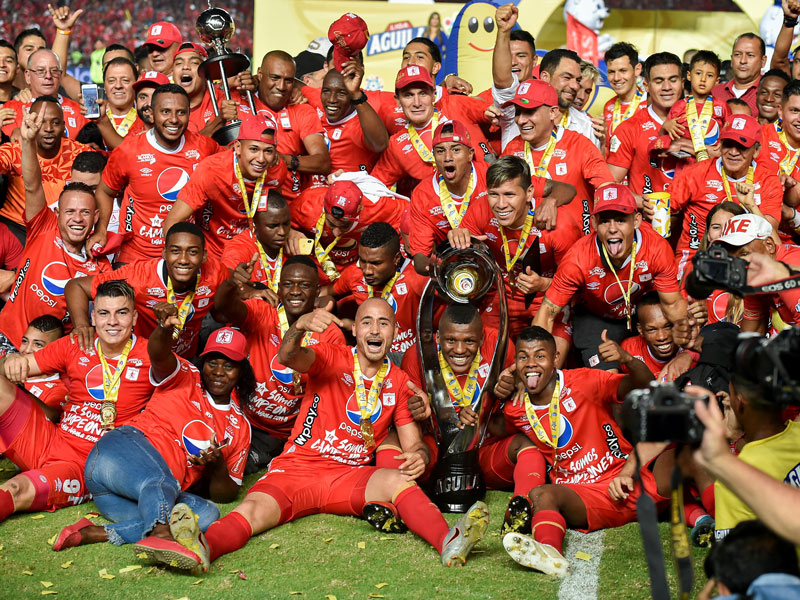 While Anthony Joshua was winning back his world heavyweight crown, a more complete comeback was concluding in Colombia.

America of Cali were beating Junior of Barranquilla 2-0 to win their 14th Colombian title and their first since 2008 – soon after which they fell down a hole so deep it threatened the very existence of the club.

One of Colombia’s most traditional teams, the red devils were the club who in the modern era, post-Alfredo Di Stefano at Millonarios, established the country as an international force.

They were not the first Colombian club to reach the final of the Copa Libertadores – an honour that belongs to local rivals Deportivo Cali, who did it in 1978. But in the middle of the following decade America reached three finals in a row – losing the lot but giving a clear demonstration that Colombia was a rising power.

Underpinning that rise, of course, was drug money. The cartels got involved with the game for a number of reasons. Many of the big hitters were fans, who enjoyed having a football club as a plaything. It was also good PR, and it offered the opportunity to launder huge sums. America went shopping, bringing in talent from all across the continent, setting themselves up as a kind of regional Real Madrid.

In the long run, though, the links with the Cali cartel were to have serious consequences. In the mid 90s, America were placed on the so-called Clinton List – a register of organisations and individuals which in the opinion of the US authorities were tainted by their links with narcotics or terrorism. This really began to bite a little over a decade ago, when the Colombian state co-operated with the US – with the result that America could have no contact with the financial system. Not even a bank account.

Unsurprisingly, the club slid into administrative and financial chaos.  They were relegated in 2011.

They could easily have gone under. There was no easy way back. A reorganisation of ownership helped them off the Clinton List in 2013, but it still took them until the end of 2016 to get back into the first division. And now, just three years later, they are champions again, and next year they will play in the Libertadores for the first time since 2009.

One of the heroes is the Brazilian-born Costa Rican coach Alexandre Guimaraes, working in South America for the first time in his long career. He has forged a team that, without being inspired, is solid and practical. Every signing – Brazilian keeper Neto Volpi, midfield general Rafael Carrascal, wingers Duvan Vergara and the Argentine Matias Pisano, striker Michael Rangel – has slotted in well.

Rangel has probably been the key man.  He is on loan from Junior, the winners of the previous two championships and the opponents in this final.  Rangel provided a target for the wingers, and gave a platform for midfielder Carlos Sierra to break into the box to good effect.

And with Rangel and Sierra providing the knock out blows, America of Cali, just like Anthony Joshua, outmoved and outpunched their rivals to bring the title back home.