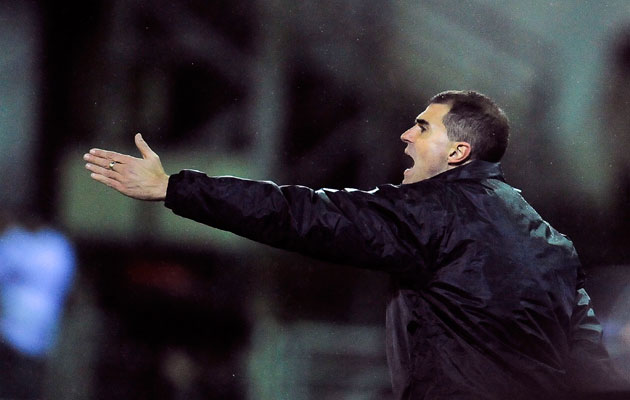 After two successive promotions, Eibar are now in the top flight for the first time in their history. With the smallest budget in the division, a stadium that holds only 5,000 in a town of just 27,000 and very few players with La Liga experience, this season must seem like a dream…
I think it’s logical, in so far as it is what we have worked towards. But I also think that we’re still not fully conscious of what we have achieved. One day, maybe we’ll be sitting on a beach on holiday and we’ll look back on it and it will hit us.

As a player with the club you only missed out on promotion to the Primera Division on the final day of the 2004-05 campaign. Do you think that makes you more aware than most of what this season means and how great an achievement it is?
I still have a thorn in my side, wedged deep in my side. It still hurts. It was virtually done. On the final day we were a first division team for about half an hour. But it didn’t happen in the end. At the time I think I remember that we even went out and celebrated the season because it was an enormous success, historic, our best-ever finish. But as the months went by I realised that we had lost out on a unique opportunity that would never come back and it hurt. I never really managed to pull that thorn from my side.

Do you enjoying coaching as much as you did playing?
It’s different. There’s more responsibility. I came straight into coaching, no break, and you miss playing, of course, but at that time I wouldn’t have wanted to play any more. I was tired of it; I didn’t have the desire any more.

Why was that?
Life passes you by and you see that you only have football; 24 hours a day with football, nothing else. And years go by. Pressure? Not really. I come from a footballing family: my father, various uncles, my mother’s uncle. I had always lived within that world and the pressure comes built in, even from a young age. I haven’t stopped, not really taken a breath yet. I think it was [Argentinian coach Marcelo] Bielsa who said “if you want to be the best in something, you pay with your happiness”. You have to forfeit other things. I enjoy the day-to-day work now, I am a football person, but of course you don’t get to do other things.

What other things would you like to do?
Spend more time with my daughters, read, head out to the mountains, do some sport. I’ll do them when I’ve stopped coaching.

You’re a fan of English football too…
I was there for Boxing Day. I went to watch Chelsea v West Ham in the morning and then Arsenal in the afternoon. I go at Christmas: grab my rucksack, my gloves, a scarf, and off I go.

Do you follow an English team?
I’ve always been a Liverpool fan.

And a favourite player?
I like [Jamie] Carragher: personality, leadership, tough. There are players like Gerrard, Souness, Dalglish who have more class, yes, but he was my kind of player.

You’d like to be a poet, too…
A bertsolari, yes. It’s a kind of traditional Basque street poet and I have always been fascinated by that, by everything about it. I have friends who are bertsolaris and I follow it closely. The bertso is improvised poetry, almost musical, respecting a rhythm and certain structural rules.

Are there any about Eibar?
There will be, yes. But you have to be very, very, very intelligent to be a bertsolari and I don’t have that. The use of language is incredible; they’re like the Messi or Ronaldo of street poetry.

Speaking of which, what Lionel Messi or Cristiano Ronaldo earn themselves in a year is more than Eibar’s entire budget…
It’s always been that way, but the gap is growing. Ronaldo earns what he is worth in the market, he generates that money so that his club can pay him. It’s supply and demand. It’s the way it is, but that is what we’re competing against.

You weren’t even the biggest team in the second tier. Or, in fact, the third-tier Segunda Division B…
We’re used to playing against teams that are better than us, having to fight to reach their level. The key is knowing that. I don’t think feeling inferior is something to be ashamed of, or even a problem. It makes you stronger. Don’t be scared, but do know that you’re competing against players who are better than you. Being inferior is not something to hide from; it’s good to know what you’re up against. The day that you play tu a tu – that you see yourself as equals – you’re lost. We can’t forget where we come from; the day we do, we’ll have a problem. We never play tu a tu. I admire teams that do, but I don’t like it. We don’t have the same power and potential as other teams. We play to win and playing tu a tu would make winning less likely, not more.

Curiously, your results are actually better away from home. Is that a reflection of what you’re saying?
Yes. We have more space away. Technical quality really tells in small spaces. When you have no space, you need quality. The bigger the pitch, the more you can impose other virtues: your physical condition, your speed. You don’t need to be so exquisite. Our pitch is quite small; not as small as people say, but quite small. I think it’s logical. It happened in the second division as well.

In terms of talent, can a player improve?
Talent? What is talent? Messi’s talent is innate but a 30-year-old can improve his left foot, perfectly. Or you can improve your physical condition Sure, innate talent like Messi’s: either you have or you don’t. But a footballer can get better technically, tactically, physically. You can’t set limits. You can work on that. Football is more and more personalised: every player has individual needs and we do that work one on one: there’s bespoke training. A player can say he wants to work on something – and the initiative is better if it comes from them – and you build a plan. It can’t be an imposition. Players come back in the afternoon to do extra work on top of what we do in the morning.

How do you identify weaknesses and areas to work on? Is that intuitive or based on hard data?
Football will never be entirely mathematical, but with every passing day it’s more information-driven. We know distances, intensity, the effort expended by every muscle, passes, everything. You can control the variables more than ever before, which means you can have a much more defined plan of action. Usually that information confirms what you thought but sometimes it does the opposite. There are some players who “con” you; sometimes you think something has happened in a game and the statistics show something else happened.

What’s a typical week’s work like?
On Monday, or the day after the game, we’ll work with those who have not played so that they have a heavy workload, despite not having played. Then the next day is a day off. Then we start strength training, in reduced spaces. On Thursdays, we’ll work on a full pitch; that’s the big session in the build-up to the game. On Friday, we’ll work on set-plays and dead-balls, and we’ll work through some of the ideas of the game: who we think are going to play, what we expect, the opponents’ weak points and so on.
Is that work the same as when you were in the Segunda Division B?
Yes. There are more of us now, there’s a bigger staff, but the approach is the same. The worst place you can watch a game is from the dugout but I have two people up in the stand passing me information, things I might not have seen, and we had that back then. We eat together every day at the club. We were very professional in the Segunda Division B and the identity remains the same.

Can you define that identity?
We want to be very competitive…very, very competitive. That’s why I admire Atletico Madrid. They run, suffer, never give up; they’re ready to play, whether it’s a good pitch or a muddy one, in front of 1,000 fans or 20,000 fans. I want my team to show solidarity, to be brave, not scared of anyone. I want us to be hungry, keen to improve. There’s 4-4-2 and 4-2-3-1, different styles, longer, shorter, but beyond that there’s character and ambition. Everyone has to share that. The team comes first, always.

And if a player doesn’t have that attitude?
If they don’t fit the ideas we have, they don’t come. We sign talented players but they have to run and work and give themselves to the team. If he doesn’t, we don’t want him. We’ve had players like that – not many, fortunately – and they haven’t been here for long.

What’s the last thing you tell your players before they go out to play?
As they go out, one by one, I whack them in the chest to get them going. Our results haven’t been good lately. I’ll have to hit them harder.