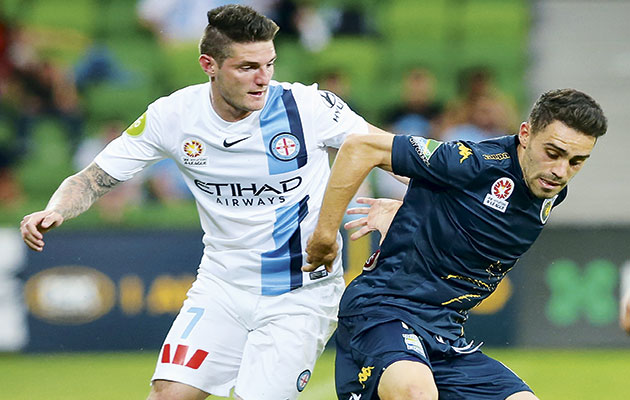 They transformed the fortunes of Manchester City and have begun what they hope will be a similar revolution in the USA with New York City, but what of the third cog in the wheel of the Sheikh Mansour-backed City Football Group?

The fortunes of Melbourne City – who were Melbourne Heart until a buyout two years ago – have followed a similar pattern to the parent club. A steady start, with much of the previous infrastructure left in place; the odd big-name signing (for Robinho, read David Villa, albeit briefly); and the construction of a remarkable new training facility – a smaller version of the Etihad Academy at the club’s base in Melbourne’s northern suburbs.

City reached the A-League finals for only the second time last year, while their youth team were crowned champions. This season, however, that pace of progress has quickened, with City just three points behind leaders Brisbane Roar after 15 games. Meanwhile, their women’s team won the Premiership without dropping a point. But it’s a low-profile transfer – in the global scheme of things – that could really shake up the Australian game and indicates that CFG are beginning to flex their financial muscle.

Anthony Caceres is a 23-year-old midfielder who has been developing nicely with Central Coast Mariners. Comfortable on the ball, with an eye for a pass and chipping in with the occasional spectacular goal, he’s had “potential” stamped all over him for some time.

In January, it was announced he was joining Manchester City. But as good as Caceres is, he’s not ready to replace Yaya Toure just yet. Instead, as many in Australia predicted, he’s joined Melbourne City on loan, with Manchester City having paid his $325,000 release clause to the Mariners.

But although the Premier League club are happy, Caceres gets a good move and the Mariners receive cash, there is one big problem: transfers for monetary reward aren’t allowed between clubs in the A-League. There are those who feel CFG have circumvented the regulations by using Manchester City as the third party in order to strengthen their Australian arm.

The move itself, it should be said, isn’t illegal, and CFG have even been applauded in some quarters for managing to be “creative” with the rules. But there are others who aren’t so happy.

Sydney FC CEO Tony Pignata tweeted on the day the loan was confirmed that “Caceres to [Melbourne] City is wrong. How can FFA allow this? There are no transfers between A-League clubs, yet it seems you can bypass.”

FFA, the Australian game’s governing body, admit there is a loophole and will conduct a review of the current procedures, probably at the end of the season.

If they decide to open up the domestic transfer market, then Melbourne City – with resources that far outstrip any other outfit in the competition – could probably buy any A-League player that they want; providing, of course, they can fit their wages into the stringent salary cap – which is another regulation causing headaches in its application. Alternatively, if the federation block inter-club moves, they risk shutting off big opportunities for young Australian players like Caceres.

City Football Group, as the A-League’s financial heavyweights, are setting the agenda. Although they have global connections, they must deal with some fairly parochial rules. Last year, Melbourne City were refused permission to bring in Frank Lampard on a minimum wage – Manchester City would pick up the rest – as his salary value was deemed unfair within the cap.

The conundrum for FFA is whether to allow City – and the likes of their crosstown rivals Victory, Sydney FC and Western Sydney Wanderers – to fulfil their “big-city club” potential, or whether to commit to the notion of equality, which doesn’t necessarily improve the level of play or, in an ultra-competitive market, commercial returns.

Either way, CFG are playing a smart game, and you wouldn’t bet against them coming out on top. But are inter-club transfers good for football? That’s a different argument entirely.