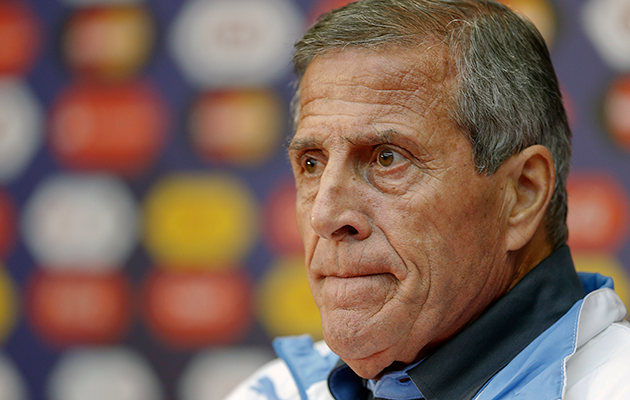 Uruguay coach Oscar Washington Tabarez seems none too impressed with the tournament in the USA that gets underway at the end of next week. “It’s a very different Copa America,” he said. “I wouldn’t dare to call it a Copa America – for me the Copa America is something else.”

This centenary version of the world’s oldest continental tournament pits the 10 South American nations in with 6 from the Concacaf region. “It’s being played all over the USA,” said Tabarez. “I don’t like this. The teams who reach the final will have had to travel across the entire nation. The USA is strikingly big, and with the heat that is likely in June and the distances involved, this increases the level of demand being made on the players.”

Part of his complaint is surely rooted in the frankly bizarre itinerary his team have been handed. Uruguay open up their campaign against Mexico in Pasadena, on the West Coast. They cross the country to face Venezuela in Philadelphia for their next game, and then go all the way back west to Santa Clara to take on Jamaica. They clock up more miles than anyone else in the group phase – and if, as seems entirely possible, they finish the group in second place, then will move coast to coast once more for a quarter final in Boston.

All of this begs an obvious question; why has Tabarez decided to take his first choice squad to the tournament?

Uruguay have no need to regroup or rethink. A third of the way through the Russia 2018 World Cup qualifiers, things could hardly be better. The team have never been at full strength; the main absences have been Luis Suarez, still suspended for the first four rounds, and Diego Godin, out injured for the subsequent two. These are the two most important players in the team – the attacking wizard and the defensive stalwart. They have not been on the field together – even so, Uruguay top the qualification table. Tabarez can hardly have imagined such an encouraging start.

But he knows from experience that the qualification campaign is long and difficult. There could be wobbles ahead. And with that in mind, there are two reasons to be surprised by the coach’s squad for the Copa America.

One is that the current squad have been racking up consecutive summer tournaments. Of the 23 names announced last week by Tabarez, 17 went to last year’s Copa America in Chile, 16 were at Brazil 2014 and 13 went to the previous year’s Confederations Cup. A total of 6 were also present at the London Olympics, 13 played the 2011 Copa in Argentina and 11 went to South Africa 2010. Is there really anything more that Tabarez needs to learn about grizzled veterans such as Maxi Pereira, Alvaro Pereira or Egidio Arevalo Rios?

More to the point, these are players who will need to be replaced before long. In addition to the risk of burning out some of the old guard by taking them to the USA, Tabarez is depriving himself of the opportunity to test out some of their potential replacements in competitive conditions.

Perhaps the coach has been scarred by memories of London 2012 – seen as a half way house to the senior side for the promising graduates of Uruguay’s Under-20 teams. Despite the heavyweight re-enforcement of Suarez, Edinson Cavani and Arevalo Rios, the youngsters floundered and the team was knocked out in the group phase. Tabarez may have come to the conclusion that it is preferable to introduce new players gently.

His priorities remain intact. “The most important thing, as far as I’m concerned, is what is going to happen starting from September” – six more rounds of World Cup qualifiers, the second third of the campaign, take place between September and November. 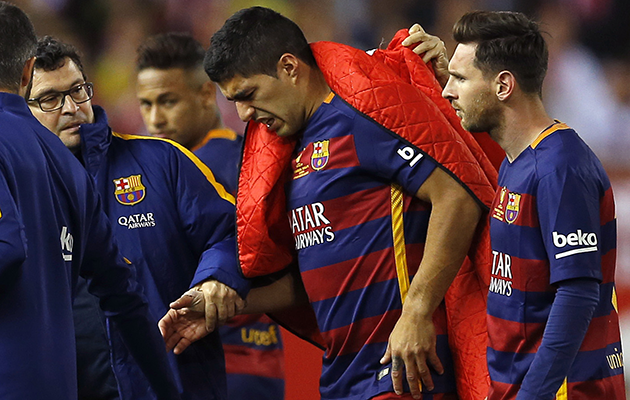 Luis Suarez helped off the pitch after injuring his hamstring in the Spanish Cup final.

For this reason, he will surely react calmly to the injury suffered by Luis Suarez while playing for Barcelona in the Spanish cup final against Sevilla. Uruguay’s all time top scorer limped off the field after pulling up with a muscle injury which may cause him to miss out on the Copa. Suarez has had a heavy workload for his club this season – Tabarez will want him to be firing on all cylinders when World Cup qualification resumes, and so an enforced rest may be no bad thing.