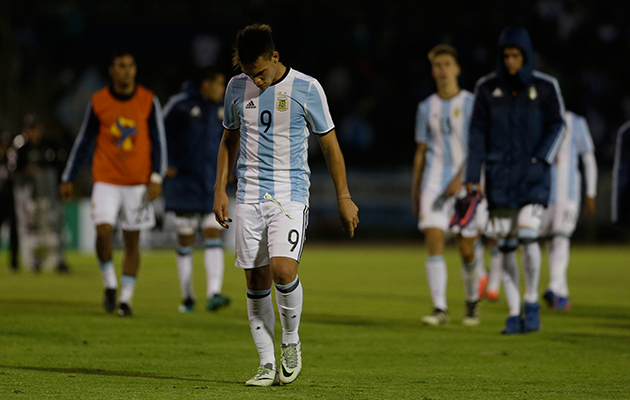 There is plenty at stake on Wednesday night when Argentina meet Brazil in the penultimate round of South America’s Under-20 Championships.

But the traditional giants are not, as one might suspect, disputing the title.  Instead of battling for glory, they are facing failure.  Four teams qualify for the World Under-20 Cup, to be held this May in South Korea.  Three games of the final phase have been played.  Two remain.  Brazil lie fourth.  Argentina are fifth.  The loser on Wednesday night will be in real trouble.  A draw, too, is unlikely to resolve matters.  In Saturday’s final round Brazil play Colombia while Argentina face Venezuela.  Both games could turn out to be a straight fight for a place in South Korea.

And things could be even worse for Brazil and Argentina.  Each have managed one win in the previous three rounds.  Both times it came with a whiff of controversy.

Either side of 3-0 defeats Argentina beat Colombia 2-1.  The game was level at 1-1 with the Colombians well on top when the referee awarded a very harsh straight red card to their midfielder Eduardo Atuesta.  Against ten men Argentina were invigorated and snatched a stoppage time winner.

And on Sunday, in perhaps their worst performance of the tournament so far, Brazil scored a late goal to inflict Venezuela’s first defeat.  But there was a clear foul committed by centre forward Felipe Vizeu before he lashed the ball home.  Without a little piece of luck, then, the continent’s traditional big two might be really struggling. 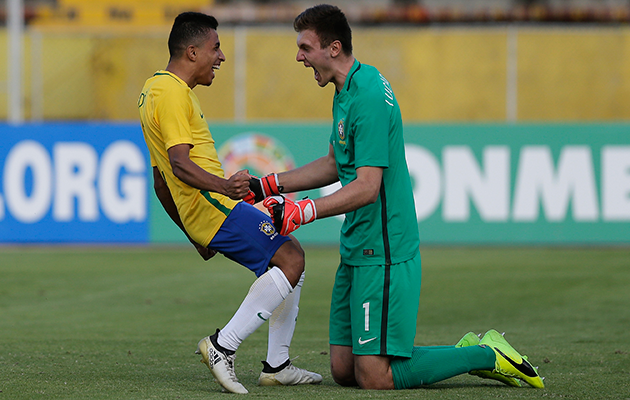 How much does this really matter?  After all, the point of youth football is to develop players rather than win titles.  For a start, failure to qualify for the World Under-20 Cup would deprive a group of players of valuable international tournament experience.  But it goes further – as the example of Uruguay makes clear.

After three consecutive wins, Uruguay have already booked their place in South Korea.  More to the point, their 2017 Under-20 side looks set to consider the recent tradition of producing players for the senior side.

The Under-20 level is potentially an important conveyor belt to the full strength squad – especially in the contemporary reality of South American club football, when players move abroad at an ever earlier age.  The Uruguayans have clearly got their project right – identifying promising youngsters, acquainting them with the history and identity of the sky blue shirt, giving them World Under-20 Cup experience and then funnelling them through.  The fact that Uruguay are once again punching well above their weight at senior level is in no small part due to the work carried out at Under-20 level.

Argentina used to have something similar.  Between 1995 and 2007, with a project established by Jose Pekerman, they won the World Under-20 Cup on five occasions and produced no end of players for the senior side.  Amid the chaos of the domestic Argentine game, all that was let go – and the long term consequences have been made clear by the struggle the team faces to make it through to Russia 2018.  When Argentina won Olympic gold in Beijing in 2008, coach Sergio Batista warned that the quality of the youth sides was in decline.  Time has proved him right.  One or two players might have promising careers, but there is little that is impressive about the current Under-20 line up.

For Brazil this is their third disappointing display in a row in the South American Under-20s.  Indeed, in 2013 they – and Argentina – both failed to reach the second, decisive round, let alone that year’s World Under-20 Cup.

Their current side look stronger than Argentina.  But their model of play reflects a confusion in the contemporary Brazilian game.  The defensive midfielders want to pass the ball with patience.  But the wide midfielders and the central playmaker seem transfixed by the obsession to be direct, to always go for the dribble or the killer pass.  So there is little fluidity to the team’s attack.  They are like a boxer forever wanting to land the knockout punch, but who has not jabbed and moved enough to open up the opportunity.

Perhaps the two teams will suddenly rise to the occasion on Wednesday.  But whatever happens, it will be required viewing.  Even if the game turns into a parade of mediocrity, it will still be Brazil versus Argentina.