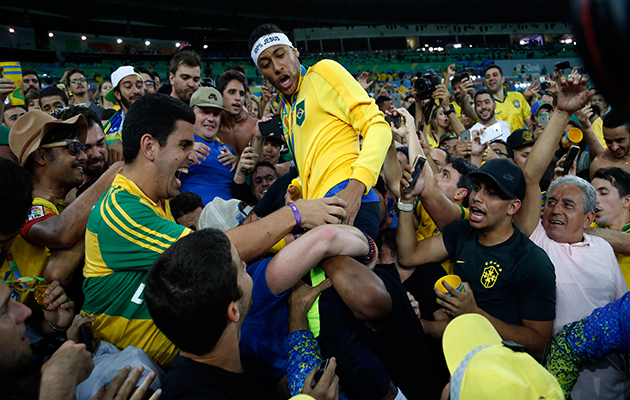 Apart from a much needed ego boost, what do Brazil get from finally winning the Olympic gold medal?

‘The champion is back,’ roared a huge crowd in a deafening Maracana stadium.  In the cold and wet of the following morning, it seemed something of an exaggerated reaction to a penalty shoot out victory against, as the ever-wise Tostao pointed out, “a Germany who did not bring a single player from their Euros squad and who are without several of their best Under-23 players.”

Some have called for Brazil’s young front line to be promoted immediately to the senior team.  Writing before the final, Tostao argued that the emergence of Luan, Gabriel Barbosa and Gabriel Jesus “showed that Brazil still produce a lot of talented players.  Will this crop soon prove themselves as good, better or worse than the likes of Douglas Costa, Phillippe Coutinho and Willian, who are doing well with big clubs and are always called up to the senior squad?”

The answer supplied by Saturday’s match against the Germans was that the new breed still have a long way to go.  Essentially, the story of the final was of their failure.  The Germans probably had more clear cut chances, even though Brazil controlled most of the game.  This is largely because so many promising situations for Brazil did not lead to shots on goal.  The Germans defended well, but Brazil’s young strikers made it easier for them.  Time and time again the German defence appeared to have been split, only for the Brazilians to waste the chance by taking too long, dragging the ball onto their good foot and trying to line up the strike as if it was a putt on the golf course.  The Germans had time to get men behind the ball and make the block or the tackle.

Rather than any individual promise from their young players, the main progress made by Brazil in this competition was collective.  Their first two games were truly appalling – and then came the vital switch.  4-3-3 was abandoned.  It left acres of space between the lines of the team.  There was no fluidity, no passing moves.  Midfielder Felipe Anderson was dropped, and in came Luan, an extra striker.  Gabriel Barbosa stayed wide right.  Gabriel Jesus moved from centre forward to wide left.  Neymar moved infield, into a position where he was in constant contact with the ball, and Luan slotted in alongside him, making a pair of false 9s.

Now there was a link up between midfield and attack.  Either Neymar or Luan dropped to combine.  Sometimes both dropped, leaving space for the Gabriels to cut into the penalty area on the diagonal, which in turn left space for the full backs to overlap.  Midfielder Renato Augusto dropped a little deeper, filling a role where he did not have so much ground to cover.  He was the team’s organiser and Neymar’s main supply line.  And alongside him Walace did the dirty work, covering and marking.  Brazil played four front players but still managed to remain sufficiently compact to retain a balance between attack and defence – helped by the pace of centre back Marquinhos.

It is worth remembering that towards the end of 2012, shortly after disappointment in the final of the London Olympics, then-coach Mano Menezes hit on something similar – a system without an out-and-out centre forward that looked something like a 4-2-4-0.  At the very moment it seemed to be bearing fruits Menezes was sacked and in came Luiz Felipe Scolari.  The very first change that he made was the return of the target man centre forward.

Four years on, then, it could be that Brazil are prepared to return to an experiment which was so frustratingly interrupted.  And that is not the only thing that is going to change.  As well as winning a title, Brazil have also lost a captain – Neymar said after the Germany game that he no longer wants the job.