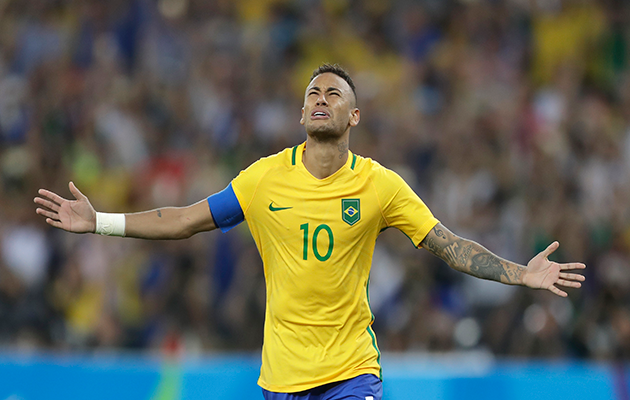 Brazil’s Olympic Games reached a triumphant climax – at least for their fans – when captain Neymar rapped home their decisive fifth kick in a penalty shootout after a high-tension gold medal final against the old foes from Germany in Maracana.

The final almost everyone had wanted – no-one more than Brazil with so much riding on the outcome, in terms of national pride and expectation – ended 1-1 after extra time. They had come up teasingly short on ideas over the 120 minutes against a cool, calm, well-organised German side.

But then it came to penalties – where Brazil’s women had stumbled and fallen in their semi-final. Not so the men. All eight kicks were put away decisively. Then keeper Weverton saved from Nils Petersen . . . and it was left to Neymar to seal redemption.

Brazil’s captain had been the man who provided their 27th-minute breakthrough, clipping a curling 25m free kick over the wall and against the underside of Timo Horn’s crossbar and down behind the line. The explosion of joy in Maracana might have been heard in the 2020 Olympic host city of Tokyo.

But early in the second half the Brazilian defence fell invitingly open and German captain Max Meyer swept home an equaliser which sent a frisson of fear trembling through the crowd.

Hosts’ coach Rogerio Micale had lined up the same team familiar with Maracana from the six-goal despatch of Honduras in the semi-finals including their ‘secret weapon’ in right-side midfielder Renato Augusto who plays his football in Germany with Bayer Leverkusen.

Germany coach Horst Hrubesch also kept faith with his semi-final winners, lining up the same starters from the 2-0 victory over Nigeria. Hence he played, in Matthias Ginter, the one member of the German squad who celebrated the historic 7-1 demolition of Brazil in Belo Horizonte at the 2014 World Cup.

Either way, a new Olympic champion would be rewarded with gold. The nearest Brazil had come was silver on three previous occasions, most recently in London against Mexico in 2014. West Germany, with Jurgen Klinsmann, had won bronze in Seoul in 1988 though the former East Germany were Olympic champions in 1976 in Montreal.

Both teams started at pace in a packed stadium and the Germans nearly claimed first blood in the 11th minute when rival Leverkusen midfielder Julian Brandt cracked a 20m drive from just beyond the corner of the penalty box against Weverton’s crossbar.

A period of scrappy play followed with both sides pressing the pattern out of the game. Luan had a shot blocked by a headed clearance and then Renato Augusto side-footed wide from a right-wing corner before Neymar snapped Brazil ahead.

Germany came right back at them. A free kick on the left was cleared by Brazil over their own goal before Brandt provided a perfect right-wing free kick which Sven Bender headed against the top of the bar.

While their goal led something of a charmed life, Brazil had more poise in midfield where Renato Augusto controlled the pace and direction of attack while the tyros around him imposed their own former of ‘Brazilian pressing’ to prevent the Germans developing their own favourite passing game.

Brazil were content to go in at the interval with the advantage which they maintained comfortably in a low-key start to the second half. But that proved dangerous for the hosts who allowed themselves to be lulled into false sense of security.

Germany finally put a neat inter-passing move together on the right and Max Meyer was unmarked in the penalty box to sweep his shot on the turn beyond Weverton’s right hand.

Now that time and fatigue were taking the snap out of Brazil so Germany were better able to develop their passing game. Neymar thus woke up to the challenge. First he put Felipe Anderson in but the substitute was too slow to capitalise then the Barcelona star delivered a curling effort of his own which flew wide of Horn’s right-hand post.

Now, suddenly, the entire Brazilian attack came to life again and it was the Germans’ turn to race and chase back in defence. Fortunately for them, Brazil were better at opening up space around the penalty box than capitalising on it.

Hence, with more scares than clear opportunities, the game ran into extra time.

Brandt was just over the bar after a German counter-attack in the first half of the extra period and then Horn made a fine save from the breaking Felipe Anderson at the start of the second period.

Hence the final went to penalties for only the second time since Cameroon beat Spain 5-3 after a 2-2 draw in the gold medal final in Sydney in 2000.