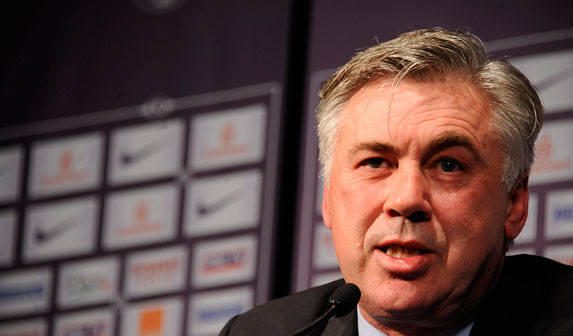 World Soccer: What was it that convinced you to take the coaching job at Paris Saint-Germain?

Carlo Ancelotti: Why? (Laughs) Because I thought it was interesting – the project of this club, the ambition of this club. I am interested because we want to be something special here, because this club is very young. It was born in 1970 and they have won just two championships and some cups, but we want to be in the Champions League next year and to do out best in that competition.

WS: You have been at Milan, a club with a long history who have won seven European Cups, and Chelsea, a club that have had a lot of recent success. How would you compare PSG to your two previous jobs?

This club does not have a big history like Milan, like Manchester United, like Real Madrid, like Barcelona. But the aim is to reach that kind of level. And, of course, we need to work hard, we need to take time. Presence in the Champions League next season will be good to create a new structure and a new philosophy at the club – and a new experience for a lot of the players. For that reason, there is a lot of enthusiasm around this club. The club is young, the people that are working here are young and the owner is young.

WS: What were your first impressions of the club’s owner, Nasser Al Khelaifi, when you met him?

It’s very simple; his objective is very clear. He wants to build a good image of this club, to build one of the top clubs in Europe, and he wants my experience and my knowledge to help the club and the team to improve quickly. He has a fantastic passion for football. He knows everything about football.

WS: Would it be a big failure if PSG don’t win Ligue 1 this season?

No, it will not be a problem for the club. Obviously, when I joined, the club were at the top of the league so I have to try to do the best I can to keep them there until the end of the season. But the aim is to play in the Champions League, so there is not a problem if we are not able to win the league.

WS: What would be the extent of your expectations if you are in the Champions League next season?

To be competitive in the Champions League means to move on from the group phase, so we want to be competitive next year. I think that next season, with two or three more players we can be competitive in the Champions League. This club has changed a lot so there was not a clear
way to follow. It is a new club because the team was rebuilt in the summer. The club bought 12 players very quickly and the club is improving day by day. We changed something when I arrived here, we put more technology in the training ground, and day by day we want to improve. In January we bought fantastic players like Maxwell, Alex and Thiago Motta, who have a lot of experience. I think in the summer the market will be more open and we will have more possibilities.

WS: What kind of players will you be looking for in the summer?

All positions on the pitch. We need to have a defender, a midfielder, a striker. Of course, we have a possibility to invest money, but we have to invest the right money in the right area and on the right player. We are paying attention to the salary, of course, because maybe some think they can come here and earn what they want, but that is not true.

WS: How close did PSG come to getting David Beckham and Carlos Tevez in the winter transfer window?

The club tried to find an agreement with Beckham, but I was not here at the time and not involved in this. I think they were very close, but in the end Beckham decided to stay in Los Angeles and play for LA Galaxy. Tevez was a different matter. His first choice was Milan, but he had a problem with them. His second choice was us, but we could not reach a financial agreement with him, which is why we couldn’t buy him.

WS: What do you think of French football at the moment? How do you think Ligue 1 compares with the other top leagues in Europe?

It’s different football compared to the Premier League in England; the tactical system here is more Italian. You have to play against teams that have a good defensive knowledge, so it’s not easy. In England matches can finish 7-0 or 6-2. Here, like in Italy, that is impossible.

WS: You coached Leonardo for one season at Milan and now, as PSG’s director of football, he’s your boss. How does that relationship work?

I have a very good relationship with Leonardo. I think part of the reason I am here is because he knows me very well and he knows what kind of job I can do. When we met for the first time, we were agreed on everything.