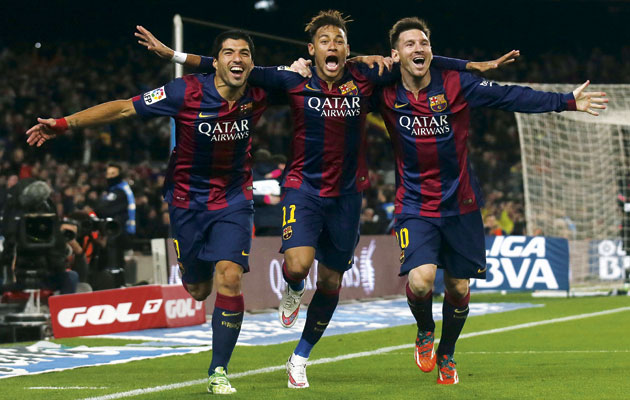 It’s two years since Barcelona were hammered 7-0 on aggregate by Bayern Munich in the Champions League semi-final, a defeat that for many called into question the future of tiki-taka. It’s four months since Lionel Messi was left out of a defeat to Real Sociedad and missed training with a gastric problem that was interpreted as an expression of his discontent with coach Luis Enrique. With rumblings over the probity of the Neymar deal, a transfer ban and questions about how ethical some of Barcelona’s commercial links were, they were a hair’s breadth from being a club in crisis. Now they are in the Champions League Final.

The background issues haven’t gone away – the transfer ban stands and Barca’s president Josep Maria Bartomeu and former president Sandro Rosell will face tax evasion charges over the Neymar issue – but on the pitch everything has clicked.

The front three of Lionel Messi, Neymar and Luis Suarez had the potential for greatness, even if many feared they wouldn’t dovetail, and now it is delivering. Winning quickly transforms off-field problems into minor irritations.

The dynamic of the team has changed considerably from the 2013 semi-final, even though only three outfielders have been replaced. Out have gone Xavi, Alexis Sanchez and Pedro, and in have come Ivan Rakitic, Neymar and Suarez.

Xavi was a superb footballer and perhaps more than anybody embodied the philosophy of the Guardiola-era Barcelona, spinning his webs of passes, turning the 10-yard, space-creating sideways ball into an art form. But as age crept up on him – he is now 35 – a little of the intensity left him and for a couple of seasons he hasn’t pressed with quite the same zeal he once had.

Xavi has accepted his relegation to the bench with good grace – rather better grace than now coach Enrique accepted the end of his time as first-team regular and emblem of the club under Frank Rijkaard
– and the introduction of Rakitic has changed Barca’s midfield.

Rakitic is quicker, taller, more aggressive and, crucially, far more likely to attempt a direct forward pass even if it increases the chances of possession being lost. His assist for Messi’s second goal in the first leg of the semi-final was typical – a rapid, vertical pass from halfway to just outside the box. There were four Bayern players who got within four or five feet of the ball, but the risk was justified by the fact that it presented Messi with the ball in enough space that he had already begun to accelerate when he came up against the backpedalling Jerome Boateng. 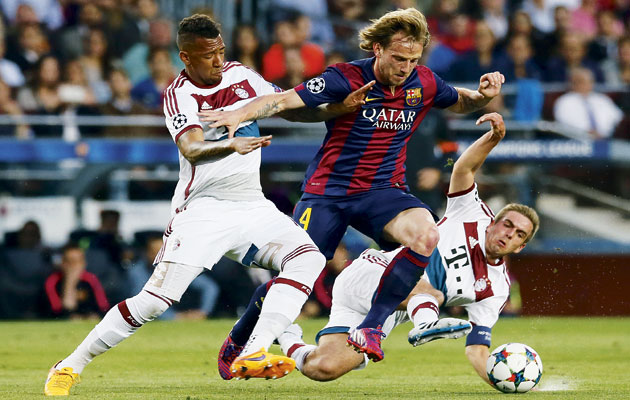 But Rakitic’s verticality isn’t the only change in style; the stellar nature of the front three is the major alteration. It would be untrue to say Barca are a broken team in the way the term was understood in, say, Italy in the 1990s, but there is far more of a sense now of them looking to get the ball to the front three and letting them get on with it.

That was presumably one of the reasons Johan Cruyff was so sceptical of Neymar’s signing. He doubted a player who was being paid as much as he was at such an early age would confirm to the tactical demands Barca have traditionally placed on their forwards. To an extent, he was right: Neymar does not work the flank as Pedro or Sanchez did.

But between them, Barca’s front three win the ball back – through tackles and interceptions – an average of 3.2 times per game; in Guardiola’s last season, the front three won it back 5.0 per game. Barca don’t press as hard or as high as they used to.

What they do far more often than they used to is to run with the ball. In the first leg of the semi-final, Barca attempted 44 dribbles and completed 26; to put that in context, in the first leg of the Juventus v Real Madrid semi-final there were only 15 completed dribbles in total. Where Barca once passed teams to death wearing them down with the attrition of having constantly to chase possession, there are now three individuals all capable of doing something extraordinary that will produce a goal.

Dribbling is risky, of course. In the first leg of that semi-final, Barcelona lost the ball 18 times while dribbling – the sort of profligacy they could never have countenanced under Guardiola. But this is the new Barcelona. They may not be avatars of a possession-based philosophy as Guardiola’s side was – although he bridles still at the term “tiki-taka” and insists that possession must always have a purpose – but that gives them a wildness, a sense of unpredictability.

Whether that is considered a step forwards or backwards probably depends on individual temperament, but what is certainly true is that the team looks rejuvenated. In that final season under Guardiola and under both Tito Vilanova and Gerardo Martino, Barca have looked jaded, physically and mentally incapable of the intensity of pressing that was such a key feature under Guardiola. This season, they’ve found a way of playing without needing to press in the same way, and the major overhaul of personnel that had seemed necessary is suddenly less of a priority.

Perhaps the arrival of Neymar and Suarez has cost Barca some of their identity, and has changed the style away from what Cruyff and Guardiola would see as the classical Barca model. But so long as it is working, few at the Camp Nou will care.

There is an edge to Barcelona now, a hardness that was perhaps lacking, and a versatility that makes it so much harder for teams to set up to stop them. It may be that moving away from the pure Barca model – hugely successful as that was – has made them more effective.