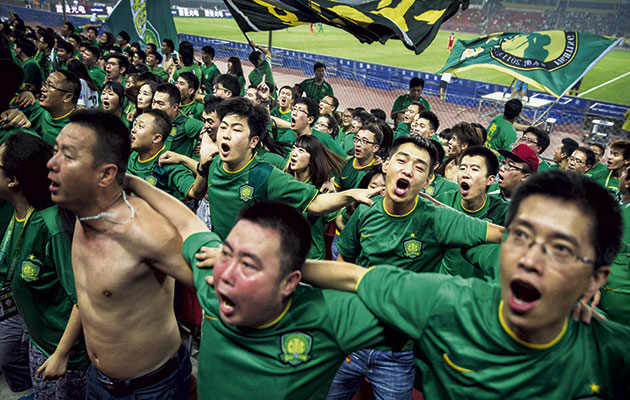 In 2012, Nicolas Anelka and Didier Drogba signed for Shanghai Shenhua amid great fanfare in China and everywhere else. Yet majority owner Zhu Jun had an online game to promote, and a power battle with other shareholders to engage in, and he struggled to pay the stars who swiftly returned west. For some it was proof that the Middle Kingdom was not yet a place for the big stars.

This time, it is different. That’s not to say that there will not be individual issues in the much larger and more recent influx – Gervinho and Ezequiel Lavezzi may find that the far northeastern city of Qinhuangdao is much tougher to settle in compared with the cosmopolitan and modern metropolis that is Shanghai – but this is a more sustained and sustainable wave of spending by Chinese Super League clubs.

It is also no standing start. Even a decade ago the league was nowhere near as bad as has been made out, and in recent years it has improved. With an average attendance of over 22,000 in 2015, it was already one of the most watched in the world and only just behind France and Italy. Those countries will surely be overtaken in the coming season.

The facilities are often fantastic, the stadiums large and modern, and the passion for the game palpable. Football is already the most popular sport, though basketball – buoyed by the success of Yao Ming, a Shenhua fan – has run it close in recent years.

But that is mainly because the country has been starved of success by its true love. If the world’s most populous nation could actually be a global football force… well, nobody knows what would happen, but the spending is part of a wider push to provide that opportunity.

The amounts paid for some players make Premier League clubs look restrained. But when you are an emerging league far from the traditional centres of football power, you have to pay over the odds to attract talent.

It remains to be seen whether Jiangsu Suning paying Chelsea £25million for Ramires and over £35m
to outbid Liverpool for Alex Teixiera, and Guangzhou Evergrande – winner of the last five league titles – spending £32m on Jackson Martinez from Atletico Madrid (a Chinese team buying a player from a part-Chinese owned team) is good business.

And then there are Shanghai Shenhua landing Fredy Guarin from Internazionale and chasing Wesley Sneijder; Shanghai SIPG with £35m-plus strike force in Asamoah Gyan and Elkeson; and even newly promoted teams like Hebei raiding European giants such as Roma and Paris Saint-Germain. The likelihood is that some stars will shine and others will not, especially as the likes of Jiangsu have taken a scatter-gun approach to transfers.

The spending is not likely to slow down and the fire had already spread to the domestic transfer market. In January, second-tier Tianjin paid around £7m to Jiangsu for Sun Ke, a 26-year-old winger. Not only is China paying more than other countries for overseas talent – only the English Premier League outbid even the Middle Kingdom’s second tier in the winter transfer window – their clubs are paying more for domestic players. This is partly because with each squad allowed to have only five foreign players (of which four can play at any one time), having the best Chinese talent, as Guangzhou have had over the years, is also crucial.

The money comes from various sources: private, public, provincial and national. Many clubs in the Chinese Super League are backed by companies that made their money in the property market, such as Evergrande and Greenland, who own Shanghai Shenhua. With the real estate boom a thing of the past, most companies are now big enough and diverse enough not to be seriously affected by downturns. Suning took over Jiangsu late in 2015 and the retail group, with over 1,000 stores across the country, has been hugely active. Hebei is owned by an industrial park construction company.

Investment off the pitch at home is growing. Television rights for the 2015 Chinese Super League season went for just over £1m. In 2016, that will be around £170m as part of a new five-year deal worth in the region of £850m, amounts unheard of in all of Asia and most of the world. More and more wealth will slide down the ladder. It also gives the league a lustre in the eyes of the brand-conscious youth who had turned to other sports, leagues or pastimes. It gives a greater profile (the domestic media has had a great time repeating every vague Chinese-related transfer rumour to appear in the UK press) and will help to forge a genuine football culture that has been lacking in the past.

Why the private sector has become involved is partly explained by the fact that president Xi Jinping made it clear even before he took the top job in 2013 that more failure on the world stage (the nation has appeared in one World Cup and all three games in 2002 were lost) was not an option. With the government starting to get behind Chinese football, it can be expedient for the private sector to do their bit too. It is not just that. The transfer market has taken on a life of its own with clubs competing to outdo each other and all striving to catch Guangzhou Evergrande and stop the Cantonese club making it six successive domestic titles.

Guangzhou were the first Super League club to spend heavily. Even before January, it had spent more than £100m in five years on coaches, first Marcello Lippi and now Luiz Felipe Scolari, and players such as Robinho, Paulinho and Ricardo Goulart. As well as securing domestic dominance, the signings also fired the team to a second Asian Champions League in three years. Rivals such as Shanghai SIPG brought in Sven Goran Eriksson to oversee their challenge while Shandong Luneng, Beijing Guoan, Shenhua, and now Jiangsu and Hebei are all trying to emulate Gunagzhou. But Chinese and Asian glory is no longer enough for Guangzhou, who now want to win the Club World Cup and become a global power. Whether it is possible remains to be seen, but the effects of the investment have already been clear in continental terms. Until Guangzhou, a Chinese team had not won the Asian title since 1990. With a bit more luck, the two Champions Leagues in the last three years could have been four from four. After years of Japanese and especially South Korean domination, Guangzhou are Asia’s premier club.

These improvements come directly from transfer spending and the accumulation of much of the national team. For Chinese football to improve across the board the standard of the domestic players has to rise. This is more difficult. It has been argued the arrival of talented foreigners helps the locals and there have been signs of this. Better coaches make a difference too, hence the signing of experienced men like Scolari and Lippi. The likes of Eriksson, ex-Brazilian boss Mano Menezes, Alberto Zaccheroni and Dragan Stojkovic are an improvement on many of the domestic tacticians especially given the traditional lack of coaching education.

Better coaching of coaches is being addressed along with many other things. The Ministry of Education has been working for the past three years on rolling out a programme that will see 20,000 schools teach kids football at least once a week by next year. There are plans to expand that and reverse the countrywide trend that does not see youngsters playing the game. Throw in private academies like the one built by Guangzhou Evergrande and Real Madrid, reportedly the biggest in the world, and the hope is that the increase in money, brand and profile of Chinese football will encourage more kids to aim for professional careers, the lack of which in the past has been a major problem for the country.

Continuing to attract top foreign talent is also important. Whether the very best players in the world will choose China may depend on what happens to the growing number of Brazilian stars now in the country. At the moment, given the geographic practicalities and China’s reputation, Brazilians put their national team place in doubt if they make the move but as more go, there could be a point when that changes.

If other stars see that China does not damage national team chances while offering big money, a vibrant league and a fascinating experience then genuine A-listers could be on their way. And that really could be a game changer.