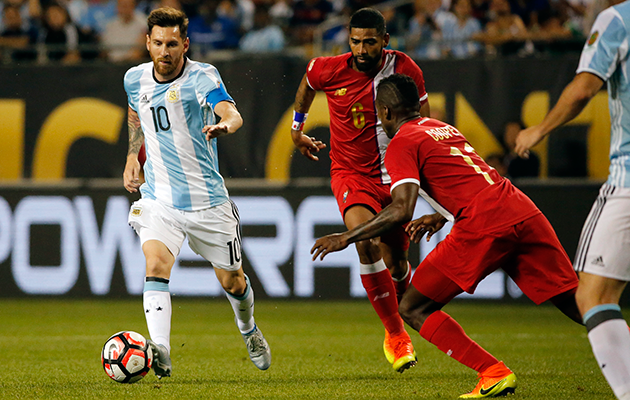 Seven of the Copa Centenario quarter finalists have been sorted out.  Just one place remains – and it is at stake in a match on Tuesday that has become important to the soul of the current competition.

This enlarged version of the Copa America has room for 6 nations from the Concacaf region, rather than the two who have taken part since the mid 90s.  For these newcomers, then, this is an important occasion, a chance to test themselves against more traditional rivals from the south.

The warm up games looked good for the Concacaf sides.  All 14 of the pre-tournament practise matches played by the South American teams were against Concacaf opposition, with the final score standing at 6 wins each.  But once the competitive action started, it was a different story.

True, USA and Mexico have made it through to the last eight.  But that was only to be expected – and the USA had to do it the hard way after an opening day 2-0 defeat to Colombia.  Elsewhere, 2014 World Cup sensations Costa Rica proved a big disappointment.  They crashed out of the competition when a defence that had looked so solid collapsed in the most naïve manner to a 4-0 hammering by the US.  The Costa Ricans 3-2 win against an understrength Colombian side was scant consolation.

Jamaica played last year in Chile, losing all three games by a single goal.  With a meaningless game still to go they have done worse this time, and still have yet to score after losing 1-0 and 2-0 to Venezuela and Mexico respectively.  Haiti have been softened up embarrassingly as the tournament has progressed.  They came very close to a last gasp equaliser against Peru, but then lost 7-1 to Brazil and 4-0 to Ecuador.

Which leaves Panama.  With an experienced group of players and a vastly experienced coach in the Colombian Hernan Dario Gomez, there was a suspicion that Panama’s band of nearly man might rise to this occasion.  And indeed they beat Bolivia 2-1.  The next result, a 5-0 defeat to Argentina, looks like a rout.  It was not.  Despite going down to a slack early goal, Panama struck back hard, and it would not have been an injustice had they scored an equaliser.  Despite having a man sent off after 30 minutes they kept it competitive against Argentina – until the second half entry of Lionel Messi changed everything.  But now Messi is someone else’s problem – and Panama are Chile’s.

The two sides meet in Philadelphia on Tuesday with the reigning champions needing a draw to go through on goal difference.  Chile, who faced an Argentina who were Messi-less for the full 90 minutes, only lost by a single goal.  But they look a long way short of the team that finally got their hands on the trophy a year ago.  Much of the swagger and the style have been missing, the ball has not been fizzing around in those quick exchanges of passes that were such a trademark of the team under coach Jorge Sampaoli – who Juan Antonio Pizzi is understandably finding a hard act to follow.

Chile beat Bolivia on Friday with a highly controversial 100th minute penalty.  Before that the new coach had suffered four defeats in his first five games in charge.  So Pizzi’s honour is at stake on Tuesday night.  Another loss would send Chile crashing out of the competition – and it would give Concacaf three of the last eight, a measure of success for the region.  With USA and Mexico expected to go through, Concacaf’s fortunes in this tournament were always going to be judged by whether anyone else could come to the party, in the way that Costa Rica did two years ago.  So it is up to Panama – but they only have a chance if they can win the battle over themselves.

That early red card against Argentina was no coincidence.  Anibal Godoy picked up two yellows in half an hour – bringing the sides’ total to 10 in two games.  Godoy, of course, is suspended from the Chile game, along with the side’s two senior internationals, captain and centre back Felipe Baloy and centre forward Blas Perez.  A judgement on how well Concacaf do in this competition is, in considerable part, down to their replacements.