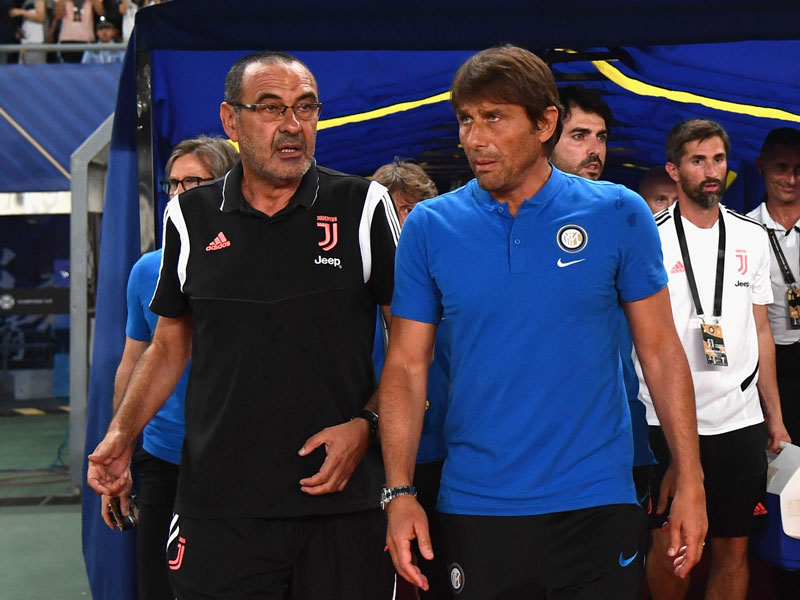 We all know that pre-season friendlies in August have a limited value when it comes to drawing conclusions about the forthcoming season. In that context then it is even harder to get too concerned about todays friendly between Juventus and Inter, given that we are still in July.

However, played in the context of the seventh edition of the International Champions Cup (the ICC played in China, England, Sweden, Singapore, USA and Wales) it does at least prompt some intriguing considerations. For a start, this “Derby d’Italia” might better be called a “Derby di Stamford Bridge”, given that it features a clash between the last two men to have sat on the Chelsea coach’s bench.

For both Juventus coach Maurizio Sarri and Inter coach Antonio Conte, this season represents a return to alma mater, with both of them facing tough assignments as they step into demanding new jobs. Conte won a premiership title and an FA Cup with Chelsea in the 2016-2018 seasons, whilst Sarri took the bare look of last season with Chelsea by winning the Europa League in May, beating Arsenal in the final.

There was a time when success like that would have guaranteed a long and honourable future with the club but those were the days when football matches were played only on Saturday afternoons and when footballers used dobbin to soften their boots. In the modern game, both men have got to prove it, all over again.

On paper, Conte has the more difficult task. He takes over an Inter that essentially stopped winning titles and trophies with Jose Mourinho’s magic “Treble Year” of 2010, when the Portuguese coach led them to Champions League, Serie A and Italian Cup success. In the meantime, of course, Juventus have ruled the waves, winning the last eight Serie A titles, consecutively. Mischievously, Mourinho suggested to Gazzetta Dello Sport the other day that really, Inter “have to win” this season. No pressure, Antonio.

Conte faces a herculean task as he attempts to impose his manic drive and rigid discipline on an Inter side that in recent years has consistently underperformed, not least because of a variety of off the field “distractions” from some of its key players. However, if we look back on Conte’s career, one could argue that his greatest achievement as a coach came with Italy at the 2016 European Championship finals in France.

Italy did not, of course, win that tournament, going out to Germany at the quarter-final stage, narrowly beaten in a dramatic penalty shoot-out in Bordeaux. What was impressive, though, was that Conte put together a compact, aggressive, organised side which beat sides like Belgium, Sweden and Spain with some ease.

Furthermore, he did that with a 3-5-2 formation based on a mix of class and grit, with the attack led by the unlikely pairing of the “unrealised” Italo-Brazilian Eder and the journeyman striker, ex-Southampton attacker Graziano Pellè. Furthermore, the ex-Sunderland player Emanuele Giaccherini was a constant midfield presence.

The point, of course, was the way in which Conte got this side to play, well above expectations. Can he work that same magic with a player like Argentine striker, Lautaro Martinez, the heir designate to his dethroned compatriot Mauro Icardi?

Can he do a similar job with an Inter side in which key figures of last season, namely Icardi, Croat winger Ivan Perisic and Belgian midfielder Radja Nainngolan, are all on the transfer list, due to be moved on at the earliest opportunity?

In the meantime, the club has moved on the market, hiring “important” players such as Atletico Madrid’s Uruguyan defender Diego Godin, Cagliari’s Nicola Barella and Sassuolo’s Stefano Sensi. Yet that has not stopped Conte suggesting that he needs a heavyweight target man up front. It could be that the club will answer his call by buying AS Roma’s Bosnian striker, Edin Dzeko who may well get the nod over Manchester United’s Belgian Romelu Lukaku, considered too expensive at €83 million.

As Sarri moves into the Juventus hot seat, his biggest worry is surely the consideration that all statistics and likely probabilities would argue that Juventus simply cannot keep on winning ad infinitum. Sarri’s squad looks very similar to that of last season, with CR7 Ronaldo leading the way supported, however, by at least two interesting “new boys” in the shape of Arsenal midfielder Aaron Ramsey and the exciting 19-year-old Ajax defender Matthijs de Ligt.

After Juventus were beaten 3-2 by Spurs in their ICC clash on Sunday, Sarri appeared to indicate that nothing much is going to change with the Juventus game plan when he said:

“Ronaldo is the best player we have…My job is to organise the other ten players, whilst he plays wherever he wants…”

With Ronaldo now 34, going on 35 (his birthday is February 5), will such a game plan suffice? In the meantime, Sarri must be wondering about the wisdom of the Old Lady’s seeming determination to sell on Argentine Gonzalo Higuain, back at Juventus after his half season with Chelsea. After all, Sarri was Higuain’s coach when he scored that record 36 goal haul with Napoli, three seasons back.

Just to add spice to the debate, Higuain looked sharp enough when he came on to score for Juve in the second half of that loss to Spurs. Whatever way it goes, both Conte and Sarri will have plenty to look out for this coming season.