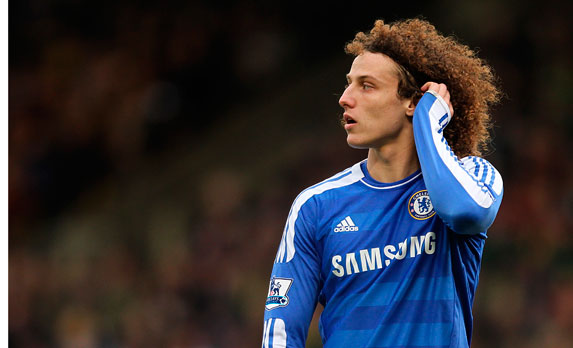 World Soccer: Was it a difficult decision to leave Benfica and sign for Chelsea last year?

David Luiz: I was lucky to enjoy four great years in Lisbon, but the chance to come to Chelsea and play in the Premier League was too good an opportunity to refuse. For me, it was another important stage in my career and my life. Life at Benfica was good and I won trophies there, but the call of Chelsea was simply irresistible. I joined Benfica from Vitoria in Brazil, which was a huge upheaval, leaving my home country and moving to a different continent. By comparison, moving from Portugal to join Chelsea in England was easy.

You have been in the Premier League for a year now. What are your impressions of English football?

It is incredibly tough to play in the Premier League. All around the world, modern players are becoming stronger and fitter, but it is even more intense in the Premier League. You have to be much quicker with your feet and your head in England compared to Portugal. But it is not just the physicality, it is also the quality of the players at the top clubs. Which other league can boast players like Fernando Torres, Wayne Rooney, Javier Hernandez and Didier Drogba? There are a lot of excellent guys around.

Both you and Chelsea have received criticism at times this season. How do you deal with such comments?

As a group we know we have to remain united and focused. Of course we are aware of some of what is said, but it is not unusual as a footballer to be criticised. As a team, we know what our targets are and it is our responsibility not to be distracted. Personally, criticism does not affect me because it is inevitable, especially when you are a defender. I do not have any bad feelings towards those who say negative things, I just try to work even harder.

Has the media reaction to Chelsea’s manager, Andre Villas-Boas, affected the squad?

It makes no difference to the players because we trust and support the manager. What happens on the pitch, on the training ground and in the dressing room is what really matters and not what people say or write.

You are certainly an adventurous defender. Are you really just a frustrated midfielder?

No, but I understand the question. When I was younger I played in midfield, but I am a defender and I relish my role. It should not be impossible for a defender to make an impact at the other end of the pitch, but, of course, the skill is knowing when to attack and when to defend.

Would you agree that it has been a frustrating season for Chelsea so far?

It is true that we have had some disappointments, but we have also enjoyed some good times. I think we are close to finding the right formula and there will be many big battles to come in the second half of the season, in both the Premier League and the Champions League. Expectations, of course, are very high at Chelsea, but I don’t think we are far away from success. I believe the team is improving.

How do you feel you have adapted to living in London?

I knew London could be a tough place for a Latin player, so I have set up a system where my friends and relatives are always visiting and I get a cook to prepare Brazilian dishes for me at my home. This helps me feel happy and content. It also helps that I love London because it is an incredible city with so many options. You can find any cuisine in the world here, and there are so many theatres and wonderful places to visit. And the way English people react to you is also amazing. For such a big city, it is also very friendly.

Who has been the greatest influence on your career?

I was born with a football by my side. My father, Ladislao, was a professional footballer with Atletico Mineiro and from an early age I was in close contact with
the game. My dad is my hero and he still wants to play and keep himself fit. I also admire him because he sacrificed his career for the good of his family by quitting the game to find a new job when his football career was in trouble.

You have become famous for your hairstyle…

I started to grow my hair when I was playing in Portugal because I was cold in the winter and I wanted to keep my ears warm. Now it just feels normal.

Tell us something about yourself that people might not already know…

I have begun a project to try to reduce my carbon footprint. I hired a company that calculated all my emissions, including car and plane journeys, as well as other energy consumption. I planted several trees in Parana, a state in Brazil, and have already managed to offset my 2011 emissions. I believe the final total was almost 18 tonnes of carbon dioxide.