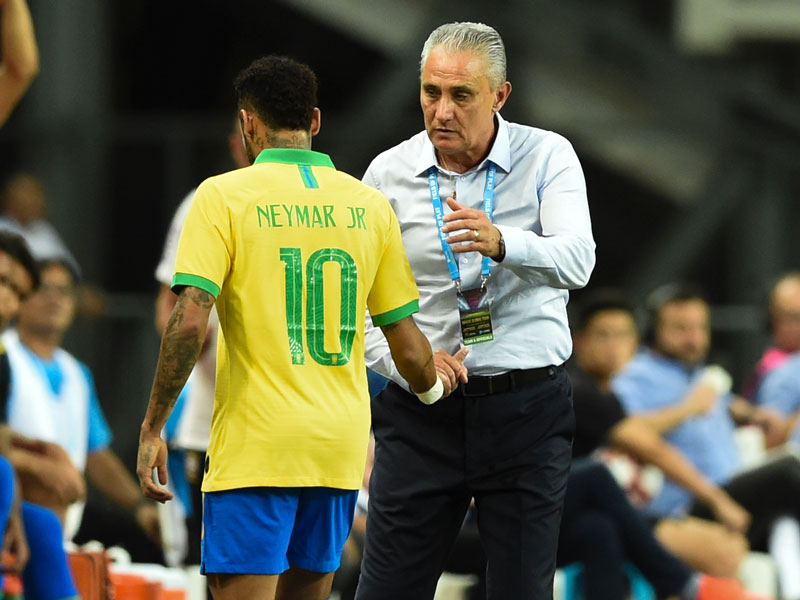 Not 14 weeks have elapsed since Brazil beat Argentina 2-0 in the Copa America semi final. There as some controversy about refereeing decisions, but no doubt that Brazil were the better side. Five days later they deservedly won the Copa, while Argentina braced themselves to lose Lionel Messi to a suspension after accusing the competition of being riddled with corruption.

And yet, little more than three months later, it is Brazil coach Tite who is facing some pressure while Argentina’s Lionel Scaloni is sitting pretty.

In four subsequent matches Brazil have managed no victories and kept no clean sheets. Doubts exist about the architecture of the side. After years basing his team on a (according to preference) 4-1-4-1 or 4-3-3, Tite has wanted to do something different – bring Neymar into a more central role. The experiment was hampered by an injury he picked up early in the second game of the current FIFA dates against Nigeria, forcing a swift substitution. But the questions remain. Do Brazil possess the attacking mobility to get the best out of Roberto Firmino at centre forward? Does fielding Firmino, Neymar plus two wide attackers leave them too open to the counter attack?

When Tite took over a little over three years ago, the parts dropped instantly into place. Now he is going to work harder to find the right blend.

Argentina, meanwhile, are moving with surprising serenity. Part of this, even in his absence, has to do with Messi. During the Copa he threw off his previous timidity or aloofness, and turned into a genuine leader of the pack. This strengthened the hand of Scaloni, who was upgraded from caretaker to permanent coach.

Scaloni has been further upgraded by a new generation of midfield and attacking talent. Last month new centre forward Lautaro Martinez scored a stunning hat trick to turn a potentially tough game against Mexico into a 4-0 rout. And a new group of midfielders – Exequiel Palacios, Nico Dominguez and Alexis MacAllister – all made their presence felt. Over the last few days striker Lucas Alario and wide attacker Lucas Ocampos have been successfully brought into the squad. Even allowing for the fact that Ecuador are in transition and have a caretaker coach, Sunday’s 6-1 win is an impressive scoreline – as was the previous Thursday’s 2-2 draw away to Germany.

Serious structural problems remain. There is a worrying dearth of top class defenders, and backed by the Dortmund crowd the Germans took quick advantage to go two goals ahead. Scaloni, though, read the game well, and made an adjustment at the interval, switching from a back four to a line of three, stopping the Germans higher up the field and giving his side the platform to snatch a draw.

Results. Of course, are never the be all and end off of friendly matches. Events in these last two months will be quickly forgotten as soon as the next World Cup qualifying campaign gets underway in March.

But there is a chance coming up to measure the respective progress of Brazil and Argentina. They meet in Saudi Arabia on November 15th.