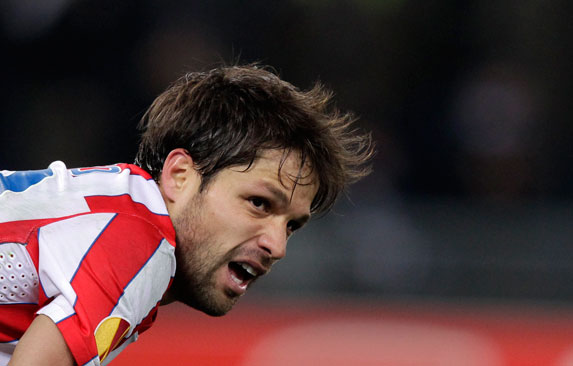 World Soccer: You have played in Portugal, Germany, Italy and now Spain. What brought you to Atletico Madrid, on loan from Wolfsburg?

Diego: I have joined one of the most popular teams in Europe, one of the biggest in Spain, and one of the strongest leagues. When you put those things together it’s
a very attractive proposition, the perfect combination. The decisions you take always depend on the moment, the timing. This is the second time that I have had the chance to come to Atletico. The first time the opportunity arose I had a problem with Werder Bremen, who didn’t want me to leave for what was being offered. They asked for more money, and it went back and forth, the usual thing. Last year [when at Wolfsburg] we spoke again and this time it was immediate. I wanted to come. The chance to play in Spain was very important – and at a big club too.

Does constantly changing teams make it difficult for you as a player?

It can be hard, but it depends on which team you play for. If they have a system that facilitates your play, in which things come naturally and in which everyone plays a style that they are comfortable with, then it is easier. That did not happen at Juventus. They had built a team based on a specific idea and then, with the change of coach, everything changed. We played well some games, badly in others, but it just didn’t quite work. It was hard for me. The other thing in Italy was that when you’re trying to play a neat, passing game, based on skill, and you find that the pitches are bad…

Really? In what way are they bad?

They’re dry and just, well, bad. Some pitches are very bad. The ball bobbles, it doesn’t roll. The pitch isn’t flat or even, which makes it hard to play the ball. Also, Italian teams defend very well and make it hard for you. But that doesn’t change the fact that as an experience it was spectacular. I had a great relationship
with the fans and my team-mates. It was also a great experience to play for one of the biggest clubs in the world.

Does it sometimes feel like your role, that of the playmaker, is being squeezed out of football?

I hope not. There are not many players in that role now, but you do see big teams play with number 10s, so I don’t think it’s a problem. The role has changed a bit, though. In modern football the number 10 has had to adapt, but there are still players whose function is to organise the play. At Atletico we play a 4-3-3 and I play in the middle, but there are other obligations. At Barcelona, there’s [Andres] Iniesta who organises the play and has freedom when he has the ball, but when he doesn’t have it he has to drop back
into the middle. Then you have a player like Xavi who plays deeper, closer to the defence, but does it with the ball – it is his role to organise the team.

Why do you think you have moved around, from country to country, so much during your career?

Every time I have moved it has been because I had a better opportunity. It happened when I was in Portugal and I had the chance to move to Werder Bremen. It happened from there to Juventus. Maybe you could say that it was different when it came to the next step. After a year at Juventus a new coach came in and a new sporting director too. They had different ideas and that led us into a situation in which they were looking for a solution to the problem. The solution was a very good one – which was the chance for me to return to Germany, where I had played well and I had really enjoyed myself. The German league is one that I really like.

You left your homeland at 19. Are Brazilians forced to leave too soon because of the economic weakness of the league?

I think that’s changing. In recent years, the Brazilian league has not been forced to sell players for financial reasons as much as in the past. If there are great players emerging now, like Neymar for example, it’s not a question of money. Brazilian clubs can’t keep an entire team together, but they can keep two or three players. The thing is that, for the player, the chance to play in Europe, in the Champions League, at a big club, with the best players in the world, is still the dream. That’s still an objective.

Your old Santos team-mate Robinho went through a similar process to you, but he was ultimately unpopular in England. Do you think the English treated him unfairly?

It’s hard. You need patience and people don’t always have that. Players always try to do their best and when things don’t go well that player has his responsibility for
it, but those [the coaches] that are trying to use that player’s talent also have responsibility. They have to bring that talent out; that’s their job. Robinho played for a Manchester City team that did not suit his style of play. I think that was the reason why he did not play well. But for me he is still a spectacular player.

England is the one big European league missing in your collection. Would you go there?

It’s one of the strongest leagues in the world and the most competitive. There are three or four teams that can win the league and that is attractive. But I have only just arrived in Spain and I am happy here. It’s been everything I wanted it to be; the style is good, the experience too.