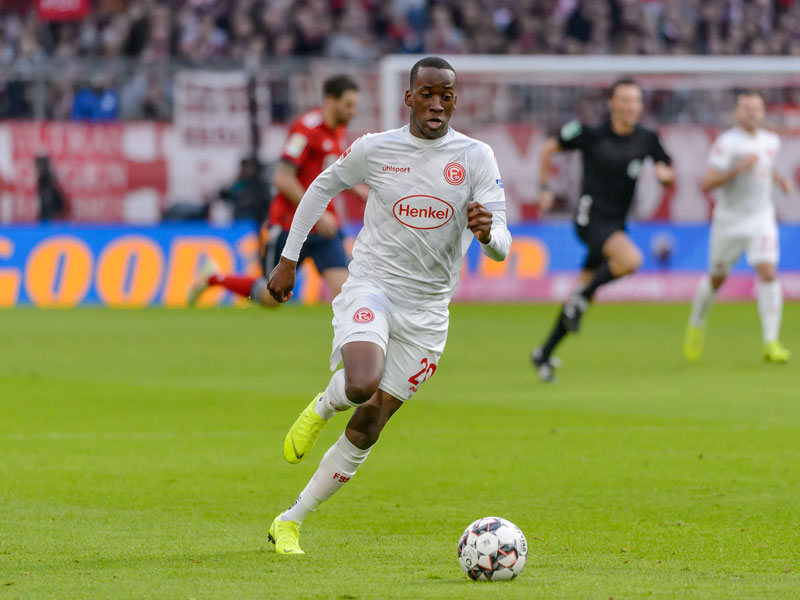 On target with a brilliant hat-trick as Fortuna Dusseldorf came from behind to claim a dramatic 3-3 share of the spoils at faltering Bayern Munich, Belgian Under-21 winger/striker Dodi Lukebakio is positive proof of the benefits of the loan system.
After swapping mother club Anderlecht for Watford early this year, the Belgo-Congolese youngster found the going very tough indeed at Vicarage Road, distinctly ill-at-ease on his Premier League debut – a 15-minute substitute cameo against West Ham in February – and was left on the fringes for the rest of the campaign. But how well he has bounced back since joining newly-promoted Fortuna on a single-season loan deal this summer.
A few months on and he is now honours board material in Germany. The first Bundesliga marksman to score three against Bayern since Danish centre-forward Ebbe Sand did so for Schalke in 2001 and the first player ever to put three goals past the great Manuel Neuer in a domestic league encounter.
What has made the difference ? In marked contrast to his ghost ship experience at Watford, his Dusseldorf coach Friedhelm Funkel believes in him; it really is as simple as that. Unlike the English top-flight, Bundesliga bosses will back a hunch.
“Dodi’s a young man with a lot of self-confidence and has settled in here very well,” says Funkel. “He’s extraordinarily quick, has great dribbling ability and is ice-cool in his finishing. He’s an unpredictable sort of player. That’s why we like to give him as much freedom on the pitch as possible. He has the potential to develop into a very good footballer, though must not get carried away.”
Funkel, a pro coach for the best part of three decades, is a canny old bird. At the same time as heaping praise on young Dodi, he also was keen to point to Bayern’s current frailties at the back: their lack of pace and poor positional play. “Defence is the key to everything and Bayern’s is weak,” Funkel told Sky Sports Deutschland.
While it’s most unusual for a Bundesliga coach to openly slam the failings of opponents, Funkel clearly was sending a “keep your feet on the ground” message both to Lukebakio and rest of the team. And justifiably so. For all their heroics at the Allianz-Arena, Fortuna only have won twice this season and very much remain in the relegation mire.
The paths of Dodi and Dusseldorf initially crossed back in the summer of 2017, when he was playing on loan at Belgian side Charleroi. In a pre-season friendly against Fortuna, he scored with a spectacular overhead kick and so memorable was it, that fans of the Rhinelanders broke into sustained applause.
“Naturally I can remember that goal,” smiles Lukebakio. “On hearing about Fortuna’s interest in me, I straight away thought of that bicycle kick. I’m very happy that I’m now a Dusseldorfer.”
Well, at least until the end of the season. He is under contract to Watford until 2022 and will have to return to Hertfordshire in July.
[collection name=”small” accordion=”mobile” excerpt=8]
What We Learned
1. Ginter setback.
Over-achieving Gladbach, currently in second-place in the Bundesliga table – four points adrift of unbeaten leaders Dortmund –  will have to do without German international defender Matthias Ginter for a considerable period after he suffered a fractured eye socket and jaw in an accidental collision with Hannover forward Noah Bazee. ” Matthias is unlikely to be available this side of the New Year, ” declared Gladbach coach Dieter Hecking. “It’s very frustrating. He was in excellent form and was responsible for much of the stability of our back-line.”
2. You’re out
In a yet another sign of the crisis enveloping Bayern Munich, club legend Paul Breitner has been banned from the VIP section of the Allianz-Arena. Breitner, associated with the club for almost half-a-century – as star full-back or midfielder, skipper, scout, advisor and ambassador – is thought to have angered powerbrokers there with his public criticism of the club’s recent anti-media rhetoric. ” There was a call from Mr Dreesen (Bayern’s vice-chair and financial director Jan Christian Dreesen), Breitner told Bild. ” I was being advised by Uli Hoeness (Bayern’s president) not to show my face in the grandstand for the foreseeable future. I expected as much. ” Breitner and Hoeness used to be the best of friends. Sadly, no more.