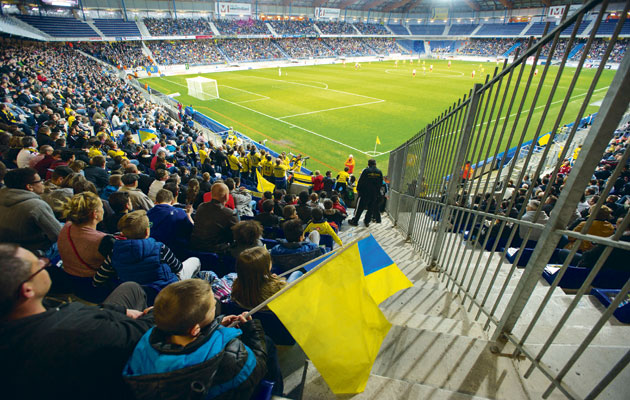 The news that Sochaux are to be sold to Chinese electrical company Tech Pro Technology Development for €7million will come as no surprise to the club’s supporters. After all, rumours had been circulating for a year that carmakers Peugeot, the club’s long-term owners and benefactors, wanted to cut all ties.

However, the sale is still something that fans of Football Club Sochaux-Montbeliard will find hard to swallow. This, after all, is a club that has been joined at the hip to Peugeot since day one, when family member and company director Jean-Pierre Peugeot founded it back in 1928.

However, relegation from Ligue 1 at the end of last season – after an unbroken run of 66 years in the French top flight – coupled with tougher conditions in the car-manufacturing business, convinced the iconic company the time was right to get out.

For many people, especially those in the Franche-Comte region in the east of the country where the club
is situated, the separation of Sochaux and Peugeot had been simply unthinkable. Sochaux have always played in the blue and yellow colours associated with Peugeot, and the company’s instantly recognisable lion crest has also served as the football club’s badge for as long as anyone can remember.

But with a deficit of €17.6m to deal with after relegation in 2014, Sochaux’s benefactor opted to look for an escape route.

It’s too early to say what this will mean for the future of the club from a sporting perspective. But what is certain is that the new owners will have to work hard if they are to retain the special bond that exists between the club and the region’s working classes. With 10,000 people working for Peugeot at its nearby headquarters, and with numerous car-business suppliers also present in the area, the new owners will need to be mindful that Sochaux is one of a tiny minority of professional football clubs that still retainsimportant ties with the public that originally formed its core support.

Current Sochaux president Laurent Pernet is himself a long-term member of Peugeot’s senior management team, having been with the company for 25 years.

“There will always be a really close tie between Peugeot and Sochaux,” says Pernet. “Lots of Peugeot employees are supporters, so it’s in the interests of the future owners to retain this connection.”

Li Wing-sang, the CEO of Tech Pro Technology Development’s parent company Ledus, has been quick to talk the talk, saying that he is “very aware of the history of this club” and wants “to retain its unique culture”.

Li has been seen at several Sochaux games since serious negotiations got under way around February and says: “I want to take my time to understand everything about the club, especially its management structures. And I want to do everything I can to help Sochaux climb out of Ligue 2 and back into Ligue 1.”

Sochaux has traditionally been one of the most fertile breeding grounds for young French talent. The club’s academy has produced a number of French internationals in recent times, including Benoit Pedretti, Jeremy Menez and Marvin Martin.

But things have not been easy for the current first team under coach Olivier Echouafni. He has called the Chinese takeover a “little revolution”, but it remains to be seen whether the new owners will be putting substantial funds at his disposal.

The €7m they have put on the table to buy the club is small potatoes for a company that is listed on the Hong Kong stock exchange and has a market cap worth billions of HK dollars, so there is money available should the new owners decide to get the chequebook out.

And as we all know, the reaction of any club’s loyal supporters to a takeover will be dictated by one thing only: what happens on the pitch.