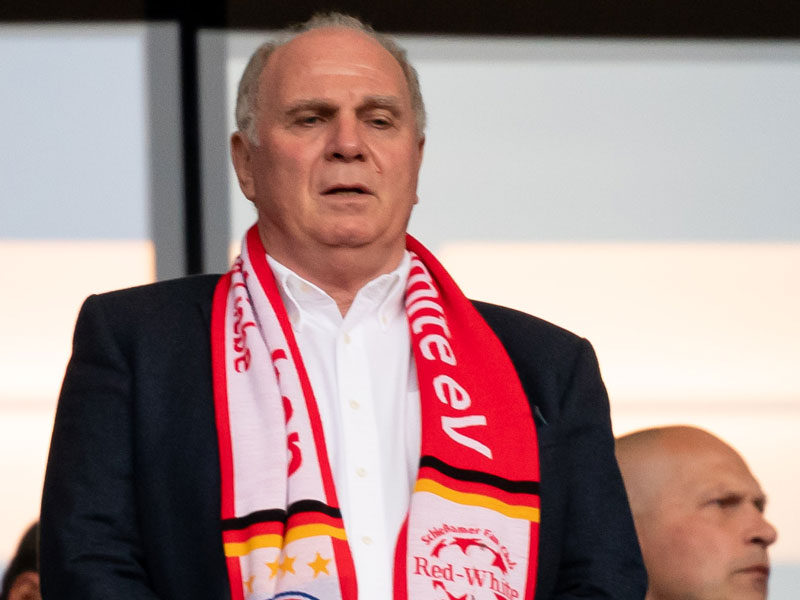 Nick Bidwell’s Notes From Germany: End of An Era Looming At Bayern Munich

After almost a half-century there as a player, general manager and latterly club president and head of the supervisory board, the ever-colourful Uli Hoeness is thought to be preparing to step aside from his leadership roles.

According to reports in the Bild tabloid, Hoeness will not be seeking to renew his presidential mandate at Bayern’s AGM in November and though the 67-year-old will remain a member of the supervisory board, his days of vociferously calling the shots are effectively over.

Hoeness has refused to comment on the ensuing torrent of speculation about his future. In a short and sweet statement to Kicker magazine, he asked the media to be patient. “On August 29, I will inform  the board of my decision. Up until then, there will be no official communique from me.”

Loud, proud and intensely committed to his club’s well-being, Hoeness was without peer as an administrator. If Bayern are now a major ‘brand’ in the world game, it’s mainly down to him. A 24/7 hands-on operator, a pioneer in commercial income streams and uncompromising defender of his organisation’s interests. He was the bullish force of nature in Bayern’s corner. Loved and loathed in the country at large. But never ignored.

For all his energy, drive and passion for Bayern red, the writing has been on the Hoeness wall for quite some time. His imprisonment in 2014 for tax evasion was a major blow to his credibility and at last year’s AGM, he was bitterly attacked by Bayern fan Johannes Bachmayr, who accused him of making a string of misguided personnel calls and running a “one-man show”.

In many ways this episode was the beginning of the end for Hoeness at Bayern. Bachmayr’s eleven-minute rant garnered applause a plenty. Hoeness later would try and fail to elicit an apology. The once omnipotent Uli no longer held sway.

The Frankfurter Rundschau newspaper have even gone as far as to claim that Hoeness has been under pressure to step down from other club big-wigs, including executive vice-chairman Jan-Christian Dreesen, sponsorship and merchandising guru Andreas Jung and global strategy director Jorg Wacker. Their considered opinion? That the Hoeness approach to the business side of things was thoroughly out of date.

Hoeness’ successor as president is likely to be former Adidas CEO Herbert Hainer, who has served on the Bayern board since 2002. Like his good friend Hoeness, he is the son of a butcher. Football can be a bloody affair at the highest level.

Dortmund skipper and attacking midfielder Marco Reus has been named Germany’s Player of the Year for 2019. He was in fine fettle for the Bundesliga runners-up last term, scoring 17 goals and setting up another twelve. Young Leverkusen schemer Kai Havertz and Bayern Munich full-back Joshua Kimmich came second and third in the poll respectively.

If Bild are correct, Eintracht Frankfurt currently are weighing up the pros and cons of a swoop for ex-Bayern wing-wizard Franck Ribery. Eintracht apparently have made contact with representatives of the 36-year-old and are keen to bring in the Frenchman on a performance-related single-season deal. Ribery, however, would prefer a two-campaign agreement.