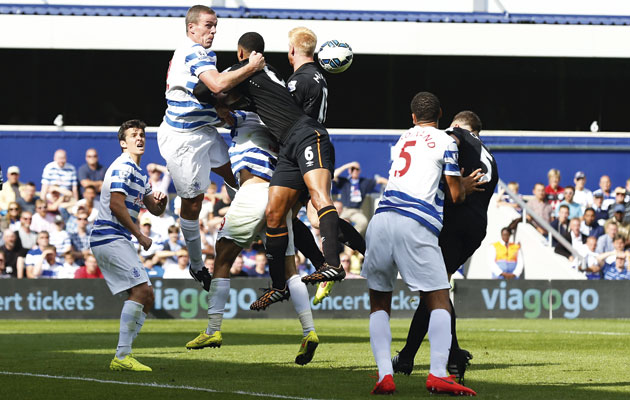 As soon as Louis Van Gaal moved away from a back three, he won his first game as Manchester United manager – though it helped that they were playing a supine Queens Park Rangers, who had switched away from three at the back to win their first game of the season, against Sunderland, in their previous fixture.

The reaction in some parts to Van Gaal’s switch was one of sneeriness: goodbye 3-5-2, you were only ever a strange foreign import whose best days were behind it. But that’s nonsense.

Van Gaal has said that he hadn’t had sufficient fit defenders to play with three centre-backs against QPR and, while the midfield diamond he ended up employing may become the default, it would be no great surprise to see the back three return at some point. For him, philosophy is far more important than shape. But history has shown that it tends to take his sides a little time to learn how to play his way, whatever formation they adopt.

It may be that English defenders, brought up in a culture in which four at the back predominates, are resistant to a back three, through unfamiliarity as much as anything else.

Perhaps Van Gaal underestimated the cultural conservatism of English football, but that still doesn’t explain why he seemed so set from the start on playing a formation he had himself never employed until adopting it with Holland six months ago. Although both his Ajax and Barcelona sides played at times with a 4-3-3/3-4-3 hybrid, that was created by one central defender stepping out into midfield, leaving a centre-back and two full-backs, rather than three central defenders. It was an injury to his key midfielder Kevin Strootman, allied to fears about his defenders’ capabilities in one-on-one situations, that led to a radical rethink that seemed intended as a short-term measure for the World Cup.

It worked well for him in Brazil as Holland reached the semi-finals. But still, after a quarter of a century playing one way, why switch?

It was Harry Redknapp, perhaps, who offered the best answer, when explaining his switch to 3-5-2 with QPR. Loic Remy, he said, was a forward who needed a partner, so he had to play in a front two. But Redknapp didn’t want to lose a midfielder as he felt he still needed three central players to avoid being overmanned. The best way to play two strikers and three in central midfield, he argued, was to use wing-backs and three centre-backs. That logic has made three at the back such a feature of Italian football, where a general dearth of wingers, a historical issue, means that full-backs don’t have to be particularly defensive.

QPR’s problem was their centre-backs. Rio Ferdinand may once have been ideal to play the role of the passer who steps out into midfield, but he has looked every one of his 35 years so far this season, while Richard Dunne, playing to his left, simply doesn’t have the mobility to cover across behind the wing-back.

The sale of Remy to Chelsea forced a rethink anyway, and against Sunderland at home, QPR, having lost their opening two games, were in a more conventional 4-4-1-1 formation. 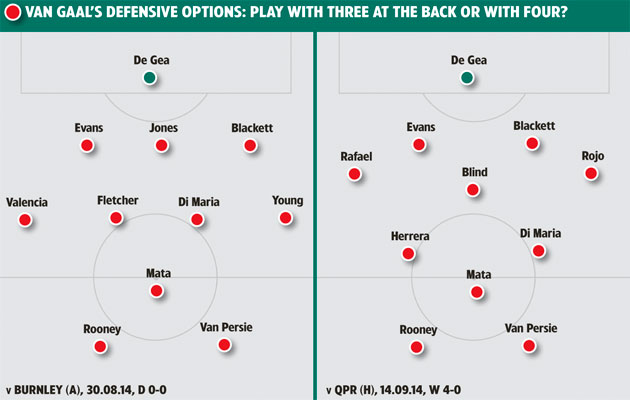 Van Gaal was faced with a similar issue. His two key players were Robin Van Persie and Wayne Rooney, and given neither is keen on playing wide – in a possible 4-3-3 – that meant playing them as a pair. Van Gaal, though, is a coach who has always preferred a midfield three – a problem initially at United given their lack of squad depth in that area. So, like Redknapp, his solution was to go to three at the back.

A back three has two other advantages: for a team playing deep and ceding midfield, it offers additional protection; for a team pushing high, it offers the possibility of getting another player high up the pitch to press early. The former is how Hull City have used the formation successfully and how Redknapp presumably wanted to use it. The latter is probably of more relevance to Van Gaal, although Angel Di Maria’s excellence on the counter-attack means United may look to sit deep and break against better sides.

There was one other possible solution to Van Gaal’s dilemma – one that has been intensified by the arrival of Radamel Falcao – and it was that which he took against QPR. The back four returned,
the front two remained, and in midfield he fielded a diamond: Daley Blind holding at the back of midfield, flanked by Ander Herrera and Di Maria, with Juan Mata behind Rooney and Van Persie.

It’s not, of course, that far removed from 3-5-2. Push Blind back a few yards, advance the two full-backs and the shapes are all but indistinguishable. In a 4-3-1-2 (or 4-1-2-1-2), there is an onus on the full-backs to offer width and a responsibility for the holding player to offer cover when they do.

The diamond has been coming back into vogue in England, with Brendan Rodgers using it to some effect at Liverpool and then Roy Hodgson using it with the national side.

In both cases Raheem Sterling becomes the key creator; his pace and trickery transferred from the flank to a role behind the strikers. That, in turn, is part of a wider trend of using players who would usually be considered wingers in a central role, testing centre-backs and midfield holders against quick players who can dribble, a task traditionally left to full-backs.

Terms such as 4-4-2 and 3-5-2 have always been a little crude and are general designations to give an outline of the shape of a team’s play. Increasingly it feels that the key battles are being fought on a micro level within those frameworks. Certainly the widespread dismissal of 3-5-2 and acceptance of the diamond, when the two as practised by United are so similar, makes little sense.

Formations in themselves are never good or bad, right or wrong; what matters is their application.