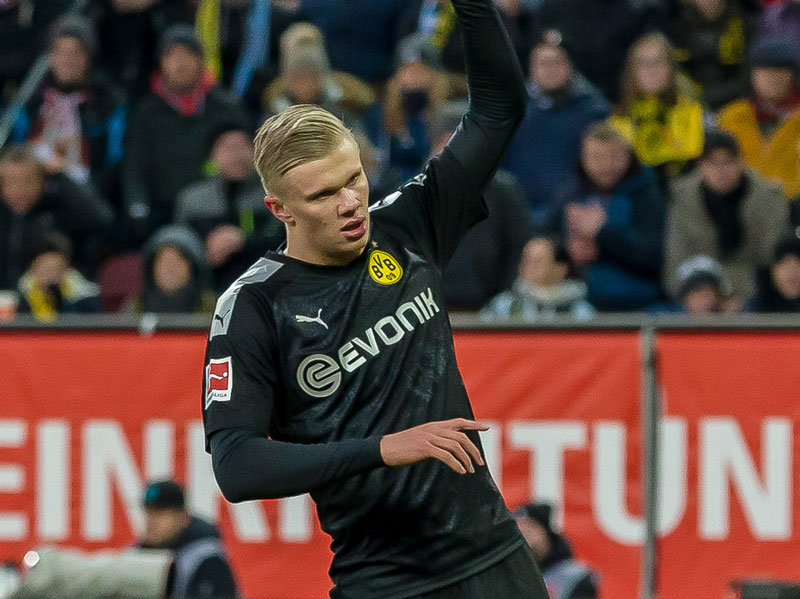 As easy as one, two, three. Dortmund’s new Norwegian striker Erling Haaland enjoyed a sensational start to his life in the Bundesliga, coming off the bench to net a 20-minute hat-trick in a 5-3 come-from-behind win at Augsburg.

Entering the fray early in the second-half, Haaland, 19, did not waste a second of his ‘Schwarz-Gelben’ debut. He scored with virtually his first touch – a left-footed cross-shot after the Augsburg defence fell asleep – led the line with intelligence and physical presence and most of important of all, scored twice more. What a story. What an impact.

Haaland, who only cost the Dortmunder 20 million euros thanks to a convenient release clause in his Salzburg contract, looks to be the answer to the Ruhr giant’s prayers. They have not regularly fielded an out-and-out centre-forward since Robert Lewandowski strutted his stuff there (2010 to 2014), with various coaches preferring to travel the freewheeling ‘false nine’ route.

Shortish, quicksilver frontrunners do have a place in today’s game. But sometimes an expert is required.

Dortmund very much needed a player of Haaland’s ilk. Someone who is both a tall, muscular and robust attacking point of reference and an outstanding finisher.

He is not just a classic target man, selected to win headers and have a limited radius of action between the two opposition centre-backs. He makes excellent runs into advanced positions, is quick, will drop deep and skilfully engage in combination play and puts in a solid pressing shift.

He also brings with him a double helping of attitude, fighting spirit and perfectionism. Not long after coming on against Augsburg, he bawled out a teammate for not giving him the ball and was confident enough after the game to tell general manager Michael Zorc, “That’s the reason you bought me.”

The arrival of such a ballsy, gritty individual should be a shot in the arm for the Black-and-Yellows. Many of the Dortmund squad can be a little too nice at times. Either choir boys or perfect son-in-laws. Hopefully Haaland’s drive and killer instinct will serve as the example to follow.

” His body language is A1,” says Michael Zorc. “It couldn’t be better. This will help us and encourage the others to push on. He already is totally single-minded.”

Rumours have emerged of a something of a rift opening up between Bayern caretaker coach Hansi Flick and club director of sport Hasan Salihamidzic. The former believes that the season’s objective are being put at risk by a distinct lack of squad depth, a state of affairs exacerbated by a string of injuries. Meanwhile Salihamidzic is adamant that January transfer activity is neither necessary or practical. Tellingly, Bayern and Germany star Joshua Kimmich has the same take as Flick: “At the moment, our squad is not big enough.”

New Schalke second striker Michael Gregoritsch certainly had a busy evening on his debut for the Royal Blues, playing a key role in his side’s impressive 2-0 home victory over high-flying Borussia Monchengladbach.

Persona non grata at Augsburg after going public with his unhappiness with the role of bench-warmer, the Austrian international seemed to be here, there and everywhere against Gladbach, making a goal-line clearance at 0-0, setting up the opener for Suat Serdar and adding the finishing touch to a brilliant counter-attacking move. “You can imagine how good it was for me to get stuck in again after a a half-year without playing,” declared a clearly delighted Gregoritsch. “I can’t say on national TV what was going through my mind.”