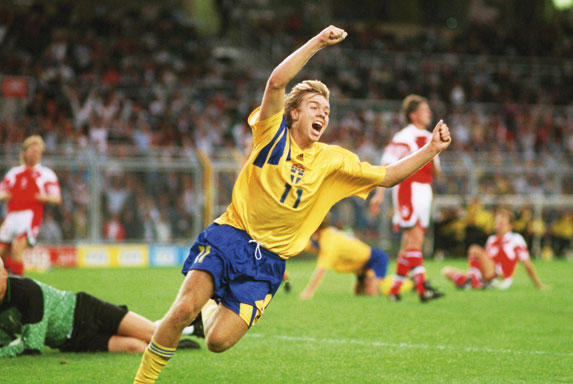 The 1992 European Championship took place against a backdrop of huge political change sweeping across Europe, as the upheavals caused by the break-up of the former Soviet Bloc impacted on the European football landscape.

The biggest beneficiaries of the changes were Denmark, who were called in as last-minute replacements at the finals when Yugoslavia were barred on security grounds by UEFA following the country’s descent into civil war.

Denmark, who had finished a point behind Yugoslavia in their qualifying group, were given just two weeks notice to prepare for the finals, with coach Richard Moller Nielsen famously putting on hold plans to refurbish his kitchen. His team ended up going all the way to the Final, where they beat Germany in one of the game’s most unlikely cup triumphs.

The political changes had a major impact on the qualifying stages. The former East Germany disappeared from the map of Europe just as the event kicked off – although Thomas Doll, Matthias Sammer and Andreas Thom were later allowed to play for a united Germany at the finals.

End of the USSR

The USSR, which was in the throes of being broken, qualified ahead of Italy but went to the finals under the title of the Commonwealth of Independent States.

Scotland qualified for their first European finals by finishing ahead of Switzerland and Romania, while England topped their group ahead of the Republic of Ireland.

Spain did not play their final match against Albania because of security concerns in Tirana. However, by then Spain were already 10 points behind group winners France after a hugely disappointing campaign. Meanwhile, Germany and Holland won their groups following home victories over Wales and Portugal respectively.

So the finals draw featured hosts Sweden, in the finals for the first time, Denmark, France and England in Group 1, with Holland, Germany, Scotland and the CIS in Group 2.

Sweden proved to be amicable hosts and they topped their group thanks to a wonderful Tomas Brolin goal that sealed victory against a disappointing England side in their final game.

Denmark finished as group runners-up thanks to a 2-1 win over an underachieving France side coached by their old maestro Michel Platini, who would quit after the first-round exit and take up a role as president of the 1994 French World Cup organising committee.

Holland and Germany came through Group 2, although the Germans needed a last-minute goal from Thomas Hassler to take a point from their opening game against the CIS. Holland topped the group after beating Germany 3-1 in the decisive final game. The Germans still progressed to the semi-finals, though, because Scotland beat the CIS in the other match.

Holland were the favourites to triumph in their semi-final in Gothenburg, but came up against a determined Denmark side who defied the Dutch attacks and held on for a 2-2 draw before triumphing in the penalty shoot-out. Four years on from his imperious goal in the 1988 Final, Marco Van Basten missed the crucial spot-kick for Holland.

Germany proved too strong for Sweden in the other semi in Stockholm, even though Brolin continued his fine tournamentwith a late consolation in a 3-2 defeat for the hosts.

The Final in Gothenburg was expected to be a formality for Germany, but Denmark had not read the script. Moller Nielsen had instilled an unshakeable confidence into his players, from Peter Schmeichel in goal, through to captain Lars Olsen, midfielders John Jensen and Kim Vilfort, and forward Brian Laudrup – and goals from Jensen and Vilfort produced one of the greatest shocks in the international game. 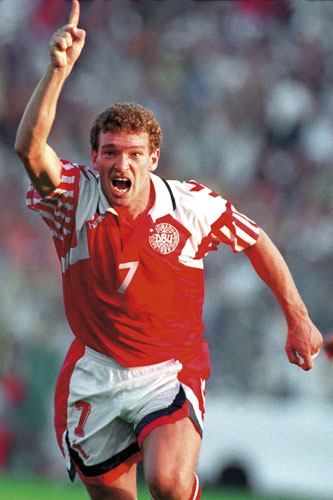 Eight out of eight

France became the first team to claim a perfect record in a UEFA European Championship qualifying group, winning eight out of eight games.

Denmark’s triumph came days after the country had voted in a referendum to stay out of the EU. As foreign minister Uffe Ellemann-Jensen observed: “If you can’t join them, beat them.”