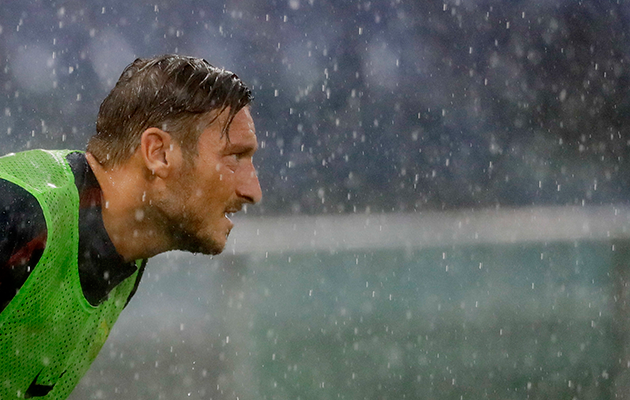 When the storm is raging, when the ship is taking on water from every porthole, what do you do? Why, you bring on “Er Capitano”, Francesco Totti, who else?

Thus it was yesterday on another momentous “Totti Day” at the Olympic Stadium in Rome. This time, the raging storm was all too real as an autumnal thunderstorm forced referee Piero Giacomelli to suspend the start of the second half of Roma v Sampdoria, with the scoreline 1-2 for the visitors.

The deluge eventually stopped, however, and after an 80 minute pause, the second half started. Coach Luciano Spalletti had, in the meantime, made two important changes, bringing on 39-year-old Totti (he will be 40 next month) as well as Bosnian striker, Edin Dzeko.

Making his seasonal debut for Roma, the seemingly eternal Totti delivered a master class of footballing craft. Totti has always had a great “eye” for his team mates’ position. In this prolonged Indian summer to his 25-year long career with Roma, that “eye” has become infra-red.

Hitting his now familiar, first time through balls, Totti laid on at least eight potential goal chances for his team mates, with one of those seeing Dzeko score the Roma equaliser in the 61st minute. With the adrenaline flowing, with the crowd (small at 28,000) thoroughly aroused, Totti kept up the good work…right into time added-on.

In the third minute of injury time, when a 2-2 result looked by far the most likely outcome, he laid an yet another of his first time through balls for Dzeko. This time the Bosnian striker tried to turn his defender, Slovak Milan Skriniar, winning himself a highly dubious penatly as the Sampdoria defender caught him with his attempted tackle. Dzeko’s slow and late fall only increased the suspicion that this was a penalty that many referees would not have given…

Never mind, up stepped “Er Capitano” to slot home the winner, his 305th goal in 25 seasons for Roma. He had yet again saved the day. It used to be that Totti was good at winning football matches, now it seems he can also get the better of a raging storm.

As Indian summers to a career go, Totti is having the father and mother of a final chapter. Since last April, he has now come on in eight different Serie A games, making a difference each time, either by scoring five goals or by setting up another three. Half in jest, commentators asked yesterday, “Why Should He Retire If He Is Still In This Form?”.

Not for the first time in his career, Totti gave the front page headline writers something to work on: “Assists, A Penalty And A Triumph. Why Retire?”, headlined Gazzetta Dello Sport; “Totti: He Is The Sunshine That Lights Up Roma”, replied Corriere Dello Sport; “Roma Is About To Drown But Totti Saves Her”, went Roman daily, Il Tempo.

All of this enthusiasm may well be a little over the top. However, as we have already had reason to point out, this last season (if it is indeed a last season?) of Totti will be a last season such as Italian football has never before witnessed. Italy’s most iconic footballer can hardly be expected to keep up his current strike rate, both in terms of goals and, more importantly, influence on the play…or can he?

In this phase of his career, though, Totti has learned to adapt brilliantly to his role of late substitute. Never fast, Totti now avoids being caught in possession by playing first touch football, practically 100% of the time. Coming on late in the game when rivals are tired obviously helps. Having x-ray vision and magical feet helps even more. Between now and the end of the season, stand by for other “Totti Days”.

Elsewhere, this third day of Serie A confirmed a number of our most obvious suspicions. Firstly, the Milan clubs still have a long way to go, as witness Milan’s 1-0 home loss to Udinese and Inter’s last gasp, 2-1 win over plucky Pescara. It is a toss-up as to which coach here has the hardest task, Vincenzo Montella at Milan or Dutchman Frank De Boer at Inter.

Secondly, Napoli’s impressive 3-0 win away to Palermo on Saturday night would suggest that there is “life after Higuain” after all. We will know more about Napoli’s well being after tomorrow (Tuesday) when the Neapolitan club travels to the Ukraine to face Dinamo Kiev in their opening Champions League tie. Remember, too, Kiev was the site of a painful defeat to Dnipro in the 2015 Europa League semi-final so Napoli have a point to make.

Finally, last but clearly not least, the Old Lady’s half hour demolition job on Sassuolo on Saturday night looked even more dominant than most of us had predicted. We know that Juventus are by far the strongest team in the land. We did not know that it would take them just half an hour to “bury” the useful Sassuolo 3-0, eventually winning 3-1.

As Juventus prepare for their opening Champions League game, at home to Sevilla, winners of the last three editions of the Europa League, they could hardly look better. Which is just as well because the last time they played in Seville, in a December 2015 Champions League group game, they lost 1-0, in a defeat which “earned” them a second round clash and subsequent elimination by Bayern Munich.

Reassuringly for Juventus, the all-Argentine Paulo Dybala-Gonzalo Higuain combination up front is beginning to function. Higuain is already on the three goal mark. There may be many more to come. Oh, and by the way, Juventus are already on top of Serie A, two points clear of their closest rivals…and that is after just three games.