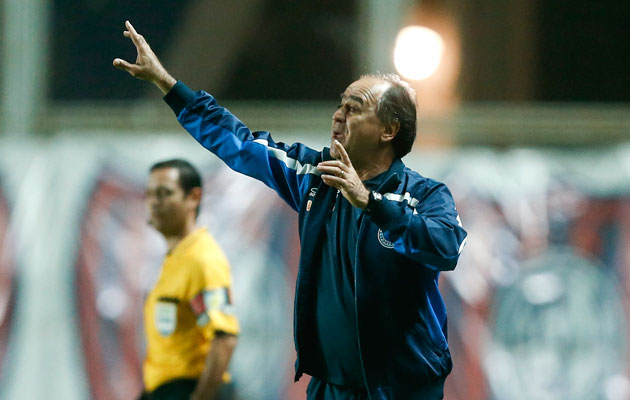 World Soccer: You’ve managed Cruzeiro for almost two years now, which seems an age in Brazil, where coaches are hired and fired with bewildering haste. What is the secret behind your success?
Marcelo Oliveira: Success in football is never for one reason only. It’s a combination of things. When
we arrived we got rid of some players and brought in others who we believed could develop here, like Everton Ribeiro and Ricardo Goulart. The coaching staff at Cruzeiro is extremely dedicated, and the infrastructure and facilities of the club, which are really impressive, help a lot.

We try to create a healthy working environment by telling the players how lucky they are to play here, to do something they enjoy, and to earn a lot of money, compared to most Brazilians.

Many leading Brazilian coaches tend to adopt a domineering, “alpha male” approach. But you seem to have a quieter, more thoughtful style…
I think every leadership style can be successful. Tele Santana [his boss when playing for Atletico Mineiro, and coach of Brazil’s 1982 and 1986 World Cup squads] didn’t raise his voice much either, but he demanded a lot from us in training.

As a coach, I treat the players the way I’d like to be treated myself, with respect. And it’s important to be consistent. There are 30 players in the squad at Cruzeiro and at some stage somebody will be unhappy because he’s not playing. But if he understands there’s consistency to the selection process he’ll accept the decision and try harder to win back his place.

After the World Cup, some questioned the style of not just the national team but also the way the domestic game is played. Yet you have Cruzeiro playing a passing game based on speed. Where did this approach come from?
It’s a philosophy. I believe that if you don’t mark properly, you’ll lose. So I try to get as many players as possible to press the opposition. Marking is about organisation, positioning and desire. If you couple that with a lot of technically gifted players, when you win the ball the outcome will generally be positive. We tell all our midfielders both to get into the opponent’s box as much as possible and to track back when we lose the ball.

Who or what has most influenced your theories on the game?
Tele Santana was a major influence. His insistence on technique – on the fundamentals, like passing and working as a team – made a big impression. When you watch the best teams, like Barcelona and Bayern Munich, they play in a very simple way, with quick, short passing and the ball moving from player to player. It’s much less complicated than trying to dribble past players.

What are some of the frustrations of being a coach in Brazil?
You’ve said I’ve been at Cruzeiro for almost two years, which for Brazil is seen as a long time. But it shouldn’t be. A coach has to have two or three years to work so he can instil continuity and create a footballing philosophy. But in Brazil it all depends on results. If they don’t come, the manager will be under pressure.

Where does this pressure come from? The media, the fans or the directors?
Directors who are at a club because of their egos or for political motives will always listen to the fans. They can’t sack 10 players, so they get rid of the coach, which only fixes things temporarily. Clubs don’t have a consistent approach to the game here because every three or four months they change everything: their philosophy, their physical preparation, their style of play.

Does the overcrowded fixture calendar make life difficult?
Brazilian managers don’t have time to coach. And if you don’t coach, you’re going to end up with poor-quality football. Last year we played over 60 games and this year we’re going to play more than 70, with the World Cup break in the middle of the season. So we’ll be playing a game every three days. Where are the opportunities to coach? The games become our training sessions. And after every round of fixtures another important player is injured. Something has to change.

How might that come about?
When those who are directly affected by the problems – the players and the coaches, for example – do something about it. When things are left up to the directors it’s more difficult because there are financial considerations, and TV and the governing bodies get involved and there’s less chance of change.

There seems to be a lack of young coaches coming through in Brazil, and even those that do well end up being hired and fired so often that their confidence suffers…
One thing leads to another. Moving from club to club doesn’t allow coaches to grow. I try to use my own personal experiences at the end of every season to improve myself, asking what went well and what we can improve. But by the time December comes around you’re exhausted, because of the pressure. Often you sleep badly or you don’t sleep enough.

Do the domestic game’s problems have a negative effect on the national team?
Of course. Dunga can’t select more than two players from each team [the Brazilian fixture calendar means clubs play matches on or around FIFA international dates]. And the national team takes players away from clubs at vital moments. So the sides that do well are invariably punished because they play more, get tired and lose more players to international duty.