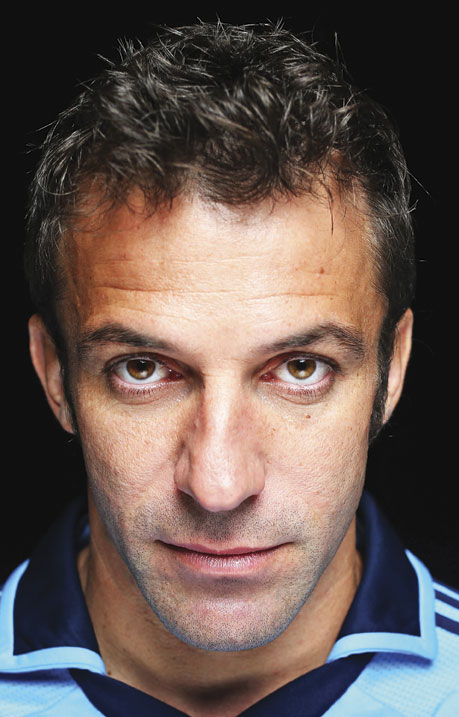 World Soccer: When you left Juventus in September, why did you join Sydney rather than one of the other teams who wanted to sign you?

Alessandro Del Piero: I had other opportunities, both in Italy and abroad, but I chose Sydney with my head as well as with my heart. People here really wanted me, giving me the opportunity to play in a growing reality and to build something which goes beyond football. I did not want to relive the same experiences as before. In my career I have already won everything so I have nothing to prove – which is why I needed a totally new challenge.

What do you make of Australia?

It’s quite early to say something definitive, but I can say that, for now, everything is excellent, both for myself and my family. Sydney is beautiful, we’re enjoying living in a new country with the ability to discover new things in life. For a sportsman like me, Australia is a terrestrial paradise. The culture of sport is part of everyday life.

What do you think about the standard of Australian football?

The A-League is more physical than Serie A. All the teams are physically strong and, tactically, they are improving very quickly. Here at Sydney FC, we didn’t have a great start, but there are a lot of youngsters in the team so they need time to acclimatise. People in Australia are passionate about football, they come to the stadiums with a lot of enthusiasm. In all the stadiums, the fans have welcomed me magnificently and that is a great feeling for me.

How do you get on with your new club coach Frank Farina, who replaced Ian Crook at the end of November?

For now, I know about him more from his past exploits as a manager with the national team. But we will have plenty of time to get to know each other better in the coming months.

How hard was it to move from Padova to Juve at the start of your career?

The most difficult problem to face was not professionally but personally. I came from a little town in Veneto and at 19 I was in a big city like Turin. In Padua I lived only one hour by car from my parents’ house, while at Juventus I had more responsibilities and I was on my own. I had no problems on the pitch. I was a little bit reckless probably, but I believed in myself and I was sure that I had the ability to become a great player. All the players at Juventus helped me and I learned what it meant to be a Juventus player.

Who were the best team you played against while at Juventus?

During my years at Juventus I faced a lot of great teams, but I can say that on many occasions we were the best team! On the European front, Barcelona managed by Pep Guardiola really impressed me and that is the team which, hypothetically, it would have been great to play with.

Which of your past team-mates do you consider to be the best?

It’s very difficult to make a list as I played with many wonderful players, both with Juventus and the national team. But, if I have to mention only one player, I would say Zinedine Zidane. The Frenchman was skilful and technically supreme, and he was very passionate on the pitch. He is also one of my best friends.

You scored a club record 290 times for Juventus. Do you cherish any one goal in particular?

No, not one in particular. I remember all the goals that I scored in 1994 and 1995. And especially the goals scored in the 1995-96 Champions League campaign that helped Juventus back to the top in Europe and to win an incredible Final against Ajax in Rome.

Which particular game would you consider to be your best ever?

If I had to choose one with Juventus, I would say the 1996 World Club Cup Final played in Tokyo against River Plate. That was the icing on the cake for a team that had won, in two years, the Scudetto, the Italian Cup and Super Cup, the European Super Cup and the Champions League.

It was a tough match, very difficult for both teams, and I scored the decisive goal minutes from the end. Absolutely unbelievable. With Italy, I would choose the 2006 World Cup semi-final against Germany in Dortmund. I scored our second goal in extra time and I remember the succession of emotions throughout the match. After Dortmund, we were sure we had a chance of winning the Cup.

You did win the World Cup with Italy that year, but you were also relegated with Juventus. What do you recall of the season spent playing in Serie B?

The choice to stay at Juventus in Serie B was not even a choice in the sense that I never gave myself an alternative. My goal at the time was to bring Juventus back to Serie A, and I faced that challenge with the same enthusiasm and desire as winning a Champions League or a World Cup Final.

Do you consider Juventus to have won 28 or 30 Serie A titles? Do you think people in Italy will ever stop talking about Calciopoli?

All our opponents know how strong that Juventus team was. We won all the Scudetti on the pitch, no question about it. I don’t know how long we will continue to talk about Calciopoli in Italy but, to be frank, I am not particularly interested in the subject. We won those Scudetti. That’s good enough for me.

What about after Sydney? Do you want to become a coach or is there a possibility you could leave football?

I am still a footballer and I have not started thinking about what I will do in the future. One thing is certain, and I think I have already proved it, I am not afraid of change. I observe with great interest and curiosity everything which surrounds me.