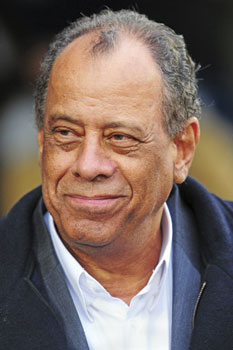 World Soccer: Are Brazil favourites to win the Copa America?

What is the main difference between this team, coached by Mano Menezes, and the previous one, led by Dunga, that failed at the last World Cup?

The difference I see is the happiness of the players. When they arrive for games now they are not with “closed faces” anymore. They smile, they talk to people, they talk to the press. I can say the players are happy again to play for the national team.

Is it better to go with new talent or with experience? What will Menezes do?

The best way is to mix experience and talent. This is what Menezes is trying to do, calling up experienced and also new players for the friendly games. I am very confident that we are going to have a very good team very soon.

Does this Brazil team need a strong centre-forward – like Ronaldo was?

No. We don’t have one because Ronaldo is one of the best players ever in Brazil – like Pele and Zico – and it would be very difficult to find another one like Ronaldo.

Which Brazil players are you looking forward to seeing at the Copa America?

Let’s hope Paulo Henrique Ganso will be there and not injured. In my opinion he is the best player in Brazil today.

Who will offer Brazil’s biggest challenge?

Always, always, Argentina are our main opponents. They have very good players, they play very strong football. Again the title will be between Brazil and Argentina.

Why does Lionel Messi not play as well for Argentina as he does for Barcelona?

I don’t know – maybe the quality of his team-mates at Barcelona is better than for Argentina – but in my opinion he is the best player in the world today. He is showing this playing for Barcelona, doing his best for his club, but unfortunately for the Argentinian people he is not the same when he plays for their national team.

Is it fair to compare him with Diego Maradona or is that a bit too much?

No, I don’t see how you can compare, at least not today. After Pele, Maradona for me was the best.

And what about Argentina players such as Gonzalo Higuain, Angel Di Maria and Javier Mascherano? Are they as good as the Brazilians?

They are very good players. They have very good talent. Because we are Latin people, we share a South American style. So, Higuain, Di Maria – I like Di Maria, a very good dribbler – you can compare them with some Brazilian players.

Uruguay did better than both Brazil and Argentina in reaching the semi-finals of the last World Cup? With Diego Forlan and Luis Suarez, can they be a threat and challenge for the Copa America?

Yes, for sure they can challenge our teams, but I don’t feel that Uruguay will be in the Final of the South American competition.

You grew up with Pele at Santos. How does the club produce so many talented players, such as Robinho and Neymar recently? Is there a secret formula?

Santos has a very good centre for young players. The club has an advantage as they go to Santos and stay playing for Santos. They don’t go, for example, today to Santos, tomorrow to Sao Paulo, because they are down there on the beach. The kids in Sao Paulo [the city], they try Sao Paulo [the club], Palmeiras and Corinthians. If they don’t stay, for example, at Corinthians, they go and try out at another club. At Santos, no, because the only team in the city is Santos. This is why Santos is like a factory for producing good players.

Well, at that time we played more technically. It looks like the players before were more intelligent. This was football before. Today they run a lot. Messi, he could have played very well in our time, but he plays very well today.

You have coached in Nigeria, Oman and Azerbaijan. Is it harder to coach or play?

It is harder to be a coach. A player is lucky because he turns up, he practises, and after one hour – two hours maximum – he takes a shower, goes home and comes back the next day. The coach, after the practice, has to sit and think all day and the next day.

The best team in the world today I consider to be Barcelona. The way the play, they seem happy to play football. They move all the time, touching the ball very well. The best teams I played in were the 1970 Brazil and Santos sides, with Pele, Coutinho, Pepe, Mauro, Gilmar and Zito. Wonderful teams and I had the chance to play in them.

And one final question: who is going to win the Copa America?

I don’t know. But I hope Brazil win!