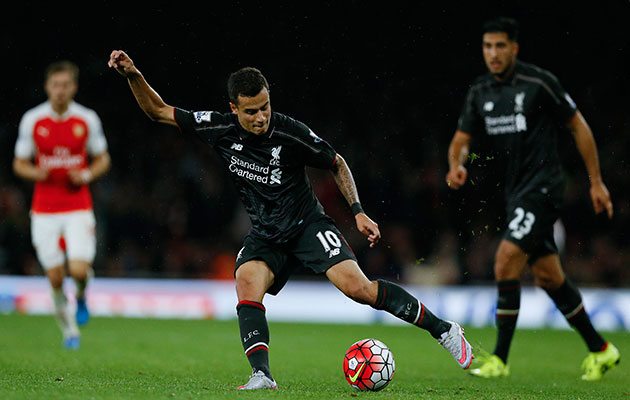 World Soccer: Jurgen Klopp combined winning trophies with breathtaking football at Borussia Dortmund. How significant is it to your trophy ambitions to have him here at Liverpool?
Philppe Coutinho: He created a highly successful side at Dortmund and it is great for Liverpool to have him. In training, we are working hard and enjoying his methods, which are helping to make us better players.

Little by little, it is translating to matches and I think everyone has seen how effective his [gegenpressing] philosophy can be if we adapt it in the right way. It feels like we are moving in the right direction under him and we believe we can fight for the big prizes and enjoy some special moments with the fans.

What influence has Klopp had on you in his time at Liverpool?
Our team is playing a high-pressing game and I am enjoying it. With this style there is more freedom when we have the ball. We still have responsibilities within the team, but the manager is asking us to play our game more naturally and it is enabling us to express ourselves. Klopp has put his ideas forward and they are helping to make me an even better player.

I have been lucky to work under some fine managers already in my career and they have each added an element to my game. The likes of Benitez, Pochettino and Dunga are great coaches, but I will always have a special gratitude to Brendan [Rodgers]. He believed in me and brought me here. He gave me the opportunity to play for such a great club.

How important is your understanding with Roberto Firmino?
Our understanding is improving and I am learning more and more about the way he likes to play, as well as his movement off the ball. Hopefully that can be beneficial to both Liverpool and Brazil. He’s a great player who brings a lot of quality into the squad, but it is not just about two players and a partnership. The whole squad is working to improve as our main objective is to win trophies as a unit.

English clubs haven’t always taken the Europa League seriously, but now that the likes of Manchester United, Sevilla and Borussia Dortmund are involved, is it more appealing as a player?
You always want to test yourself against the best and there are some strong teams in the competition now, but that doesn’t affect it as a target. Maybe that makes it more attractive to the fans, but for the players it was always something we wanted to take very seriously. The manager has emphasised that the Europa League represents a great opportunity for us and we are very focused on going as far in the competition as we can.

You’ve had some big moments in the past 18 months. What has been the highlight?
It is true that I have had some great moments, but I cannot rest, I always want more. I am driven to keep developing and improving. It was great to play at my first major tournament for Brazil, at last summer’s Copa.

It didn’t turn out as we would have hoped, but it was a huge learning curve for me to play and train with the best Brazilian players of the moment. I was also nominated for awards and named in the Premier League team of the year, but I want more than that.

Do you feel the national side has seen the best of you yet?
I know I need to improve a lot and there is so much more I want to show and achieve with the national team. I am driven to keep improving and I am working hard to be the best I can be. If I keep developing and working on my game I hope that over the next few years I can serve my country as a great player and make some big contributions.

You have said that you were angry at not being involved in the 2014 World Cup. Does that spur you on?
Of course. Every player wants to play in a World Cup and unfortunately I was not involved. It was sad the way it turned out for Brazil in our home World Cup. It was disappointing for the players who were involved but we must look forward. It still remains my dream to play in a World Cup. It’s definitely one of my major goals.

Does one day playing in La Liga – like your idol Ronaldinho and your good friend Neymar – interest you?
I just like to live in the moment. I am not looking ahead. Being here at Liverpool is a dream come true. I am already playing in the best league in the world and I have a number of years left on my contract that I only renewed last year. I am very happy and my focus is on helping Liverpool fight for trophies.

You played at various age levels with Neymar. Just how good is he and do you expect him to succeed Lionel Messi as the best player in the world one day?
Without a doubt. He’s already among the three best players in the world, alongside Messi and Cristiano Ronaldo. Everyone can see his qualities. He just keeps getting better and better. With every game he is able to express more and more of his natural gift.

I always knew he was set for greatness. In the youth teams you could see he was special. We used to joke with him that he’d be the best in the world. It is not a surprise to any of us now because you could tell he was different.

Neymar said he’d like to see you at Barca…It’s flattering.
It’s great to hear this from someone who is not just a friend but is also one of the best players on the planet. Nobody knows what will happen in the future but, like I said, I’m happy at Liverpool and am really enjoying the moment.