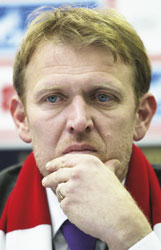 World Soccer: You have had a few months to assess the Red Star squad. What do you make of it?

Robert Prosinecki: Basically I am happy, but we’ll see what happens. With football everything is possible – which is what makes it such an interesting sport.

What are your goals for the club?

I think that Red Star is one of the biggest clubs in Serbia and Red Star must always achieve good results. Of course, I cannot promise we will finish first – no coach could do that at any club – but we will do everything we can.

Do you have a clear philosophy on how football should be played?

We have a great tradition here and I aim to play an attacking game, to be dominant. Our game must always be based on that. You can’t hope to attack the goal, to make chances, to make things happen, without control of the ball. That’s normal. The fans expect it and it’s normal they should expect it. In Montenegro [during the mid-season break] we worked well, especially in terms of fitness. There were one or two technical things, so the players won’t have an easy job because some things have been changed. But I hope we can show the benefit of those changes.

What are the changes you have made?

I will give you a very simple example. In the first half of the season we played a different system. I insist on 4-3-3, which they did not play up until now. That is the system I would like to play, but sometimes you cannot play in that way if you don’t have the right players. However, I do believe that at this stage we do have quality players who can play 4-3-3.

I think the best teams that ever played used 4-3-3. Look at Barcelona. I think it’s impossible that a team ever played like Barcelona before. I don’t think there are any of us when we watch Barcelona who don’t like to see such a game. All of us want to watch them. They are dominant in every game. Of course, Inter beat them with Mourinho, but generally they win. It is, of course, very difficult to play like this, but we are keen to try. In home games, at the Marakana, we have to dominate, make our fans happy and win. But we want to win and also play in a good way.

Was your love of 4-3-3 inspired by your time playing at Barcelona?

From the time of Cruyff. For a long period they have picked the type of players who can play this way and that’s how it was in my time there. They can afford to buy these players, of course, and by playing this way they create a great opportunity to play attacking football.

Pep Guardiola, a former team-mate, has carried Johan Cruyff’s philosophy into his own coaching career at Barcelona. Have you had much contact with him since you became a coach?

He is my friend. I played two years together with him at Barcelona. I talked to him about this because he’s a true child of Barcelona. He said he’d had good luck to have great players who could play this way and they’d had good luck to take players of that quality from their own youth ranks, who knew how to play that way. Of course, it’s not only luck, it’s long years of work to develop that sort of player.

What lessons can you learn from your time as a Red Star player? Did the change of coach, from Dragoslav Sekularac to Ljupko Petrovic, make a difference to the 1990-91 season?

Ljupko Petrovic brought something new, some new spirit. He instilled in us that we had quality, that we could do something. He made us believe and he made us more assertive in a sporting sense. He persuaded us we could achieve big things. One of the most important aspects of a coach is not only to get the tactics right, to choose 4-4-2 or 4-3-3, but to make the players believe they are capable of achieving something. Ljupko Petrovic did that and, with the exception of that final game [against Marseille in the 1991 European Cup Final] when we were more cautious, we were usually the dominant team that season. We won the league, were unlucky runners-up in the [Yugoslav] Cup and won the European Cup. Even after many players left we won the World Club Cup Final in Japan.

One of the cliches of football is that you should never go back. Is it a risk for you to go back to Red Star?

I think it’s a good cliche, it makes sense, but there are some differences. I’m not coming back as a player, I’m back as a coach. It’s a big change, of course, and coaching Red Star is a big, big challenge. I’m very keen. My time here as a player is a big burden in a way, but I will try to do something positive as a coach. If it’s good that I come back or not, only time will tell.

Were you actively seeking a job in coaching or did you feel you had to answer Red Star’s call?

I wanted to come back, but I had a moral obligation to talk it over with my family. I wanted to make my career as a coach and thought carefully about it, and then came this offer. I know this club very well, which is a big advantage. I worked here for four years as a player, so it is not something new. I know some old players around the club and the fans remember me.