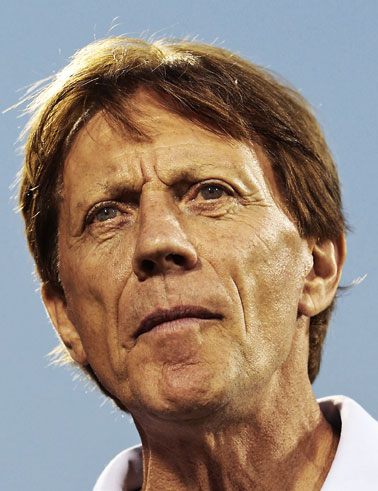 World Soccer: From reaching the final round of World Cup qualifying to being embroiled in a match-fixing scandal, football in Lebanon has experienced some dramatic highs and lows of late…

Theo Bucker: This is what happened in brief. Over the period of the past 40 years Lebanon was in a dark tunnel. Nothing happened. Roughly two years ago I took over to do my friend, the general secretary of the federation, a favour. He asked me to help get Lebanon through qualification. We lost the first match 6-0, but this was normal for the Lebanon national team. Then we suddenly started producing astonishing performances and very good results. This was happening only because of me. The team and I worked closely together, everybody was listening to me. We all believed in each other and everything was fine. After these good results the board, the federation, everybody wanted to get the credit. And then we started to fight and the players stopped getting paid.

Do you think players not getting paid is what led to match fixing?

There was no other club, no other team, no other nation coming to our players and giving them money to lose. A couple of players were selling matches to a betting company. That’s it. There has been an investigation and as a result the federation has suspended 24 players.

One of the matches under suspicion is the World Cup qualifier against Qatar. How do you feel?

I feel very, very bad. I feel very, very sad. There were players selling matches who I really trusted. I never expected them to do this. And now everything is broken. If the federation wants to continue, we have to start from the beginning again.

There was no hint of any problems last year. What changed?

The one possible change is that the young players had been doing this for a long time without us knowing. When our success came they wanted more money, expected more and found they could get more. So it was just greediness.

When did you suspect that something was wrong?

The first match against Qatar [last June] when our defender Ramez Dayoub was playing weird. I checked the match afterwards and three or four times he tried to play very stupid back passes in the direction of an opposition forward. Finally he was successful [Qatar scored and won 1-0]. Everybody was astonished. But no one could come close to the idea that he could do it on purpose. This was the first thing. Then we played the Arab Nations Cup in Jeddah, in July, and for a couple of matches we were clearly the better team. And then we lost [because of] very individual mistakes.

What proof have you seen that players took money?

The proof is that some of the players were living a life they could simply not afford on their normal salaries. If you are getting US$1,500 you are not able to buy a big BMW. You don’t have two wives, five kids, two houses. They always had the best mobile phone and the best clothes. Since we know they didn’t break into a bank, the money must have come from somewhere.

You have said that your wife was the first person to notice something was wrong at the Qatar match?

My wife was the first person to find out because she has a very sharp eye and she understands football. [Dayoub ] tried to do it several times and tried to play this pass. Then we checked the video.

Maybe the federation should give your wife a job?

[Laughs] It’s enough that she is a kind of assistant to me!

How does Lebanese football solve a problem like this?

In this situation we can only do one thing. The federation must make a very clear statement saying that we know in the past that players have done things to affect results. They must say we support the coach, we put him in this position. Or I’ll resign.

The allegations are devastating when you consider how much faith the Lebanese people put in the team, putting aside political and religious differences…

I’m still trying to find the right expression and the right words. I’m really speechless. They [the accused players] can deny it all they want, but other managers were listening in the dressing-room toilet before a match in Jeddah. Two of our players were talking to the goalkeeper because they wanted him to leave the match [get sent off].

On April 4 we have Thailand in the Asian cup [qualifiers] and then we have Uzbekistan. I have to choose a whole new team with new players.

Do you feel that qualification for the World Cup finals is the only thing that could save Lebanese football?

We should not look only for qualification. I started with the idea to bring the level of football up a little bit, to stabilise it. There is no point going up like a shot and then falling down again. We have to work together. I am the only professional in the country. They have to be convinced by what I am saying.

Where do you think you will be in three months time?

I really do not know. Maybe I’ll be coach of the team, maybe I’ll stay at home, maybe I’ll coach another team. It depends on the federation.