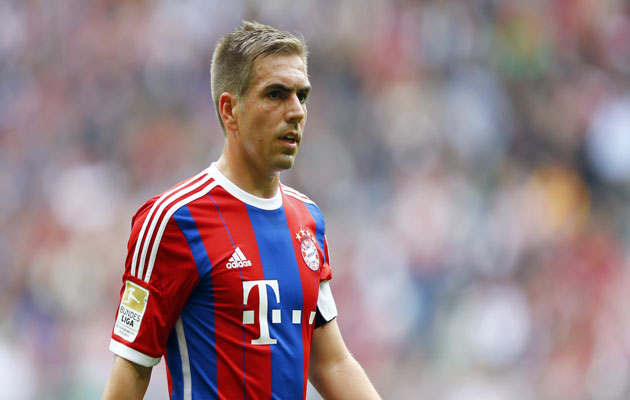 World Soccer: You were out of action after fracturing your right ankle. Did you watch Bayern games during that time through the eyes of a fan or a coach?
Phillip Lahm: It’s a mix of everything. You can be thrilled like a fan and at the same time you can share the coach’s perspective because I know how Pep Guardiola thinks. I reflect on what we can do better. Compared to pitch level, you see situations differently from the outside. You see the whole field, the open spaces.

What did you make of Bayern’s form during your absence?
Very positive. It’s been good to take a step back and have a look at the team. You can enjoy it. We’re playing very good, attractive football. As for the problems we had in Wolfsburg [where Bayern lost 4-1 in January], they have been taken care of.

Preventing goals on the counter has been a big issue. How do you fix this problem?
Basically there’s no problem here. It’s just a matter of how the team and the individual players react after losing the ball. The way we defend, by looking to win back the ball as quickly as possible, can leave us vulnerable if we don’t do it correctly.

Could this style of play be too much of a risk in big games?
If everybody does their job, we will not give up many scoring opportunities and we will always be in the opposition half. When we get it right, it’s hard to live with us. We put the other side under pressure and make it difficult for them to find solutions.

Can Bayern play a midfield of experienced campaigners such as Xabi Alonso, Bastian Schweinsteiger and yourself?
Never say never, but I find it difficult to imagine such a midfield. The game has changed. Full-backs, midfielders and attacking wide men are all, by and large, similar types of player. Even if the strength of Arjen Robben or Franck Ribery is in one-on-ones, everyone is technically accomplished. We still have the centre-backs and the strikers, but as for the rest, they tend to be very similar: all rather small technical guys with good passing ability.

With the full-backs heavily engaged at Bayern, does it make any difference if you play at right-back or in midfield?
It depends. As a full-back today I spend more time in midfield when we’re in possession. Defensively it’s a bigger difference.

Is the development of players who largely resemble one another a step forward or a counter-productive phenomenon that results in players losing their individuality?
It’s a big advantage because it means more options. We still have the individualists; if not, we wouldn’t have Robben and Ribery in the team. This type of player, who dribble and make the difference, will continue to be very important. But it’s also necessary to have players who are tactically switched on.

Guardiola stands for permanent change in personnel, systems and positions. Is there a danger that in a big game the team is not 100 per cent rehearsed and ready?
No, because we work on such things every day. Everybody knows what we must do as a team.

You are part of an exceptional squad, but bearing in mind the ages of some of the players, Guardiola’s Bayern don’t have long to win the Champions League again…
I think we’ve at least two years left at the absolute top level.

Would Guardiola be prepared to wait a long time for another European title?
I don’t know. He has a contract until 2016. I don’t think he’ll be going soon. I hope he stays with us beyond 2016. But his way of working is very intense. The club and everyone here is completely satisfied with him, without question.

You have had a remarkable career. How long do you want to go on?
Up to 2018. My contract runs out that year. I’ll be 34 and it definitely will be the end.

You retired from international football after the World Cup triumph in Brazil. Were you no longer able to put up with the continuous pressure?
Not at all. Everything, at some point or another, comes to end. I had many super years with Germany but I wanted to be sure I continued to play to my maximum in my last four years with Bayern. With national team games, it would have become too much. In the last nine years I was never injured and as captain of club and country that took up a lot of energy.

Both homegrown players like yourself and overseas stars such as Ribery and Robben clearly identify with Bayern. Is this one of the reasons for the team’s strength?
Where else would you go? We play for a top European side, who each year compete for the Bundesliga title and the Champions League. Where else could you get this complete package? Then there’s the specific nature of the club: the family-like aspect, the pride, the modern organisation with tradition. Everyone would love to sign a long contract here.

Would an extrovert superstar such as Zlatan Ibrahimovic fit in at Bayern?
Irrespective of their names, we could absorb a character like Ibrahimovic.

It always used to be said Bayern must sign two or three top-quality players every year. Does that still apply?
Maybe so, but at the moment I don’t see the need.