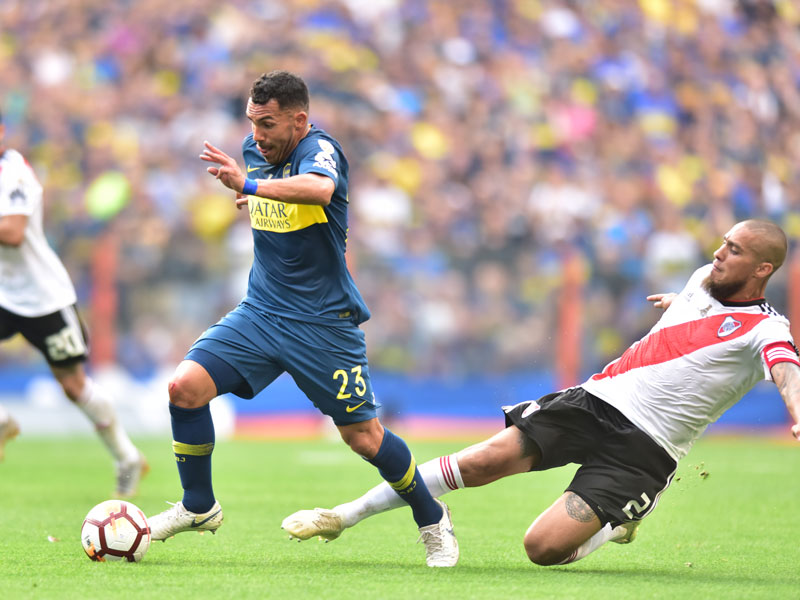 If the first leg of the Copa Libertadores final was a much better game than had been generally expected, then some of the credit has to go to the coaches.

The widespread fear was that the importance of the occasion – the biggest ever clash in one of football’s fiercest rivalries – would prove intimidating. Not wanting to lose would prove a greater incentive than running the risks needed to win.

All of this may apply to the second leg, when River Plate host Boca Juniors on Saturday 24th. But the first leg was a pulsating affair. The atmosphere and the drama were guaranteed. The attacking intensions came as an added extra.

Perhaps the man most responsible for this was River coach Marcelo Gallardo. Serving a suspension, and banned from the stadium, his work had to be done in the build up to the game. And he seized the initiative by sending his side out with a couple of surprises; he went with three centre backs, and the idea of a high midfield block; and he used Gonzalo Martinez in a central role, rather than his usual post wide on the left. Boca had not seen it coming. They were pushed back and pulled around.

Boca’s coach Guillermo Barros Schelotto probably had a slice of luck when his star winger Claudio Pavon limped off after 25 minutes. It forced him into a reorganisation. River had ensured that Boca’s 4-3-3, with two wingers, was too stretched out. Schelotto took advantage of an enforced change to tweak his team into something more compact, and was soon rewarded with the opening goal.

Action and reaction. Ebbs and flows. It was the story of the game. Once Boca had threatened a stranglehold, River came off their three centre backs, moved higher and were immediately level at 2-2.

That is the way that it finished. But there was nearly a final twist – one for which Schelotto deserves some praise for what would seem to be a shrewd piece of man management.

One of his problems this year has been Carlos Tevez. Back for a third spell after an unhappy time in China, Tevez enjoys idol status at the club. On his return at the start of the year the local media were entirely straight faced when they asked about his dreams of making it into the World Cup squad. In truth, he was barely worth his place in the Boca starting line up. The team played a disappointing group phase. They seemed to be a hostage to the star status of Tevez. Schelotto started to lose patience.

The coach was in an awkward position. He and Tevez were team-mates, most notably in Boca’s 2003 Libertadores triumph. But with a strong squad – Mauro Zarate was added, along with Colombian winger Sebastian Villa, and Dario Benedetto was returning from an injury lay off – he had other options. Schelotto began to think in terms of a team without his former colleague.

Perhaps the last straw came in the 2-0 home defeat to River Plate in a league game on September 23rd. Tevez started, made little impression, and was substituted. He was not seen again in the Libertadores – in three successive matches Boca made all three substitutions without brining Tevez off the bench. But he came on for the last 20 minutes on Sunday – and very nearly won the game.

Schelotto had the wisdom to judge the situation well; Tevez is coming to the end. Being part of the side that beats River in the final is, Club World Cup aside, the last remaining dream. Let him be a part of it, treat him with importance, cajole him into getting into the best possible shape – all of this would help the old idol to be a positive figure in the group.

And Tevez looked sharper than he has been all year in his brief appearance – and came up one delightful turn and run, exchanging passes with Ramon Abila and then setting up Benedetto for the clearest chance of the match, which River keeper Franco Armani did very well to block.

And so scores are level as the countdown starts towards the second leg. Tevez will surely not start the return match. But, a big occasion player, he has been allowed to demonstrate that he could still play a role in defining the destiny of the 2018 Copa Libertadores.