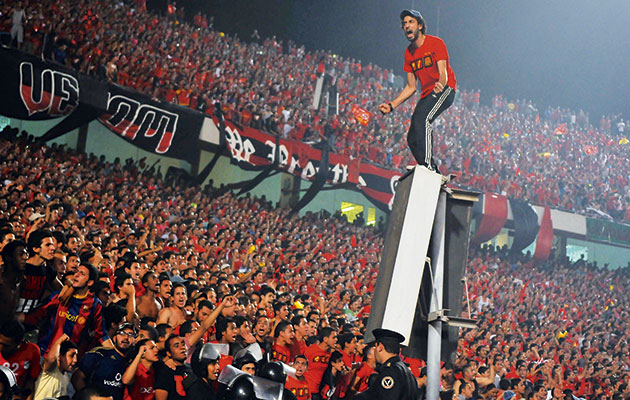 The futuristic Hazza Bin Zayed Stadium in the oasis city of Al Ain – 100 miles south of the UAE capital Abu Dhabi – hadn’t seen anything quite like it before.

The home of reigning UAE Arabian Gulf League champions Al Ain usually hosts crowds numbering in their hundreds. In fact, the arena had only once come anywhere near filling its 26,000 capacity, and that was when Manchester City – owned by a member of the Abu Dhabi royal family and festooned with star names – were welcomed with open arms as they played there to mark the stadium’s opening.

But on October 15, 2015, the Hazza Bin Zayed Stadium could have been filled at least four times over. And the reception was far from friendly.

One half of the stadium was coloured red, the other white, for the season-opening Egyptian Super Cup between Al Ahly and Zamalek, in the latest instalment of the Cairo derby. Between them, the two clubs have won the Egyptian league title 49 times, with Ahly winning 37 to Zamalek’s 12, while in Africa Ahly have won the continent’s Champions League a record eight times to Zamalek’s five.

Egyptian football – indeed, Cairene society itself – has long been defined by your colour and your team. It is a rivalry that in many ways transcends football; throwing class, colonial politics, nationalism and religion into a combustible mix.

It is Africa’s biggest match and over 100,000 people would cram into the Cairo International Stadium to see the action live, while the city’s perpetually teeming streets would pause for 90 minutes. Violence would often flare and players on both sides would be hounded by the opposition’s fans over goals and perceived slights for years afterwards. Such was the mistrust that foreign referees had to be brought in to ensure, in a city where you were either the red of Ahly or the white of Zamalek, bias could be eliminated.

Yet it has been almost five years since the two African giants have met in such circumstances in Cairo.

Following the 2011 revolution that toppled former president Hosni Mubarak – in a revolution where the ultras of both clubs stood together on the barricades – Egyptian football has been rocked by a series of tragedies that threatened to irrevocably change the game and the derby. Among the most infamous of these was the killing of 72 Ahly fans after a 2012 league match in Port Said and the death of over 20 Zamalek supporters during a crush outside a stadium earlier this year. Football in Egypt is now a game enjoyed only on TV, played behind closed doors. 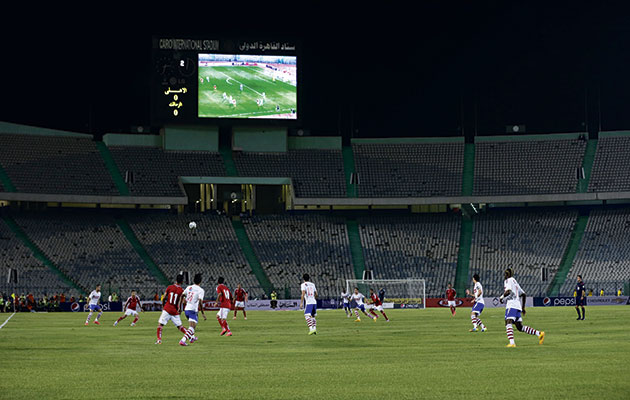 But this year’s Super Cup was played in the UAE – a country where a 300,000 strong Egyptian expat population live – and for 90 minutes Africa’s greatest rivalry was reignited.

Ahly began life in 1907 as the first Egyptian-run club. Back then, the country was effectively controlled by the British and French, who had interests in the Suez Canal. The name translates as “the national” in Arabic and the club was seen as a nationalistic symbol against what it regarded as foreign occupation.

Four years later, Zamalek were formed, with a Belgian president, and the team was set up without any restrictions on who could join or support it – be they colonialists, poets or middle-class shopkeepers. The team has had several names, and was briefly named after King Farouk before being changed, following his abdication in the aftermath of the 1952 Egyptian Revolution, to Zamalek – after the island in the Nile on which the club can be found.

While Ahly were seen as an Arab, nationalist, Muslim side, Zamalek were viewed as a mixed team – and it is a division that still drives the derby today.

“Fifty years ago, Ahly became the team of the devout, but Zamalek was the team of the middle classes,” explained former Egypt international and Zamalek legend Ayman Younes, who tasted the hatred
first hand, having scored a hatful of goals against Ahly – which still upsets their fans, even today.

“If I go to the stadium today. I still have to go without my car as they break everything,” he said. “I had a lot of problems with Ahly fans. In 1990 I found my BMW car on its side and they signed it ‘Ahly fans’. And that was when we lost, 2–0, but they remembered that I scored in the first game earlier in the season.”

Younes also recalled an occasion when 5,000 Ahly fans turned up at his house!

However, the derby changed forever in the aftermath of the 2011 revolution. The clubs’ ultras groups – Al Ahly’s Ahlawy and Zamalek’s Ultras White Knights (UWK) – played a hugely important role after uniting in Tahrir Square, with many Egyptian people considering them the “protectors” of the revolution for their success in fighting and subduing the police during those torrid and anarchic weeks.

But the fans paid a price and on February 1, 2012, 72 Ahly fans were killed when they were attacked by Al Masry fans after a match. What appeared at first to be fan violence later turned out to be something more sinister.

The prosecutor’s report later found collusion between Masry fans and the security forces, and dozens were jailed – with several even sentenced to death. The club and many of its players – including captain Mohamed Aboutrika, who held a dying fan in his arms in the dressing room at Port Said – considered the deaths to have been planned; a plot by the regime to punish the ultras for their role in the revolution.
The military, and later the government, denied their involvement.

“Supporting Al Ahly isn’t like just supporting a football club, it is like a religion,” said the club’s former captain Shady Mohamed shortly after Port Said, in an interview that took place in his home city of Alexandria, midway through a march held in honour of the Ahly fans who lost their lives.

He hadn’t played for Ahly for years, but still felt it was important to be there, commenting: “I had to come. Ahly never leaves you.”

The season was cancelled in the aftermath of Port Said and supporters were banned from Egypt’s stadiums for the foreseeable future. Last season some were allowed back, but a stampede outside one game – after the police could clearly be seen firing tear gas into the crowd – resulted in the deaths of over 20 Zamalek fans. But unlike after Port Said, there were no calls for justice.

The military had deposed president Mohamed Morsi, Egypt’s first truly democratic head of state, and he was later replaced by Abdel Fattah El Sisi, a military man. The ultras of the two clubs were now seen as potential fifth columnists. Instead of criticising the police in the aftermath of the tragedy, the president of Zamalek condemned the UWK as “traitors” after earlier branding them “terrorists”.

When this season’s league campaign began in October, Ahly beat El Gaish 1-0 in front of an empty stadium. But outside, thousands of Ahly fans gathered with flares and songs demanding to be let in. “Football is for fans,” they sang. “Open the doors, we are not terrorists.”

But the only place that the biggest rivalry in Egyptian football could once again be felt was thousands of miles away in Al Ain.

The Super Cup lived up to expectations, with Ahly coming from behind to beat Zamalek 3-2 – although not before the referee and his assistants left the pitch following a 22-man fight, which broke out after Ahly’s Ramadan Sobhi, the player earmarked as Aboutrika’s replacement, stood on the ball in a bizarre act of showboating.

After the final whistle, Zamalek fans could be seen crying. The Cairo derby may have paused, but the passion will always remain the same.