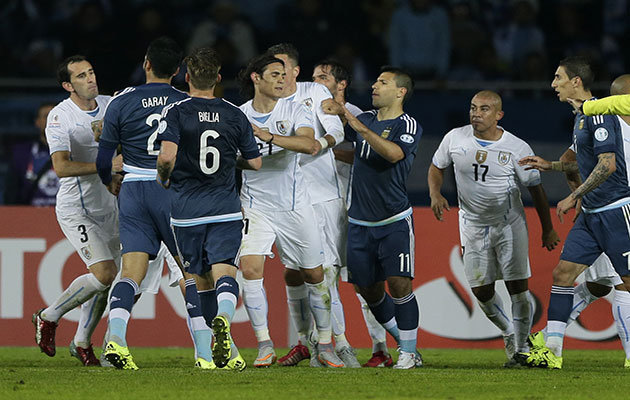 “It’s probably the most important derby in the world,” said Argentina coach Gerardo Martino before a friendly against Brazil last year. “Its significance lies in the history of the two teams and in the players they can choose from.”

Without doubt, Argentina against Brazil is something very special, a duel for bragging rights between neighbours and rivals who can claim to consistently to produce the game’s leading stars.

But Argentina have another local derby which, as well as present-day piquancy, has even more history.

Relative latecomers as a South American superpower, Brazil’s third place at the 1938 World Cup was the first real sign of what was to come. By then, however, the remote outpost of South America had already established itself as a leading centre of the game. It had established the first continental tournament and set off a fervour for football which led directly to the birth of the World Cup – which was first staged in South America, with the Final contested by two teams from the continent: hosts Uruguay and Argentina.

The rivalry between these two River Plate neighbours stands right at the heart of the growth of the game as a worldwide phenomenon. In many places, the game began as an elite pursuit and then permeated down through society – which is exactly what happened in Argentina and Uruguay. And at a time of mass immigration and rapid urbanisation, it happened with breathtaking speed.

In the course of barely a generation, River Plate football threw off its aristocratic, anglicised roots and became an issue of national importance, a mass sport fuelled by passion – and already giving signs of some of the problems that such emotion could bring.

An annual challenge match between teams from Buenos Aires and Montevideo, the two capitals, began in 1888. Set up by local British residents and staged on Queen Victoria’s birthday, the contests took place in an atmosphere of aristocratic chivalry. It was common for penalties to be struck wide on purpose in an acknowledgement that an opponent could not possible have intentionally committed a foul in the area.

But while some of this spirit lingered, by the time the second Copa America took place in 1917 the British influence had greatly diminished.

The FAs of Argentina and Uruguay were locally run, with the teams featuring local players, and in the last match of the tournament, with the trophy at stake, Uruguay were leading 1-0 with 20 minutes to go when their goalkeeper, Cayetano Saporiti, was injured in a clash with Argentina striker Alfredo Martins. Saporiti was unable to continue, and with no substitutions allowed, Uruguay were down to 10 men with an outfield player in goal. Martins offered to leave the field so that the numbers would be even, but Uruguay captain Jorge Pacheco insisted that he stayed, since the collision had been an accident.

In front of their own fans, Uruguay held on to win and successfully defended the title they had won a year earlier in the inaugural version of the competition in Argentina – an event which already pointed the way towards a more aggressive future.

The game at the Gimnasia y Esgrima ground in Buenos Aires a year earlier had attracted such a large crowd that spectators spilled onto the pitch. And when it became clear that the game would not take place, some of the crowd reacted by setting the stands on fire. The match was eventually played a day later at Racing’s stadium over the Matanza River in Avellaneda.

Held on an almost annual basis in the early years, the Copa led to a rapid rise in playing standards and the consolidation of a specific South American style: balletic and imaginative, ideal for the player with a low centre of gravity. The stakes of the Argentina-Uruguay rivalry were raised much higher when it became clear that this was much more than a local squabble – and world supremacy was on the table.

Uruguay effectively kick-started the game’s modern era when they turned up unheralded at the 1924 Olympics in Paris and cruised to the gold medal playing a brand of exuberant football that captured the European imagination. Back home, Argentina suffered a crisis of jealousy.

A home and away challenge against the Uruguayans was swiftly arranged. The sides drew 1-1 in Montevideo, but crowd encroachment meant that the return game in Buenos Aires could not go ahead as scheduled. It was played a few days later, by which time a giant fence had been erected to keep the fans off the pitch – a landmark moment in South American football. The home supporters satisfied themselves with throwing pebbles at the Uruguayans, who were beaten 2-1. One of the goals came direct from a corner, and to this day such an event is referred to in South America as an “Olympic goal”.

With the rivalry now fully up and running, Argentina also travelled to the 1928 Olympics in Amsterdam, where they ended up meeting Uruguay in the Final. Back on the other side of the Atlantic, huge crowds gathered in Buenos Aires and Montevideo to listen to loudspeakers relaying cables sent from Holland as Uruguay retained their title.

Capitalising on the interest in the game that the Olympic tournaments had generated, and recognising the need for a competition open to professionals as well as amateurs, the World Cup was born, with the inaugural version staged by Uruguay in 1930. The final was a River Plate affair, with the hosts overcoming Argentina 4-2, with as many as 15,000 Argentinians crossed the River Plate to be there. After the match the Uruguayan consulate in Buenos Aires was stoned. 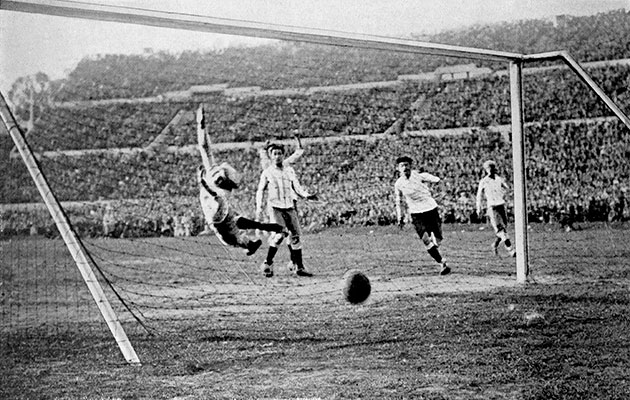 By now, as Ondino Viera – Uruguay’s coach at the 1966 World Cup – would later put it, there was validity in the idea that “other countries have their history, Uruguay has its football”. As the great Uruguayan writer Eduardo Galeano said: “The sky blue shirt was proof of the existence of the nation. Uruguay was not a mistake. Football had dragged the tiny country out of the shadows of universal anonymity.”
Even more than that, in both River Plate countries, football had proved a rallying point for the creation of an identity in lands largely comprised of recently arrived immigrants, chiefly from Italy and Spain.

The ethnic, linguistic and cultural proximities of the two countries makes the derby a little reminiscent of an England-Scotland game. And although there is no imperial history between the two countries, there is the aspect of a clash between big and little brother, in which the smaller can punch above its weight. And Uruguay have kept right on punching.

In 1947 Argentina overtook Uruguay as the nation with the most Copa America wins, but a country with a population of three-and-a-half million still refuses to bow down to one of 40m. Four years ago, in Argentina, Uruguay got their noses in front once more with a record 15th Copa America. As the players celebrated on the Buenos Aires pitch, they danced and sang that Uruguay were champions “just like the first time”.

It seems there are plenty of chapters still to be written in the old River Plate rivalry.