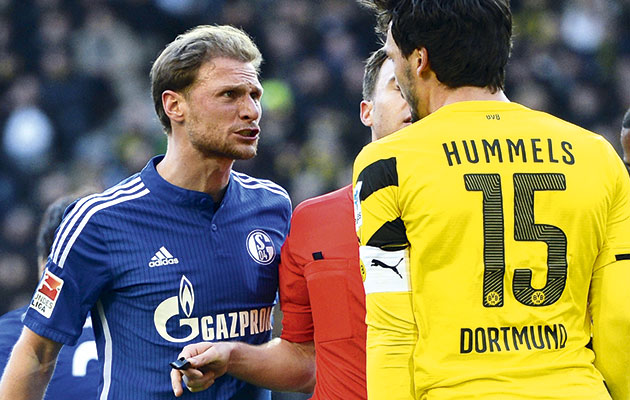 Separated by a mere 20 miles, the two big-hitters from western Germany’s former industrial heartland have been battling for local supremacy since 1925. And 90 years on, their encounters generate more heat and invective than ever.

Yellow-and-black in opposition to royal blue; the city of Dortmund against Gelsenkirchen; Ballspielverein Borussia Dortmund versus Schalke 04. No other derby in Germany electrifies and polarises as much the clash of the Ruhr powerhouses in the “Revierderby”.

No wonder Dortmund coach Thomas Tuchel and his players celebrated November’s 3-2 victory at home to their arch-rivals as though they had lifted a trophy. With so much local pride and identity at stake, every meeting between the pair is a pressure cooker of intensity in which defeat is simply not an option.

Whatever their team’s form of the moment, fans on both sides of the divide expect their favourites to approach the game in cocky, all-conquering mood – and heaven help anyone who tries to play down its significance.

Concerned by his team’s poor results of late, coupled with a lack of squad depth, Schalke boss Andre Breitenreiter made the mistake of describing the recent derby as a “bonus game”, a match in which his charges had nothing to lose.

He instantly found himself accused of surrendering. He will learn.

The main ingredient in the confrontational nature of the Ruhr face-off is the proximity of the two sets of supporters. They live together, work together and play together. At derby time, very few in the region remain neutral, and in the offices, factories and bars it is the only topic of conversation; an obsession that has gained further traction with the advent of social media.

Allegiances are hardcore and deadly serious, even to the point of some fans refusing to refer to the other side’s real location. Rather than talk of Dortmund, Schalke followers speak of “Ludenscheid-Nord”, which is in fact 25 miles away, while the BVB faithful prefer “Herne-West” (another old Ruhr mining town) to Gelsenkirchen.

Yet while Dortmund and Schalke fans would strenuously deny it, they are mirror images of each other. Both clubs boast huge and religiously loyal working-class fan-bases. Both have their roots in the area’s foundries, furnaces and mines. Both were initially built on the talents of Polish immigrant players. Both are devoted to a hard-running, all-action style of play. And both know that players who are not 100 per cent committed to the cause have no future at either club.

Both are also extremely successful. Although Schalke have never won the Bundesliga, they were the most potent force in the land during the inter-war years, claiming six national titles in that period. They also won the UEFA Cup in 1997 and latterly have regularly featured in the Champions League.

Apart from Dortmund’s conquest of the European Cup-winners Cup in 1966, the bulk of their achievements have been in the last two decades: five Bundesliga titles, the Champions League in 1997 and the World Club Cup the same year.

During the past 40 to 50 years, the rivalry has taken on a more virulent, uncompromising tone and there are two schools of thought as to why this should be. Some historians claim the bad blood was borne out of the 1971 match-fixing scandal, when many Schalke stars – among them German internationals Klaus Fischer, Klaus Fichtel and Reinhard Libuda – were banned for taking bribes. Half a lifetime later, older Dortmunder still call their rivals “FC Meineid 04” (FC Perjury).

Another theory is that the well was poisoned by Dortmund’s winning streak in the mid-1990s under coach Ottmar Hitzfeld, which saw the Gelsenkirchener grow increasingly envious of the huge popularity at home and abroad of such “Schwarz-Gelben” idols as Matthias Sammer, Jurgen Kohler and Karl-Heinz Riedle.

The story of the 168 competitive Ruhr derbies – comprising 68 Schalke wins, 59 Dortmund victories and 41 draws – is choc-full of folklore, unusual events, surprise headliners and one-upmanship: the 10-0 thumping Schalke handed out in October 1940; Dortmund’s first-ever derby triumph in October 1943; the sight, in September 1969, of tough-tackling Schalke defender Friedel Rausch being bitten on the backside by a police dog after spectators spilled onto the pitch; and Schalke goalkeeper Jens Lehmann somehow managing to head home a last-minute equaliser in a 2-2 draw in Dortmund in December 1997.

An equally memorable occasion was the penultimate round of the 2006-07 Bundesliga campaign when Dortmund’s 2-0 home win effectively put an end to Schalke’s title aspirations. Technically, the mid-table Dortmunder had nothing to play for that afternoon, but energised by thoughts of tripping up their foes, gave all they had and more. To the Yellow-and-Blacks, the spoils of the day and the commemorative “Schadenfreude” T-shirts; to Schalke the tears of frustration.

Strangely for such a tribal state of affairs, it has not been uncommon for players to switch camps. After exploding on the scene at Schalke in the 1960s, wing-wizard Libuda later enjoyed three excellent seasons at the Westfalenstadion; Lehmann was an outstanding servant for both clubs and so was attacking midfielder Andreas Moller, whose defection to Schalke in 2000 sent shockwaves through the Ruhr.

At first, dyed-in-the-wool Royal Blue fans would not accept Moller as one of their own, promising boycotts and organising petitions. However, they quickly changed their minds when he began to turn on the style and inspired them to within a whisker of the Bundesliga crown in 2001. From enemy to hero in one easy lesson.

That’s Dortmund and Schalke for you; love and hate.