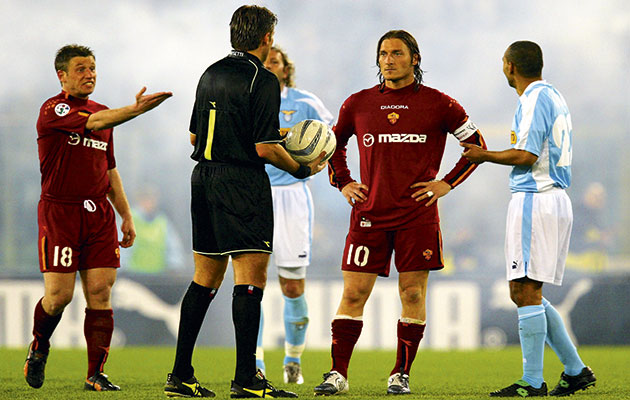 The Olympic Stadium, Rome, on the evening of March 21, 2004, minutes into the second half of a Lazio-Roma derby. Smoke flares have just been thrown onto the pitch, within seconds filling the stadium with such a dense smoke that it is temporarily impossible to play on.

In theory, fans from both clubs were protesting about the death of a child, allegedly run over by a police vehicle during pre-match skirmishes between fans and police. In reality, there had been no such fatality, but the rumour of the “death” spread like wildfire.

Not even seven announcements over the public-address system, pointing out that no one had died, could convince the sceptical fans.

At this point, amid huge confusion, at least three Roma ultras climbed the stadium barrier and made their way onto the edge of the pitch to talk to Roma captain Francesco Totti. One of them put his arm around the player’s shoulders in a manner that seemed both patronising and menacing. And when Totti returned to the halfway line he could be heard telling his coach, Fabio Capello: “If we play on now, they’ll kill us.”

The two captains, Totti and Lazio’s Sinisa Mihajlovic, then met with the referee, the experienced Roberto Rosetti, who appeared to urge both sides to play on.

It was clear that several players and club officials were unwilling to resume the game, notwithstanding the presence on the pitch of Rome’s senior police officer, Achille Serra, who, in the interests of public safety, wanted the game restarted.

Rosetti was then handed a mobile phone and on the line was Lega Calcio president Adriano Galliani, and after a brief conversation, Rosetti abandoned the match.

If elements within the two clubs’ supporters had appeared to make a common cause of their call for the game to be stopped, they immediately returned to a more familiar hostile mode in its wake. By the end of the night, 36 fans had been arrested, with 60 police and 15 supporters injured in a series of running battles.

That infamous derby says much about the Roma-Lazio rivalry. Firstly, that this is arguably the fiercest derby in Italy, with minority elements on both sides always ready and willing to fight with one another – and, above all, with the police. And secondly, those same minority elements on either side of the Roman divide tend to share the same neo-Fascist, racist, anti-Semitic views, meaning that they can, on rare occasions, join forces. This happened not just on the night of the 2004 derby but also again in November 2012, when Roma and Lazio fans reportedly came together to attack Tottenham Hotspur followers in a pub at Rome’s Campo de Fiori on the eve of a Europa League tie between Lazio and Spurs.

Outsiders often think that the Rome derby features a clash between political opposites, between a club with a clear Mussolini/Fascist inspiration – often identified as Lazio, thanks recently to Paolo Di Canio – and one motivated by a liberal democratic tradition. The reality, of course, is that both these clubs grew up in a Mussolini/Fascist cradle. Roma were founded in 1927 at the behest of Mussolini himself, bringing together the major clubs of the capital – namely Fortitudo, l’Alba and Romano.

Il Duce wanted a powerful club to represent the mythical name of “Roma”. But there was one existing club in the capital who resisted the call, refusing to amalgamate with the new club – and that was Lazio.
Founded 27 years earlier, Lazio were at that time controlled by Giorgio Vaccaro, an ambitious young Fascist militant and First World War veteran who had boldly introduced himself to Il Duce at a Fascist Congress in Rome in November 1921. Vaccaro had declared a major interest in sport so Mussolini, convinced that his totalitarian regime would have to stake out a moral dominion over every sphere of the individual citizen’s life, including sport and recreation, had plans for him.

Vaccaro went on to become president of both the Football Federation and the Olympic Committee for a decade of the Mussolini dictatorship, playing a major role in running the Italy team that won the 1934 and 1938 World Cups. Back in 1927, he had Il Duce’s ear to such an extent that he was able to ensure Lazio were not swallowed up into the new “Associazione Sportiva Roma” club.

Despite political affinities, from that moment on a bitter rivalry was born. Reports indicate that the very first Lazio-Roma derby, played at the Rondinella Stadium in Rome’s fashionable Parioli on December 8, 1929, was marked by tensions. Even though this was a Lazio home game, there were far more Roma fans among the 15,000 crowd and they saw their team win 1-0.

Roma had more supporters for two reasons. Firstly, they could call on three sets of fans from their founding clubs, which meant that objectively they had three or four times as many followers. Secondly, Lazio, who were based in Parioli, had a far more middle-class following. Many of their fans reportedly stayed away from that first derby encounter as they were worried about the bellicose nature of the working-class Roma ruffians.

There was also tension about Lazio’s refusal to join up in the new club. The Laziali were considered snobs and out of touch with real “Roman” sentiments. At that first derby, the Roma fans made a lot of play out of their superior “romanita” as expressed by the new club’s name, its yellow and red colours, and its “Roman She-Wolf” symbol, featuring the wolf who, as legend would have it, suckled Romulus and Remus, the founders of ancient Rome. Given that there had already been scuffles at previous Roman games involving Alba, Fortitudo and Roman, there were even calls for that first derby not to be played
at all.

More than 160 games later, the Rome derby still continues to worry authorities. Such is its ongoing, potentially violent nature that the police have effectively banned a night-time version in modern times, insisting on a daylight kick-off for security reasons.

One aspect of the confrontation, however, has changed. These days, no one would accuse the Laziali of being Parioli snobs.

These days, both clubs draw their support from an across the board constituency that ranges from middle class to working class, from suburb to suburb, and from Rome city to the surrounding region of Lazio. If there is any significant difference in the two sets of fans, it might be that Roma tend to have a majority following in the city itself, while Lazio probably have more fans in the surrounding region from which they take their name. Both teams use different but powerful symbols of ancient Rome: the She-Wolf for Roma and the Eagle, mascot of the ancient Roman Legions, for Lazio.

To catalogue all the various “incidents” that have marked the history of the derby would require an account of Old Testament length, but over the years the game has seen a clash between some of the great names of Italian football: Fulvio Bernardini (Roma) and Silvio Piola (Lazio) in the 1930s, coaches Zdenek Zeman (Roma) and Sven Goran Eriksson (Lazio) in the 1990s, and great iconic players such as Totti (Roma) and Di Canio (Lazio) in the 21st century.

While Di Canio managed to score derby goals in 1989 and 2005 at either end of his much-travelled career, Totti has the highest number of derby appearances (36) and goals (11) in the game’s history.

When the then 38-year-old scored twice to see Roma pull off a 2-2 draw with Lazio in January this year, even he immortalised the moment by taking a “selfie” of himself celebrating in front of the Curva Sud, the Roma kop. 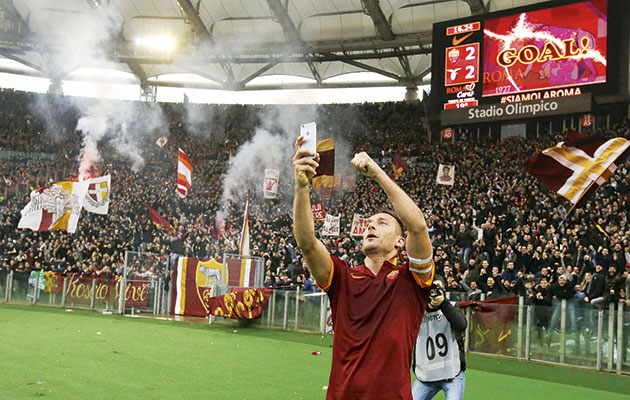 Negative derby moments include the Lazio curva greeting the Romanisti with a banner reading, “Auschwitz Is Your Country, The Ovens Are Your Homes” in 1998. Then there was the death of 33-year-old Lazio fan Vincenzo Paparelli, who was hit in the eye by a rocket flare fired across the Stadio Olimpico pitch by an 18-year-old Roma fan, Giorgio Fiorillo, before an October 1979 derby.

The terrified Fiorillo subsequently went on the run for 14 months but was finally arrested and sentenced to six-and-a-half months in prison. During his time on the run, he had phoned Angelo Paparelli, the brother of Vincenzo, practically every day to beg forgiveness, swearing that he had not intended to hurt anyone.

While the Rome derby is often recalled for a variety of usually negative reasons, it is rarely recalled for the quality of its football. It matters too much, and the fan pressure on players is so strong that 99 times out of a 100 the derby is, technically speaking, very poor. However, it is never boring and nearly always terrifyingly electric.

It is often said that the fans of the capital city lay too much emphasis on the derby. Critics used to suggest that winning the derby meant more to Roman fans than winning the league title.

Given that Roma have won the scudetto just three times, and Lazio only twice, the fans could be forgiven for taking much solace from a derby win.