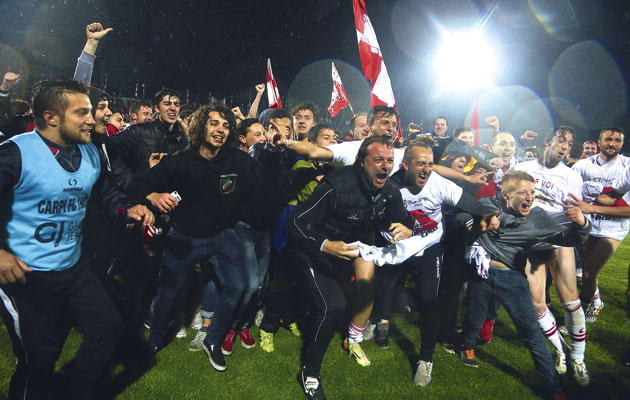 The first time that Carpi, Italy’s unexpected newcomers to Serie A next season, flashed across the international media’s radar it provided a moment of light relief.

It happened a couple of years ago when a hapless Swedish couple opted to take a romantic holiday on the isle of Capri, off the coast of Naples.

On picking up their hire car at Milan airport, instead of typing “Capri” into the satnav the couple inserted “Carpi”. And it was only when they went to the local tourist office to ask where the famous Blue Grotto (of Capri) was, that they discovered their mistake: the Blue Grotto was 600km away.

As of next season, many more people are likely to become aware of Carpi. In an Italian springtime that has been buoyed by the impressive European performances of Juventus, Fiorentina and Napoli, their story represents another positive chapter in the not-always-sunny landscape of Italian football.

In many senses, Carpi are an expression of the hardworking, industrially successful and often self-starting Emilia Romagna region in which they are based. The club is owned and administered by three men – Stefano Bonacini, Roberto Marani and Claudio Caliumi – who control “ready to wear” clothing-industry firms: Caliumi with the Madrilena brand, and Bonacini and Marani with the Gaudi brand.

Bonacini has called their team the “Ryanair of Italian football”, adding that Carpi are a “low cost club who win”.

In essence, the club has a turnover of €4.5milliion, of which €3m accounts for the players’ wage bill. Sports director Cristiano Giuntoli, who is a former player himself in Serie C and D, points out that no one at the club earns more than €100,000 a year. Critics gleefully point out that the total Carpi wage bill would not pay half the salary of Roma midfielder Daniele De Rossi, who is reputedly the highest-paid player in the country with an annual salary of €6.5m.

Bonacini points out that his club does not even have an official team blazer, suggesting that such items come in the “not strictly necessary” category. Giuntoli, meanwhile, underlines how the squad was put together with a bargain-basement policy that saw the arrival of key players such as Nigerian striker Jerry Mbakogu – the club’s leading goalscorer this term – thanks to the collapse of his previous club, Padova.

Alongside Mbakogu are 22-year-old Gabriel, who was Brazil’s 2012 Olympic goalkeeper and is on loan from Milan, former Slovenia under-21 defender Aljaz Struna, who is now 24 and on loan from Palermo, and three 25-year-olds in defender Riccardo Gagliolo and midfielders Lorenzo Pasciuti and Antonio Di Gaudio.

The team’s captain, 31-year-old Filippo Porcari, is something of an exception in that he has actually played in Serie A before, making one appearance for Parma, in a 3-2 win over Piacenza in May 2003. Apart from that game, however, his career, like that of his team-mates, has been played exclusively in the lower ranks of Italian football. 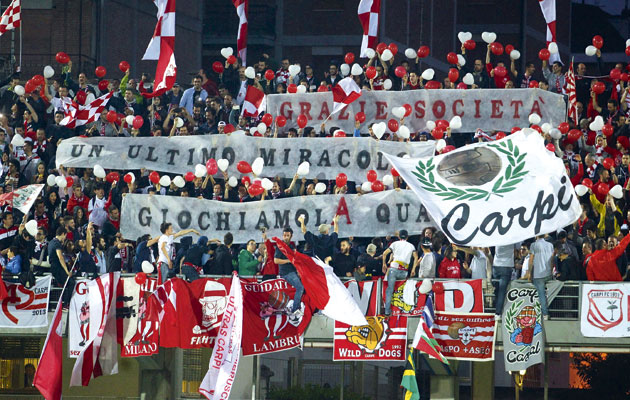 Carpi’s rise to the top has been ultra fast given that, just six years ago, they were playing in Serie D. Since then they have pulled off four promotions: first going up to Lega Pro Division 2, then Lega Pro Division 1, then Serie B two years ago and now the pinnacle of Serie A.

The coach behind this latest promotion is 60-year-old Fabrizio Castori, a man who, like the club and its players, has spent his entire professional life in the lower divisions, coaching the likes of Grottese, Cerreto, Monturanese, Tolentino, Lanciano and many more besides.

Like his squad, Castori has been on a modest salary of around €75,000 per annum, but he is now in line for a bonus. However, it says much about expectations this term that the contractual bonus was originally written into his contract last summer with a view to being paid out in the event of the team avoiding relegation back down to the Lega Pro rather promotion to A.

All in all, for Castori and his “band of brothers”, Serie A represents totally unchartered territory. It remains to be seen just how the club will approach the top flight, but Bonacini indicated to La Gazzetta dello Sport recently that Carpi will continue to follow the same good husbandry principles that have served it well thus far.

Asked what level of investment the club would make for next season, Bonacini said: “Right now, I can only say that we will use the same criteria and philosophy with regard to our budget. In other words, we will be taking it one step at a time.”

Given the familiarity that sports director Giuntoli has with the lower ranks, it is not hard to imagine that Carpi will go looking for a mixture of promising young talent from the lower divisions and some older, experienced Serie A hands, rather than signing expensive foreigners.

However, one intriguing possibility raised by Giuntoli is that the club might consider making an offer to 38-year-old Luca Toni of Verona. The former Italy, Fiorentina, Bayern Munich and Juventus striker is currently on a salary of €1m at Verona.

In the interests of one last hurrah, Carpi might hope that he might be willing to play for much less. And they are likely to be in need of reinforcements up front as Mbakogu’s fine form this term may well have earned him a move elsewhere. 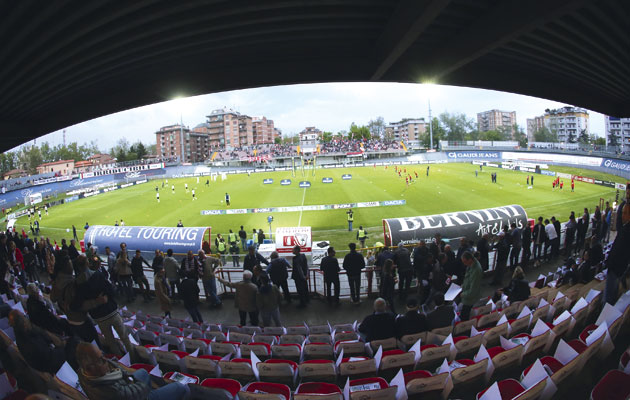 In the meantime, the club has a venue problem in that their own 4,500-capacity Stadio Sandro Cabassi does not meet Serie A requirements. Indeed, it doesn’t even meet Serie B standards. There had been some speculation that the club might persuade local businessmen and local government in Carpi to invest in the restructuring of the Cabassi, but this idea has been seen as a non-starter since it would take too long to complete the necessary work.

So it now looks as though the team will be forced to play home games at either nearby Modena or Parma.

Modena themselves have not played in Serie A since the 2003-04 season, while liquidation-threatened Parma, who have been relegated from Serie A this season, will count themselves lucky if they manage to play in any division at all next term.

Carpi will take heart from the performances of their Emilia Romagna neighbours Sassuolo, who were promoted to Serie A for the first time two seasons ago and are hoping to stay there for a third successive campaign.

At this point, though, that looks like an extremely tall order for a Carpi team who may well have come too far, too fast.