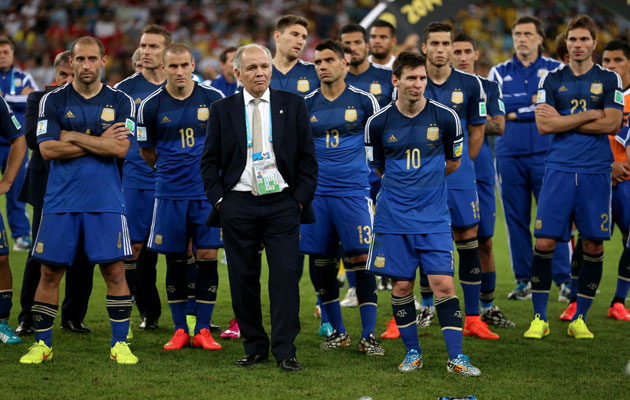 The press conference had been arranged for 4pm at the national team’s training headquarters outside Buenos Aires, in Ezeiza. Alejandro Sabella was set to make his final appearance as Argentina coach, having guided the side to the World Cup Final in Brazil weeks earlier.

Across town, at the presidential palace, the Casa Rosada, the focus was on how the country was about to go into default, or a technical default, or as the government preferred to label it, “a legal impasse”. Whatever it was called, the latest news from New York about negotiations with voracious hedge funds demanding full repayment on their Argentinian bonds was not good.

It was already set to be a busy day. And then at around midday on July 30, the news broke that Julio Grondona, AFA president and FIFA vice-president, had died after heart complications, aged 82.

Grondona’s death made headlines across the world. But back home it would be felt in equal measure both in Ezeiza and at the Casa Rosada because, during his 35-year presidency, national politics and football were inevitably and inextricably intertwined.

No one person had held on to such a powerful position in Argentina for as long as Grondona had. At Casa Rosada, in the capacity of representing AFA, he had met with presidents of varying ideology and legitimacy, from the murderous military dictatorship in power when he became AFA president in 1979, through Radical and Peronist governments of differing colours. In the meantime, while he accompanied Argentina to nine World Cup finals, winning in 1986 and runners-up in 2014, across the river in Uruguay their FA had gone through 13 different presidents in the same period.

Grondona himself had pencilled in 2015 as the year he would step down. But there was no plan in place for succession. Some wondered if he had really meant it. On the news of his death, seven days of mourning were announced, with the start of the new season delayed and AFA vice-president Luis Segura assuming control in the interim. Lionel Messi and FIFA president Sepp Blatter flew in to pay their respects. As those who had worked alongside him gave interviews, and Grondona’s legacy was discussed and debated, what was clear was that Argentinian football would never again have a president quite like him.

“They give me my power,” he would say of the clubs and presidents who voted for him in every presidential election. Grondona’s presidency was “socialism with money” according to him. Put another way, everyone owed Grondona a favour as he would help to bail out needy clubs. He described what a president requires as the “Three Ps”: Paz, Paciencia y Pelotas, which translates as “peace, patience and balls”.

There were plenty of accusations over the years. “I’ve had more accusations against me than Al Capone,” he once quipped. The engraving on his ring was testament to his approach to problems: “Todo Pasa” [everything passes]. His loyalists point to him never facing trial. Merely echoing reports of corruption allegations would earn calls from fervent supporters to clarify the issue.

His detractors like to point to photos of him from the early years in the AFA, when the country was still ruled by a military dictatorship. Grondona’s position at FIFA was inherited from Carlos Lacoste, who had reached the position of FIFA vice-president without having an official position at the AFA or any Argentinian club, as per the statutes, but who had overseen the organisation of the 1978 World Cup. Years later, the Buenos Aires courts said Lacoste had provided unsatisfactory evidence of how he increased his personal wealth by
443 per cent between 1977 and 1979.

Grondona led the AFA with dexterity. Despite signing a contract for TV rights in 1996 with the Clarin Group that lasted until 2014, he ripped that up in 2009 to sign a new deal with the Casa Rosada. “Futbol Para Todos” was born, an agreement in place today with the government as rights holders, games free to watch on national television and a deal that constitutes a considerably better financial agreement for the AFA and the clubs that the previous agreement.

Perhaps of least concern to the new president is that the national team needs a new coach. Gerardo Martino had been widely touted as the replacement for Sabella. He brings international experience from his spell with Paraguay, not to mention a good relationship with Messi, and is a favourite of the AFA.

But the AFA and its new president must also deal with a worrying panorama in the domestic league.

When the season is up and running again, there will be the barras bravas behind the goals. There will be no away supporters, who are barred under the ban that disingenuously cites problems between sets of supporters as the root cause of endemic violence in football. Based on figures from non governmental organisation Salvemos al Futbol (Let’s save Football), it is a question of weeks before another name is added to the 286 football-related deaths in Argentina. In 1979, when Grondona took over, that number was 103.

There will be the dilapidated stadiums, the teams mined of quality who are hoping to sell their best young player for a much-need cash injection. Futbol Para Todos has dramatically increased TV income for clubs but their debts continue to snowball. Historically, Argentinian football has always had these problems, but failure to deal with these issues is a failure of Grondona’s presidency.

What will change, in a country that already specialises in eccentric league set-ups, is the league structure. This season had already been named the Transition Tournament. The three-year coefficient that decides relegation, and that Grondona’s AFA installed in 1983, is on hold. There will be one short season, in keeping with the system installed in the early 1990s, until the end of the year. Then, next February, 10 teams will be promoted from the second division to create the new 30-team super league. It is a format about which the only certainty, right now, is that it is what Grondona wanted. Few see any merit in the idea.

With the death of Grondona, Argentinian football is in transition. It is unlikely there will ever be a president who wields such power and who is as controversial as he is adored.

Whether this transition is simply towards a continuation of how it has been run for the past 35 years, or whether it is towards a real transformation, is up to Argentinian football itself.