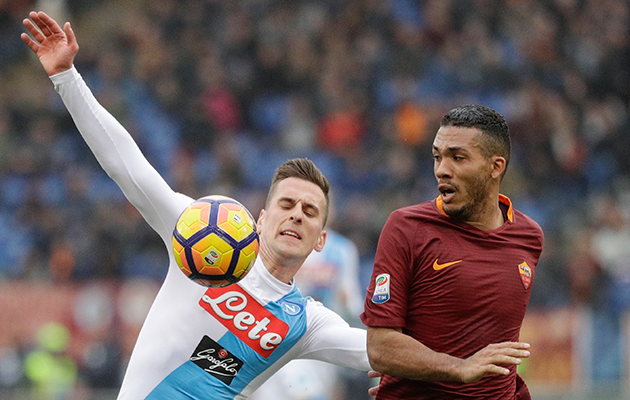 It could be a night to remember.  Napoli head into their second round, return leg Champions League tie at home to Real Madrid on Tuesday night with apparently little or no chance of making a comeback from an emphatic 3-1 defeat at the Bernabeu three weeks ago.

Given the extent to which Napoli gave a wretched performance of the “rabbit-stuck-in-the-headlights” variety in the first leg, it seems impossible to give them any realistic chance of coming back from that debacle.   However, hope, as Italians would say, is always the last thing to die so…here we go.

Since that drubbing at the Bernabeu three weeks ago, Napoli have hardly looked clever in a 2-0 Serie A defeat by Atalanta and a bitterly controversial 3-1 defeat by Juventus in an Italian Cup semi-final, first leg in Turin last week.   So why should one give them even the slimmest of outside chances of being able to climb back from 3-1 down against Messers Ronaldo, Bale, Modric et al.?

In reality, Napoli’s thin chances are based on two obvious considerations.    Firstly, the San Paolo in Naples is preparing for a night such as it has not seen the halcyon days back in 1987 when the Diego Maradona led Napoli were booted out of the first round of the then Champions Cup by Real Madrid no less.

At this point, it looks like Napoli v Real Madrid will generate the second highest Italian box-office of all time, namely €4.4 million euro via a 56,000 strong attendance.   (Only AC Milan v Barcelona in a 2012 Champions League quarter-final tie tops this game).   Will a white-hot, passionate home town atmosphere be enough for the Napoli team to find their courage against the reigning champions?

If a passionate home crowd for this sell-out game was to be taken for granted, given the level of support that Napoli can command, the same can hardly be said of Napoli’s  mental state.   Yet, in a 2-1 away defeat of second placed Roma last Saturday, Napoli looked, as they have often looked in the last two seasons, like the second best side in contemporary Italian football, second only to Juventus.

When things are ticking over nicely, this Napoli side is capable of weaving a magic web in which Slovak playmaster Marek Hamsik gives a pretty good imitation of neapolitan tiki-taka as he sends Belgian Dries Mertens, Spaniard José Marìa Callejon and Lorenzo Insigne goalwards.

Napoli’s ability to block Roma’s attempts to comfortably play their way out of defence, quickly turning such moments into a counter attack as they won posession, were there for all to see.   Napoli’s 49th minute, match-winning second goal, scored like the first one by Belgian Dries Mertens, came from precisely such an immediate “turnover” as Roma lost possession deep in their own half.

The scoreline probably flatters Roma just a little since their goal came in the 89th minute from Dutch midfielder Kevin Strootman at a time when Napoli had taken their foot off the accelerator as they waited for the final whistle.   Napoli were clearly much the better team and accordingly, they go into their “do-or-die” clash with Real with a much boosted morale.  Not only have Napoli rekindled flagging morale but, in the meantime, they have moved to within two points of Roma in their battle for second place.

On top of that, Napoli owner, cinema tycoon Aurelio De Laurentis and team coach, Maurizio Sarri, seem to have patched up their differences following bitter polemics in the wake of that first leg 3-1 defeat.   In essence, De Laurentis blamed Napoli’s all too timid attitude on a loss of nerve by Sarri whilst he was sharply critical of the coach’s decision not to field impressive Croat, 21-year-old Marko Rog, bought for €13.5 million euro from Dinamo Zagreb last August.

Against Roma on Saturday, Rog looked like arguably Napoli’s best player, aggressive and quick in a mesmerising midfield.   Owner De Laurentis may have had a point.   We suspect that, this time, Sarri will include Rog in a midfield that also features Hamsik and Guinean midfielder Amadou Diawara, whilst the Callejon-Mertens-Insigne trio will almost certainly lead the attack.

News from the Madrid camp, however, is hardly encouraging (from the Napoli viewpoint) with Welshman Gareth Bale, Frenchman Karim Benzema and footballer of the year, Cristiano Ronaldo, all ready for duty.   Napoli clearly need the good luck of an early goal here to create even minimal space for themselves.   Anything else and Real are into the quarter finals.    Those considerations will not hinder neapolitan dreams, however, as the home fans hope against hope that this could indeed be a night to remember.