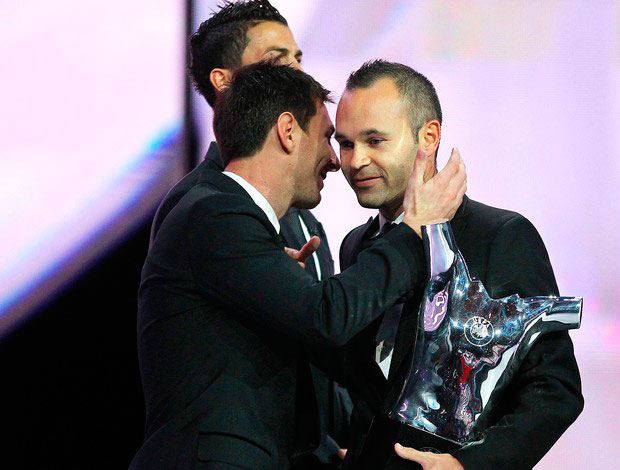 ESM: Let’s talk about the draw and a bit about Champions League. Barcelona seem to be in a very equal group in the beginning.

Lionel Messi: I don’t think that there are equal groups in Champions League. I think the opponents are all complicated. It seems like some groups are more complicated than others [inaudible] and every team can make it complicated for you, and they are different games.

As you know, Wembley is a symbolic place for Barcelona since they won two Champions League there, and again this year the final will be played on Wembley. Is it Barcelona’s goal to get to the final and win the Wembley Triple?

Our goal is always to win trophies, now we just have to take it easy, step by step. We have many games to play.

The last season was exceptional for you, you scored 55 goals? Is there anything you can do to improve this season? If so, what would that be?

I don’t know, every season I try to keep developing and become better, and that’s something I can convert into a lot of goals.

In La Liga Barcelona and Real stand out from the rest, even though they are 5 point behind, but is there any other team to fear in the league or is it just you two? If so, which team is it?

I don’t know, but it’s true that every team can take some points from you – they can win, or you can draw, and it can be complicated. Real do very well, we have 5 more points than them at this moment.

You have had some great moments in your career, in terms of scoring goals, passing, etc. Is there something that stands out? A goal or something that means more than the other things?

No, actually no. I remember all the titles we have won.

As the last thing I have a couple of questions about Argentina since we’re a step away from the World Cup. How important is winning a title with Argentina to you?

Very much. For me it’s a dream. That’s the last thing I miss in order to win everything.

In case you win it in Brazil, how important would the title be? Would it be the absolute maximum?

This interview was conducted by a member of ESM, of which World Soccer is a member.