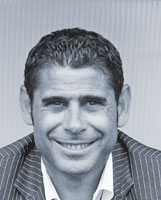 World Soccer: Despite being from Malaga, this is the first time you have had any formal involvement with the club. What is your role?

Fernando Hierro: For me, this is my home. I am from here, I still have a home here, my brother was a player here – he has been sporting director too – and the club were looking for someone like me. Jose Carlos Perez [the club’s CEO] called me and said they needed someone who represents the club and the city.

It’s my job to help integrate the club and its owners into Spanish football, to help them understand it and to help them make themselves understood.

The owners have great ideas and I have to help ease their passage at the LFP [the league], the RFEF [Spanish football federation], with other clubs. Why? Because they want to do things the right way. They haven’t just turned up thinking about the now but thinking about the future too.

There seems to be a real concern to be liked. Malaga have supported other local clubs and signed a sponsorship deal with UNESCO. Is that a counter-balance to the classic accusations levelled at foreign owners and their money?

We want this to be a simpatico club. And if people come into Spanish football willing to invest money, they’re very welcome. The Sheikh has a project and has been very straight right from the start. It’s important that people don’t think it is just about the money. If you look at the players we have signed, they were all signed for rational prices; there has been no madness.

How would you describe the project at Malaga?

Sensible. We have a magnificent coach and a magnificent sporting director. The coach has a four-year contract and his position is consolidated. He was not sacked when things were going badly last year because there is total faith in him. His position was reinforced by survival and the way that the team played in the final few weeks. The project is well thought out and the prices paid for players reasonable.

There is a good mixture in the squad: players from the youth system who were born here and raised here and have hope and have to give the club heart, players of 24, 25, 26 looking to grow with the club, and experienced players who still have a fantastic commitment to the project: Ruud, Baptista, Demichelis, Maresca, Toulalan.

And how high is that?

We don’t know. What we do know is that we have a magnificent coach, a magnificent squad, the hope and enthusiasm of a city. This is the fifth biggest city in Spain and there is a greater area around it. Malaga does have potential to make this a great project.

So why has it never happened before?

Because it’s not that easy to find people who have the financial muscle to be able to put a project like this in place. That is a reality. You have to keep in mind that Sheikh Al Thani came to a club that was virtually bankrupt, that had gone into administration, that had been in that process of administration for almost four years.

Now there are 28,300 seats at the Rosaleda of which 26,000 will be taken by season-ticket holders. The stadium will be redeveloped and expanded. We can see that in order to consolidate the project we need a social base and this city, this club, has that.

We need a new training ground, facilities of the highest level, and we’re building that. We have to consolidate the youth system as well as the first team. We have got those projects under way. There is a plan for the future at all levels.

All that will mean massive expectations. How do you live with the pressure?

More pressure than last year, when we were fighting not to be relegated? I don’t think that’s possible. And when you look back on that, at the critical moment, Malaga stayed calm, true to itself. That makes the project strong; the union between the club, the coach and the sporting director during those difficult days helped to consolidate the project and strengthen the club. There was support from the fans too. All of that helps to show that this is a resistant project, one that can last. Unity brings strength.

Can you really compete with Madrid and Barcelona?

Today, there’s no chance. We have to be realistic. Over the last two years they have been 25 or 30 points ahead of the rest. That’s the reality. But behind them there is a group of teams that Malaga can aspire to get into. It’s very hard to see anyone from that group fighting for the first or second slot in the table, but the chasing pack has the hope of being able to cut that gap, getting closer. It can’t be 25 or 30 points any more.

I think there are some teams that are “resting”. They are thinking: “Ah, Malaga, they can try to cut the gap this year”. But we also have to be realistic when it comes to competing with them – we are a relatively new project that hasn’t been in place for long. We know what happened last year, we know where we have come from and we will look to the future.

We’re moving slowly; there’s no point in going mad. It’s great that the fans are dreaming and I would never take those dreams from them, but as directors of the club we cannot sell an illusion. What we can say is that we have a great squad, a great coach, and that we’re ready.

This interview was originally published in the October 2011 issue of World Soccer.