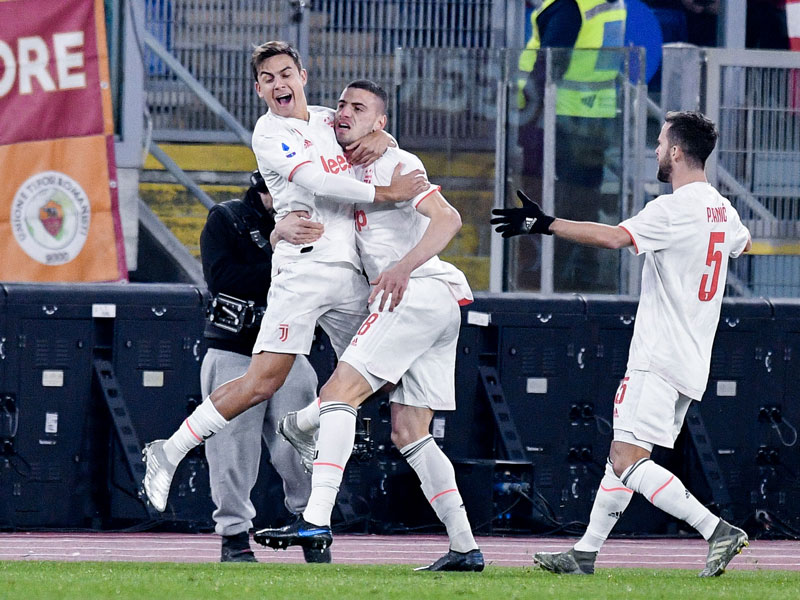 Paddy Agnew’s Notes From Italy: Juventus On Top Of Serie A At Halfway Stage

The Italian title, “Campione D’Inverno” (Winter Champions), awarded to the team which is top of Serie A at the exact halfway point in the season, is of course simply a media fantasy rather than a concrete reality. Much loved by headline writers, however, this media fantasy bears a heavy symbolism.

In that context, Juve’s 2-1 Sack of Roma on Sunday night has a look of déjà vu about it. With 19 of the 38 Serie A games played, Juventus are back on top of the table, two points clear of Inter and six clear of third-placed Lazio. Plus ca change, plus…?

What was stunning about Sunday night’s game is that, for all practical purposes, it was all over after just 10 minutes. Juventus, the team that twice lost to Lazio, first in Serie A and then in the SuperCoppa final, in the last weeks of December, would appear to have left those hiccups far behind. Or have they?

The thing is that no team concedes two goals to Juventus in the first ten  minutes and then lives to tell the tale. This was a night of untold misery  for Roma. Firstly, two outstanding defenders in Serb Aleksandr Kolarov and Englishman Chris Smalling failed to clear a third minute free kick from Argentine Paulo Dybala to allow Turkish defender Merih Demiral a free shot on goal from the six yard line. 0-1 down.

Six minutes later, the Roma defence compounded the misery. Opting to play his way out of defence, Roma goalkeeper Pau Lopez passed to French midfielder Jordan Veretout, right on the edge of the penalty area. It was, to say the least, a debatable pass since Dybala, who was lurking close by, promptly caught Veretout off guard, challenged him and forced the Frenchman to foul him, thus conceding a penalty. The boy Ronaldo promptly slotted that one home for his 14th goal of the season. Ten minutes gone, 0-2 down and it was “Game Over” for Roma.

From then on, Juve understandably administered the game to a large extent, giving the impression however that if they really wanted to, then they could easily score a third goal. Indeed, they did score that third goal through Argentine Gonzalo Higuain, only for it to be overruled for an offside.

Roma’s first half misery had been further compounded just after the half hour point when Nicolo Zaniolo, not only Roma’s best player on the night but also one of the most talented players in Roberto Mancini’s Euro2020 Italy squad, fell awkwardly after an inspired slalom run through the Juventus midfield. Zaniolo’s howl of pain could be heard on the stands of the 60,000 plus packed Olimpico.

From the moment he fell, it was obvious that this was a bad injury. Zaniolo’s desperation, the sick, worried look of the other players and the seemingly useless attempts of the Roma staff to ease his pain all pointed only one way. Before the match was over, we were informed that, as many had suspected, he had torn his right cruciate knee ligament.

Zaniolo is now almost certainly out for the rest of the season. He will be badly missed not only by Roma but arguably even more by Italy at Euro2020. Nor did the Sporting Gods finish their dastardly deeds there.

Ten minutes before Zaniolo was stretchered off, Demiral, scorer, of the first goal had also limped off with a serious looking knee injury which on Monday morning was confirmed as another cruciate ligament tear. For Demiral, as for Zaniolo, this season ended at the Olimpico on Sunday night with both players now facing surgery and a four to six months rehabilitation period.

The match, however, was not yet over. Against all the odds, Roma got back into the game for the last 20 minutes, following a 68th minute penalty scored by Argentine forward, Diego Perotti. What was surprising about this period of the game was that in re-finding their courage, in taking the game to Juventus, Roma appeared to cause Juventus some bother.

Indeed, the champions, who for long had appeared totally dominant, spent the final five minutes of time added-on, hanging on anxiously for the final whistle. That little moment of apparent frailty may yet give some courage to those who think that the title contest is not yet over and decided.

The anti-Juve camp, though, has to process some pretty intimidating information. Firstly, as we move towards the spring and the resumption of the Champions League, Juve, who face Lyon in the second round, are gearing up.

Secondly, their main man, Cristiano Ronaldo is looking very perky indeed. He has now scored nine goals in his last six games. He remains a phenomenally self-centred but absurdly talented player capable of producing moments of pure magic such as he did when drifting past Chris Smalling, no defensive sluggard, with mesmerising footwork, halfway through Juve’s stunning first half.

Whilst coach Maurizio Sarri continues to rotate his attack, sometimes lining out with the terrible three, Ronaldo, Dybala and Higuain or sometimes just Ronaldo and Dybala plus an attacking midfielder such as Aaron Ramsey, one thing remains clear. The one player whose name will always be in the team sheet is that of Ronaldo.

Thirdly, the anti-Juve camp have taken plenty of courage in the last month from the rise of and rise, not only of Inter but also of Lazio.  Inter’s 1-1 Saturday night draw at home to Atalanta, however, showed that they are feeling the pressure of matching strides with Juventus. Admittedly, Atalanta are an excellent side, capable of playing high quality, intensive football. Had they beaten Inter, who opened the scoring with a 4th minute goal from Argentine Lautaro Martinez, Atalanta would have stolen nothing.

Those who believe in destiny might argue that Juve’s only other serious rivals, namely 3rd placed Lazio, could end up becoming bigger obstacles to the Old Lady than Inter. Last Saturday, Lazio, continued their magical moment winning their 10th consecutive league game 1-0 at home to Napoli 1-0.

Here again, the Sporting Gods had a heavy say. With the game evenly balanced on 0-0, Napoli goalkeeper Colombian David Ospina, in the 82nd minute unwisely attempted to dribble his way past Serie A’s leading goalscorer, Ciro Immobile, rather than pass to one of two defenders or to just blast it upfield. Immobile predictably took the candy from the baby to slot home his 20th goal of the season, despite the frantic clearance efforts of defender Giovanni Di Lorenzo who only managed to knock the ball into his own, unguarded goal.

In this, the year when Lazio celebrate their 120th anniversary, this is the first time ever that they have won 10 Serie A games in a row. There are those tempted to think that Immobile’s goal is a sign of destiny for Lazio in this special year. That could be but World Soccer remains unconvinced by Lazio’s comparatively weaker overall squad strength

For the time being, we can be grateful that this year at least, the Old Lady is not running away with the title, without at least a struggle on the road to the scudetto. She might be “campione d’inverno” but she still has to win the real title.