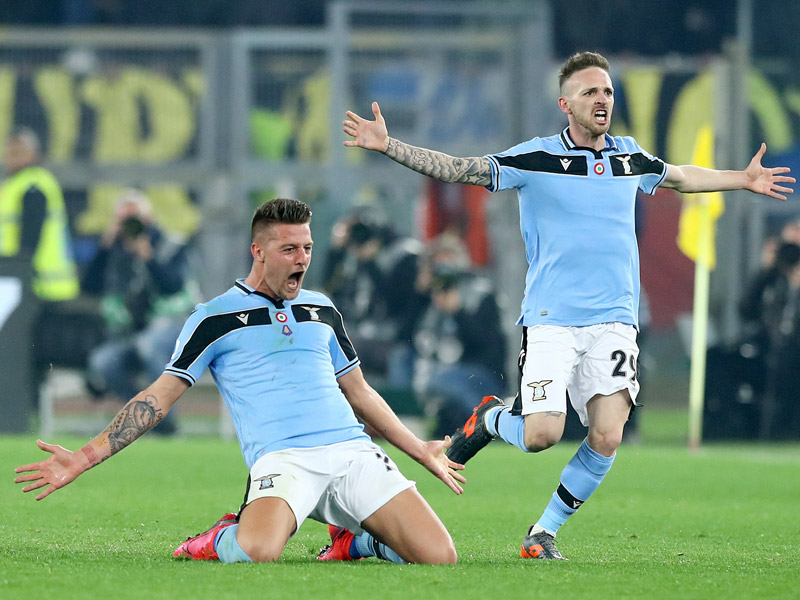 Lazio still have a dream. In the aftermath of their impressive 2-1 win over Inter in Sunday night’s top of the table clash in Rome, there is no getting away from it anymore. Namely, Lazio are genuine, ten carat title challengers, now in second place, just one point behind champions Juventus (unimpressive in a 2-0 home win v Brescia) and two ahead of third placed Inter.

Throughout Lazio’s excellent run this winter, highlighted by successive league and Cup wins against Juve, your correspondent has been reluctant to hype up their title challenge. One always suspects that qualification for next season’s Champions League represents the real (and not so secret) ambition for the Roman club. Furthermore, the superior squad strength, in terms of quality and quantity, of both Juventus and Inter will surely win out in the long run, no?

Those considerations are still valid but after Sunday night’s win, all bets are most definitely off. Make no mistake, this Lazio side is an excellent team, handled by a terrific coach in Simone Inzaghi and featuring some real midfield quality in players like Spaniard Luis Alberto and Serb Sergej  Milinkovic-Savic, not to mention Serie A’s leading goalscorer, Ciro Immobile up front (now on the 26 goal mark).

For those of us at the Olimpico, perhaps the most impressive aspect of Lazio’s win was the vigorous, determined manner in which they came back from the disappointment of going a goal behind, against the run of play too, just seconds before the half-time whistle sounded.

A goal just before half time is so often a killer. Not this time since Lazio came out of their corner fighting, making the most of a hesitant Inter defence to score an equaliser within five minutes of the restart. That “hesitant” Inter defence, too, needs just a little explaining.

For most of this season, Inter have looked not exactly invulnerable but certainly reasonably sound in defence. In recent games such as in the first half of the Milan derby (which Inter won 4-2) or their 0-1 midweek, Italian Cup semi-final home loss to Napoli, the defence has looked just a tad on the rocky side.

One of the reasons for that is that regular first choice goalkeeper, Slovene Samir Handanovic, was ruled out of both those games and again on Sunday night through injury. At the moment, many critics would argue that Handanovic is the best goalkeeper in Serie A. Without him, the whole Inter defence seems to have lost an anchor of stability.

Reserve keeper, 34-year-old Daniele Padelli, is a very experienced player who has kept goal in Serie A for such as Udinese and Torino. Yet, his problem in taking over from Handanovic was that, since joining Inter as reserve keeper in July 2017, he had not made a single Serie A appearance for the club.

A certain level of ring rustiness was to be expected and it promptly made itself felt, especially in the first half of the Milan derby. An element of insecurity had thus wormed itself into the Inter defence, an element which arguably played a critical role in both Lazio goals when Padelli seemed both slow and indecisive.

Be that as it may, however, Padelli cannot carry the can singlehandedly for Inter’s shortcomings. For example, the terrible twins, strikers Argentine Lautaro Martinez and Belgian Romelu Lukaku, were this time unable to get their side out of jail as they have done throughout the season. This was because of the excellent defensive work of such as Francesco Acerbi in central defence and in particular of Lazio central midfielder, Brazilian Lucas Leiva.

Then, too, you might argue that the great man himself, coach Antonio Conte, perhaps waited too long before bringing on fresh legs in the second half.   Lazio had had arguably the better of the first half, with Ashley Young’s goal for Inter coming from a counter attacking situation that went against the run of play.

After Immobile had scored the Lazio equaliser from the penalty spot, just five minutes into the second half, the momentum was with the home team.    Inter probably needed some fresh legs and ideas even before Lazio put themselves in front with a brilliantly taken Milinkovic goal in the 70th minute.

As it was, Conte brought on Nigerian Victor Moses and Dane Christian Eriksen with just a quarter of an hour left to play, whilst Chilean Alexis Sanchez played for seven minutes. That all seemed too little, too late to see Inter grab an equaliser.

Then, too, even Inter’s two defensive giants, Dutchman Stefan De Vrij and Slovak Milan Skriniar, looked less secure than usual. In the mix-up which preceded Immobile’s penalty equaliser, first Skiriniar completely “skied” an attempted clearance and then De Vrij barged into Immobile, knocking him over right in front of referee Gianluca Rocchi. The resultant penalty call may have been slightly “debatable” but no one could deny that Inter had conceded a goal which in the words of Conte was “totally avoidable”.

De Vrij could argue that his mistake owed something to the merciless whistling and jeering to which he was subjected by the Lazio fans almost every time he touched the ball.  You see, De Vrij is a former Lazio player who “betrayed” the Roman club by transfering to Inter, on a free transfer in the summer of 2018.

That was bad enough but it was made much worse by the fact that whilst still a Lazio player, De Vrij incurred a crucial penalty in a home league game on the last day of the season, against Inter no less. That penalty helped Inter go on to win the game and qualify for last season’s Champions League, at the expense of Lazio. Cynical Lazio fan minds would argue that, given that De Vrij already knew he was Inter-bound, then he did it on purpose. Hardly… but fans will be fans and on Sunday night, there was no forgiving De Vrij.

More seriously, perhaps, Antonio Conte reflected ruefully after the game  on Inter’s Champions League campaign last autumn when his side had twice let a halftime lead slip away from them, against Barcelona and Borussia Dortmund, saying:

“We were in control of those games and yet we lost them both. We have got to go through a certain learning curve, we’ve got to improve. At the beginning of the second half tonight, we looked frightened…”

Those defeats to Barcelona and Borussia essentially cost Inter a place in the second round of the Champions League. It is early days yet to suggest that this second defeat in four days means the end of Inter’s title challenge but it does suggest that Conte’s Inter remains a work in progress. As for Lazio, their position was neatly summed up by the hero of the night, Serb Milinkovic:

“Win the title? That is not obligatory, what is obligatory is to qualify for the Champions League next season… But we’re up there now and we’ll give it a go and try to win the scudetto…”

Milinkovic also confirmed that during the half time interval, the prevailing mood in the Lazio dressing room had been one of frustration at finding themselves behind in a game which, for periods, they had dominated, commenting:

“We said to one another, we have to win this game and then we went out and made sure that we did just that…”

Lazio’s next three games, against Genoa, Bologna and, above all, versus Atalanta, may tell us more. Arguably, it was Atalanta who produced the best performance of the weekend, coming from 0-1 behind at half time to  defeat Roma 2-1 with 15 minutes of aggressive and intensive football after the break in which they powered their way past Roma.

As a warm up for their Champions League second round, first leg, home tie against Valencia on Wednesday night (the match will actually be played at the San Siro in Milan), this was very impressive stuff. For Atalanta, as for Lazio, the dream lives on.