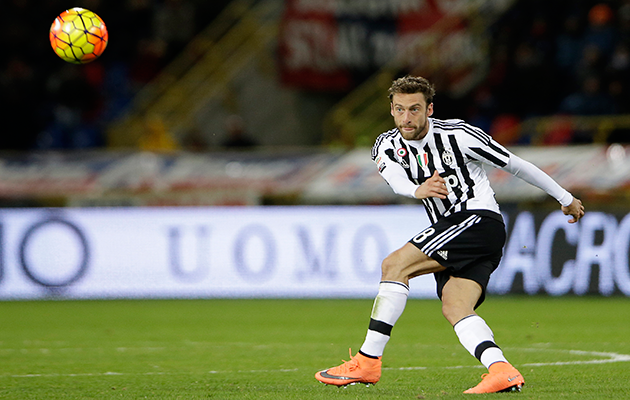 On a weekend when Old Lady Juventus continued her inexorable progress towards a fifth consecutive Serie A title win, cruising past Palermo 4-0, arguably the most significant news concerned the injury to Juve’s Italy midfielder Claudio Marchisio, now definitively out of Euro 2016.

Given the unnatural movement of his left knee as he tackled Argentine Franco Vazquez and given the player’s obvious pain, it was immediately clear that Marchisio’s injury was serious. Subsequent MRI scans confirmed that he had torn his cruciate knee ligament, meaning the he will be out of football probably for six months.

It is not difficult to predict which of Marchisio’s two team coaches, Massimiliano Allegri of Juventus and Antonio Conte of Italy, will miss him most. Following a weekend when Inter beat second-placed Napoli 2-0 on Saturday, Juventus are now nine points clear with just five games to play. Given that the Old Lady has won 22 of her last 23 games, it is only a question of “when” she and Allegri lift the trophy, not “if”, with or without Marchisio.

For Conte, it is a different matter given that Marchisio would have been many critics’ idea of an automatic, first choice selection. With Marchisio ruled out, Conte may look to two of the following three – Milan’s Giacomo Bonaventura and the Italo-Brazilians, Thiago Motta of PSG or Jorghino of Napoli – to provide the sort of midfield bite and cover supplied by Marchisio.

To his credit, Marchisio admitted on Monday that injuries like his simply form part of “the risks of the profession”, adding that he would try and come back from the mishap “well and as soon as possible”. In the meantime, Juventus will survive (and win) without him.

Which is perhaps more than can be said of Napoli who, looking tired and uninspired, badly missed their talisman striker, Argentine Gonzalo Higuain, in their 2-0 loss away to Inter. With Juventus (almost) home and dry, the only intriguing Serie A question to be resolved now concerns the three way battle for second and third places (and accordingly next year’s Champions League) between Napoli, Roma and Inter.

Currently Napoli are just five points clear of Roma, whilst the Rome club itself is just four clear of Inter. Next Monday’s Roma v Napoli clash at the Olimpico could decide the race for second place, especially given that Higuain returns from his three match ban for this one. On top of that, Roma look to have a tougher fixture list with an away fixutre against Milan on their last day of the season on a day when Napoli will be at home to relegation battler (if not relegated by then) Frosinone.

Having won nine of their ten games between the end of January and the beginning of April, the new look, Luciano Spalletti-coached Roma have lost just a little of their momentum in their last two games, a 1-1 draw with Bologna and a 3-3 draw with Atalanta on Sunday. Not only were these both games that Roma might well have won, but they also rekindled the question of what to do with 39-year-old club icon, Francesco Totti.

Brought on at half-time against Bologna, Totti not only set up Mohamed Salah’s second half equaliser but he also appeared to add something to his team’s attacking options. Brought on for the last quarter hour of Sunday’s game against Atalanta, Totti scored Roma’s 86th minute equaliser for a 3-3 result.

Anticipating a pro-Totti wave of Roma fan enthusiasm, Spalletti got his retaliation in first, after the Atalanta game, saying:

“Totti didn’t save anything, it was the team which saved the day. Even three years from now, Totti could score that goal because he has got feet like no one else in the world. But there are other things to take into consideration, his ability to run, to get a hold of the game…This does not change anything for me…Remember, we won nine games without him…”

“Spalletti, You Have To Surrender. Totti IS Roma”.