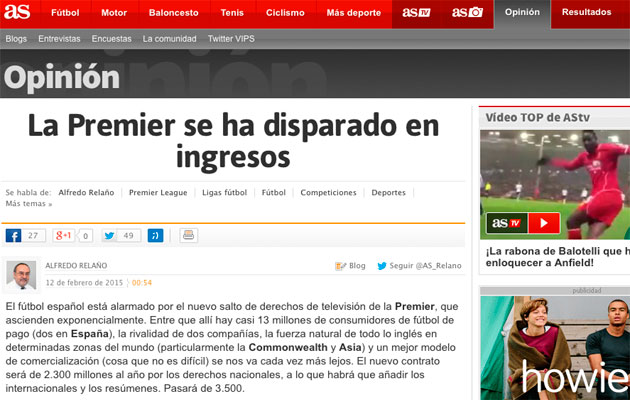 News of the Premier League’s stratospheric new TV rights package certainly had the rest of Europe clucking enviously and wondering whether their own respective champions could ever match the English game for marketability.

In Germany, Hamburger Morgenpost, made the comparison that while English top-flight clubs were licking their lips at the prospect of sharing out 6.9 billion euros in 2016-19, the German Football League (the DFL) only will receive 835 million euros for the 2016-17 season. Just to twist the knife a little a further, noted that once overseas rights are factored in, the boardroom suits in London, Manchester, Liverpool and the Midlands will collect more than eight billion euros for their televisual properties.

“Incredibly all 20 teams in the Premier League now automatically belong in the 40 richest clubs in Europe,” declared Morgenpost. “The enormous leap forward of the English league, which is second only to the NFL as a cash generator, still prompts a lot of criticism in the Bundesliga. Over in England, they have become used to paying vast sums for average players. Whereas here the 32 million euros which Wolfsburg recently paid for Andre Schürrle sparked a lot of controversy. In England such a fee is peanuts.”

According to Morgenpost, the DFL are aiming to seal a one billion euro deal when the rights for the 2017-18 are negotiated next year and though confident of achieving of such a figure for the “World Champion League” it will still leave the Germans playing serious catch-up.

At Le Figaro in Paris, Baptiste Deprez took the obvious line of comparing the broadcast income streams in England with those in the upper echelons of Ligue 1 and for any French club hoping to compete in Europe, it would not have made for happy reading: “Thanks to Sky and BT, the English championship will benefit from the record sum of 2.3 billion euros a season. And with this agreement even the last-placed side in the Premier League will bring in 136 million euros per year. That’s to say more than three times what Paris Saint-Germain earned when winning the French title in 2013-14.

“A gulf separates French from European sides in the matter of TV rights. PSG look like poor relations. In 2013-14, the Parisiens made just 44.6 million euros, more or less the same as Fiorentina, the seventh-placed club in Serie A that season and much less than the 74.5 million euros which Cardiff City, the Premier League’s bottom club. The domination of English football isn’t close to going away.”

Nor could leading Italian daily, La Repubblica, see any sign at all of the Premier League TV juggernaut slowing down: “This new deal is the conformation of the ever increasing appeal of English football.

Only NBA basketball or NFL American football are in a position to keep up with the (Premier League) goldmine, which in the last 25 years has rocketed into the stars.

“In 1990 the BBC paid just three million sterling for weekly highlights and 14 live games. Today, that would not be enough to transmit a half-hour of one of the 168 live matches on offer.”

Despite boasting clubs of the prestige of Real Madrid and Barcelona and constantly winning praise for its technical quality, Spain’s La Liga currently only brings in 840 million euros a year and in the eyes of many Iberian observers, the time to wake up has come, with many claiming that stagnation is only to be expected when the Big Two rule the roost.

“The idea of Real Madrid and Barca enjoying more of the revenue on the grounds that their universal popularity benefits our league as a whole, has not worked, leaving us with an uncompetitive championship,“ argues As editor, Alfredo Relano.

“In England, TV monies are divided in a fairer way amongst the clubs and as a consequence, their deals grow bigger and bigger. A fairer distribution has been promised many, many times by Cardenal [Miguel Cardenal, the Secretary of State for sport]. But it has yet to be done.

“However there’s more to it than that. The Premier League is about full stadia, perfect pitches, sensible schedules of games and encounters which are generally noble. It’s a league which caters for society with games played over Christmas. Here we think that the public should serve football. We’ve been acting the fool for too long.”