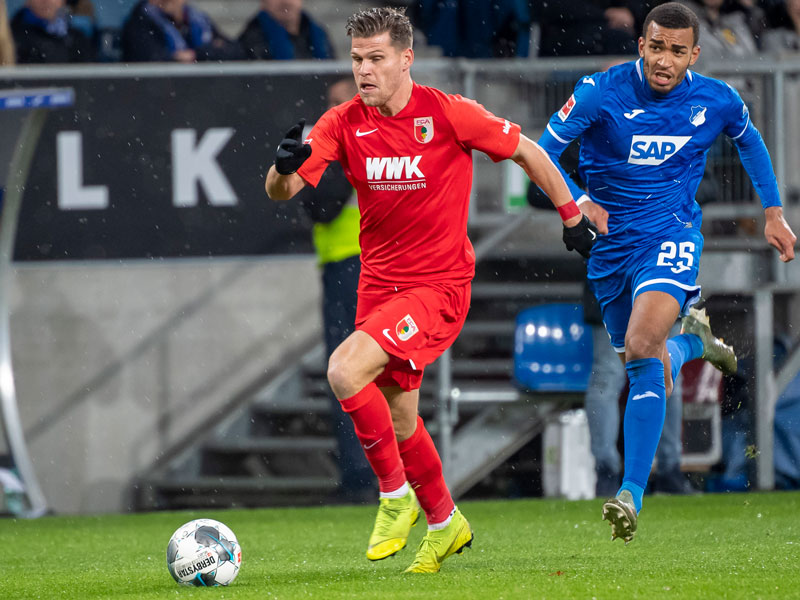 Productivity clearly is no problem for Augsburg striker Florian Niederlechner, who in a recent 4-2 victory at Hoffenheim put on an otherworldly one-man show, setting up three goals and winning a penalty converted by teammate Philipp Max.

A rare feat indeed. Over seven years have passed since a Bundesliga player last recorded four assists in a single game, the Hungarian midfielder Szabolcs Huszti achieving the feat for Hannover early in the 2012-13 season

It’s not the first time the 29-year-old Niederlechner has been in record-breaking territory. Back in November 2016, while playing for Freiburg, he picked up the quickest yellow card in Bundesliga history, booked after just eight seconds against Mainz.

Bought for only 2.5 million euros from Freiburg this summer, the Bavarian has proved a stunning acquisition in every way. Once exclusively thought of as a feisty, no nonsense target man, he suddenly seems to have developed an extra dimension or two. He looks more aware and mobile, is cuter on the ball and has made enormous strides as both a creator and finisher.

Following a poor start to the season, Augsburg are now sitting far more comfortably in mid-table and if anyone exemplifies their aggressive quick-transition playing style, it is ‘Flo’. He can wield the rapier as well as the bludgeon and is a beast when launching the opening pressing wave.

The desire and determination he displays week in and week out undoubtedly stems from the many difficulties he has had to overcome in his career. A 1860 Munich fan, he was let go by the Lions at the age of 12 – told he was small and slow – and just eight years later, was still treading water, only operating in the fourth tier of the German pyramid with Bavarian outfit Ismaning.

Earning a living as industrial salesman, his pro football dream appeared extinguished. But somehow, step by step, he was able to relight the fire, emerging as a fine second division goalscorer with Heidenheim, earning a move to top-flight Mainz – which did not especially work out – and making the grade for Freiburg.

Good things, can, on occasion, take time to develop. “I’ve had to go a different route to get to where I am,” he says. “I’ve had the sort of experiences which other professionals cannot imagine. As a salesman, I would get up at five in the morning, do a day’s work and then train in the evening. I can really appreciate being a full-time footballer.”

Young Schalke goalkeeper, Alexander Nubel is going to find it very hard to live down his kung-fu kick assault on Eintracht Frankfurt midfielder Mijat Gacinovic. Racing from his goal, Nubel not only planted his studs in Gacinovic’s chest, but also sent the Serb sprawling with his forearm. Nubel rightly received a straight red-card and needless to say, many in the German media were quick to liken his ‘intervention’ to Harald Schumacher’s infamous brutal attack on France’s Patrick Battiston in the 1982 World Cup semi-final. Naughty Nubel will now have to serve a four-game ban.

Teenage Koln frontrunner Jan Thielmann enjoyed the perfect pro debut in the Rhineland derby with Leverkusen. His side ran out 2-0 victors and at the tender age of 17, he became the first Bundesliga player to be born in 2002. “Jan played outstandingly,” gushed Koln sport director Horst Heldt. “He was only told he was playing during the pre-match briefing. We thought, the later we leave it the better.”