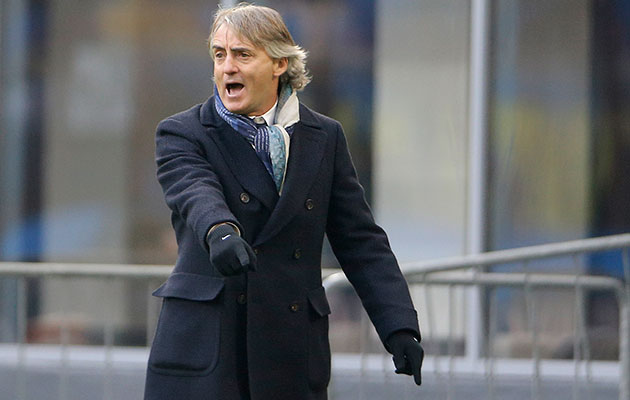 It seems that every time you see Inter coach Roberto Mancini on the sidelines these days, he is in state of barely controlled anger. However, perhaps some of his recent outbursts have been, if not justifiable, well at least understandable.

A couple of weeks ago, he got into a fury when Napoli coach Maurizio Sarri called him a “froscio” (queer) and a “finocchio” (fennel or poof) towards the end of Inter’s 2-0 Italian Cup quarter final defeat of Napoli. Sarri was probably being more of a bad loser than a homophobe but Mancini’s indignation was reasonable, if exaggerated.

Mancini’s most recent outburst, obviously, came during Sunday night’s Milanese derby when his Inter were beaten 3-0 by city cousins, Milan. After he had vehemently protested one refereeing decision early in the second half, Mancini was justifiably sent off by referee Antonio Damato.

Roundly contested by some Milan fans as he made his way to the dressing room, Mancini responded in kind, unforgiveably making the middle finger gesture at the fans. Later, when he was asked about this incident on Mediaset TV (incidentally owned by Milan proprietor, Silvio Berlusconi), the still furious Mancini again lost his cool, admitting that it had happened but cutting short the interview:

“OK, I gave the finger to eight or nine (Milan) fans who were being abusive. OK, so I did it, are you happy now. I said that I did it, end of the story…What a load of nonsense…”

Mancini’s behaviour was so over the top that within two hours he had to issue an apology on his Twitter handle, writing:

“I apologise for an angry gesture that I should never have done”.

Mancini’s angry outbursts are hard to forgive, even if understandable. Sunday’s loss means that in the space of a month Inter have slipped from top of the table to fourth place, all of nine points behind the leaders Napoli and seven points behind second placed Juventus.

Sunday night’s vital tie was one of those games when nothing went right for Inter. In a match which opened up with both sides immediately willing to “have a go” at their cousins, rather than play a cautious, canny “wait and see” game, Inter might well have stuck the first blow. His four man frontline of Serb Adem Ljajic, Montenegrin Stevan Jovetic, Croat Ivan Perisic and newly purchased Italo-Brazilian Eder, ex-Sampdoria, looked as if it meant serious attacking business.

Within ten minutes, Inter might have been ahead when Eder failed to knock home a terrific cross from left back Juan Jesus. Unmarked and with only goalkeeper Gigi Donnamura to beat, Eder headed high and wide. Even when they were 1-0 down at the end of a first half in which Milan looked the more dangerous, Inter were not out of the match. That Milan goal had come through an imperious header from Brazilian defender Alex after he had been set up by Japanese midfielder Honda, who had one of his best ever games for Milan in this derby.

The second half saw two important turning points. The first came when Milan’s 16-year-old boy wonder goalkeeper, Gigi Donnammura, completely “skewed” a pass back from Alex. He so “skied” his clearance that it came down in his penalty area. At that point, Donnammura moved quickly in a race to beat Eder to the loose ball.

Donnammura got there first all right clearing the ball with his hands but not without banging into Eder, appearing to bring down the Italo-Brazilian. Inter appealed for a penalty and when referee Damato rejected their appeal, Mancini’s ill tempered reaction got him sent off.

Damato had been right not to award a penalty but he had still got the rules wrong because in that situation, the goalkeeper is not allowed to handle the ball a second time until it has been touched by another player. In all fairness, Inter should probably have been awarded an indirect free kick in the penalty area.

That particular incident underlined very clearly that Inter were still in the game, a point that became obvious in the 66th minute when Inter’s Argentine, Mauro Icardi, who had just come on for Jovetic, won himself a penalty, having been brought down by Brazilian Alex. Here again, the referee might have handed Alex a second yellow card for his foul but he chose to let that one pass.

Much worse was to follow because Icardi took the penalty himself, smashing it against the post and failing to score an equaliser that Inter hardly deserved. At that point, it was effectively all over. A demoralised Inter gave up the ghost and went missing for the last 20 minutes of the match, when first Colombian Carlos Bacca and then 21-year-old Frenchman, M’Baye Niang wrapped up the business.

With just five points from their last six league games, one time title contenders Inter now look to be right out of the championship contest. All the more so because whilst third placed Fiorentina faltered again in a 0-0 draw with Genoa, the top two motored even further away from the pack, with Juventus trouncing Chievo 4-0 away and with Napoli allowing Empoli a one goal start but still going on to win 5-1 (with Argentine Higuain getting one of the goals to maintain his perfect average of one goal per game this season). A​s for derby winners, Milan, even the ever optimistic Berlusconi admitted on Sunday night that a Europa League qualification represents the height of their current ambitions.

It hardly needs pointing out, but the Serie A title contest is now a two horse race and one which is likely to go all the way from here to May. First staging post comes on Saturday week (February 13th) when Juventus entertain Napoli at the Juventus stadium in Turin. One suspects, however, that whatever the result there, that match alone will not end the Juve-Napoli battle.