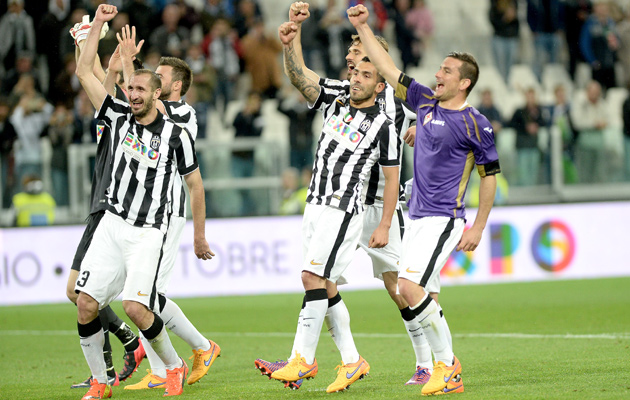 For the Old Lady Juventus, this has been another very profitable weekend – or at least it was until that Monday’s Champions League draw took place.   Even as Juventus were celebrating their sixth successive league win, following an impressive 3-1 home defeat of Fiorentina on Sunday night, their thoughts were already on Monday’s Champions League draw.
Team director Giuseppe Marotta had exactly the same idea as at least seven of his European colleagues.  There are three teams we want to avoid, he said, listing the all too obvious Holy Trinity of Barcelona, Real Madrid and Bayern Munich.   Eh voila, for the second time in four seasons, Juventus find themselves pitted against the mighty Germans.
“In the league championship, your quality always comes through at the end of a competition of many games.   However, in a knock-out tournament, the draw can decide things for you and you need to be lucky…Bayern are always Bayern”, commented an obviously not too pleased Marotta on Monday afternoon.
When the two sides met in the quarter finals of the 2012-2013 season, Juventus looked like an inexperienced and overwhelmed rookie as they went out 4-0 on aggregate to Bayern.  Three seasons later, we can expect Juventus to put up much more of a fight given that,  after their excellent run last season all the way through to the final, lost to Barcelona, they hardly qualify for the rookie class.
However, Marotta’s anxiety is more than understandable, as is his point about quality showing through in the league, in the long run.   After seeing off a potential title rival in Fiorentina, the Old Lady has now moved into fourth place, six behind leaders Inter,  two behind both Fiorentina and Napoli and one ahead of Roma.
Given that after they had lost 1-0 to Sassuolo at the end of October, Juventus were in 12th place, closer to the relegation zone than to the top of the table, this has been quite a turbo-boosted comeback.   Juve’s Italian rivals are probably as disappointed with that Champions League draw as the Old Lady herself.   Some of them might have been hoping that a long drawn out, exhaustive Champions League spring campaign would have left Juve with less energy for the Serie A tussle.  Now, if Bayern were to eliminate Juventus so early, well then they could all expect the worse when Juve return to the Serie A fray.
As for Sunday night’s game, it is intriguing to observe the match stats.   Fiorentina, with their smooth passing, tiki-taka game had an overwhelming 62-38% possession dominance.  Yet, it was the terrifyingly concrete Juventus who found the back of the net three times, whilst Fiorentina’s only real shot on goal was the dramatic 3rd minute penalty goal scored by Slovene Josip Ilicic.
Intriguingly, after a game which for 75 minutes had been played out on a 1-1 scoreline,  following Juan Caudrado’s fifth minute equaliser, it was Croat Mario Mandzukic who scored the all decisive second goal for Juve in the 80th minute.   Remember, it was this same Mandzukic who three years ago hammered the final nail in the Juventus coffin when scoring Bayern’s first goal in the Turin quarter final, return leg.
Just to underline the notion that ball possession does not guarantee success, Napoli too failed to make the most of 58-42% possession dominance in their 0-0 home draw with Roma.   For once, Roma abandoned any notion of mixing it with Napoli and, most uncharacteristically, concentrated all their efforts on defence.   Stats lovers point out that you have to go back seven seasons to find the last time that Roma had not even one shot on goal in a Serie A game.
That may well be but it would also seem the Maurizio Sarri coached Napoli are still suffering from top of the table vertigo, in the wake of that unexpected 3-2 defeat by Bologna last week.   Since then, Napoli have rounded off their Europa League group in spectacular style beating Legia Warsaw 5-2 for their sixth consecutive group win to record a goal difference of 22-3.
Given that sort of form, clearly Napoli still have plenty to say in the championship contest.  It would most probably be a mistake to read too much into a 0-0 draw, determined by Roma’s negative approach.    As for Roma, they are still licking their wounds and will want to recover significantly if they are to pose any sort of threat to Real Madrid in their second round Champions tie.   Mind you, for once history is on Roma’s side since when the sides last met in the Champions League in the 2007-2008 season, Roma won both legs 2-1.   That, however, was a long time ago and those were the days of respective icons, Raul Gonzales and Francesco Totti.
Meanwhile, of course, Inter continue to motor on at the top of the table.   Following their 4-0 win over Udinese, they are now out in front on their own, four points clear of both Napoli and Fiorentina.   Inter have not always impressed everyone but they keep on knocking in the points.
Last weekend’s destruction job away to Udinese makes the point.   It is not that Inter really pummelled Udinese, rather the Friuli side made not one but three defensive “howlers” to send Roberto Mancini’s side on their way.   No matter what happens in their home tie with Lazio next week, Inter will get to Christmas on top of the table and who knows, it may prove hard to knock them off in the New Year.   Remember, unlike their mains rivals, Inter have no “European” competition distractions.
Final thought – it would be stretching things a bit to suggest that Italy were worried by their Euro 2016 draw last Saturday.   A November friendly in Brussels with the top seed in their group, namely Belgium, suggested that Antonio Conte’s Italy are not that far off the pace set by the world’s number one side.  On top of that, neither Zlatan Ibrahimovic’s Sweden nor Martin O’Neill’s Ireland, whilst worthy of total respect, are going to cause Conte any sleepless nights.